(UroToday.com) On the third day of the American Society for Clinical Oncology (ASCO) Genitourinary Cancer Symposium 2022 in a symposium focused on biomarkers and therapies in renal cell carcinoma (RCC), Dr. Hass presented on considerations for adjuvant and consolidative therapy in patients with oligometastatic RCC. To this end, she highlighted the tension in this disease space of avoiding both overtreatment and undertreatment.

First addressing the question of patient selection, she highlighted data from surgical metastasectomy experiences which provide some guidance regarding those patients who are likely to benefit from the aggressive local intervention for oligometastatic disease. These characteristics include patients with a limited extent of disease, particularly when limited to the lung. Further, asynchronous disease, with a disease-free interval of more than 12 months, is associated with improved outcomes. Conversely, patients with multiple, synchronous metastases, particularly when they are unable to be completely resected, fair poorly.

However, surgical excision is not the only local treatment approach. She highlighted data from Dr. Chalkidou published in Lancet Oncology which examined the role of stereotactic body radiotherapy (SBRT) for oligometastatic cancer. Among 1422 patients enrolled at 17 sites in the United Kingdom, patients with renal cancer comprised 143. Patients had to have three or fewer sites of disease at least 6 months after treatment of the primary. Overall, overall survival was 92% at 1 year and the most common grade 3 toxicity was fatigue occurring in 2%. In the subset of patients with renal cancer, outcomes were even more favorable with 1 and 3 year overall survival rates of 95% and 82% respectively. Work from Dr. Tang and colleagues have also shown that SBRT may be used a definitive therapy in lieu of systemic therapy for some patients with oligometastatic disease. In a small, single center, phase 2 feasibility trial among patients with five or fewer sites of disease, the median progression-free survival was nearly 23 months and 1 year progression-free survival was 64%. Further, treatment was quite well tolerated with 2 and 1 of 30 patients developing grade 3 and grade 4 adverse events, respectively.

To better assess this, the SOAR trial has been designed as a phase III randomized trial of sequential SBRT to all metastasis with standard of care systemic therapy compared to systemic therapy alone among patients with mRCC who have previously undergone nephrectomy and have favorable or intermediate IMDC risk disease with 2-5 metastatic sites that are amenable to SBRT. The primary endpoint is overall survival. 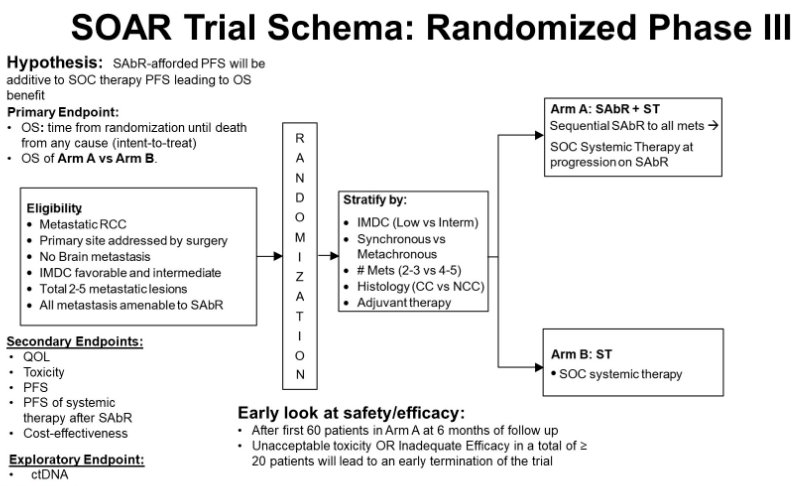 Moving from local therapy to systemic therapy, Dr. Hass considered the question of adjuvant therapy following metastasectomy. There are two trials of vascular endothelial growth factor receptor (VEGF-R) tyrosine kinase inhibitors (TKIs) in this space: the M1NED EA1810 examining adjuvant pazopanib compared to placebo and the RESORT trial comparing sorafenib to observation, each of which considered a synchronous or metachronous disease. Each of these failed to show a benefit to this approach.

Moving with the overall evolution of treatment in advanced RCC, Dr. Haas highlighted trials assessing the role of immunotherapy using immune checkpoint inhibitors in this disease space. The KEYNOTE-564 trial includes a subset of patients with M1 disease who underwent full surgical resection within the year prior to index; IMmotion010 includes a selective M1 population (with soft-tissue, lymph node, or lung metastases) who have either synchronous or metachronous disease; and PROSPER includes patients with M1 disease who are treated either with resection or radiotherapy in the 6 months prior to entry.

She then further considered the available data from KEYNOTE-564 examining pembrolizumab monotherapy, wondering whether this is sufficient duration of therapy and whether monotherapy is enough? In subgroup analyses of the primary analysis of KEYNOTE-564, the M1 NED subset derived a greater benefit from adjuvant pembrolizumab than did the overall study cohort.

Moving forward, she highlighted numerous opportunities including biomarker analysis such as circulating tumor DNA and whole exosome sequencing; cell-free methylated DNA immunoprecipitation with high-throughput sequencing; kidney injury molecular-1 (KIM-1) over expression which is being examined within the PROSPER trial, and transcriptomic clusters which have demonstrated predictive ability in the metastatic setting.

Dr. Haas further highlighted a number of unanswered questions in terms of the duration of adjuvant therapy required in patients with surgically or radiotherapy managed oligometastatic disease, the intensity of adjuvant therapy required (monotherapy or combination therapy), the risk-balance trade off of toxicity. Thus, she emphasized the need for a consolidative trial, oligo-progression trials, and de-intensification trials. Across each of these, there is a pressing need for better biomarkers to guide treatment choice. These biomarkers may be used either for prognostication following treatment or for treatment decision making. 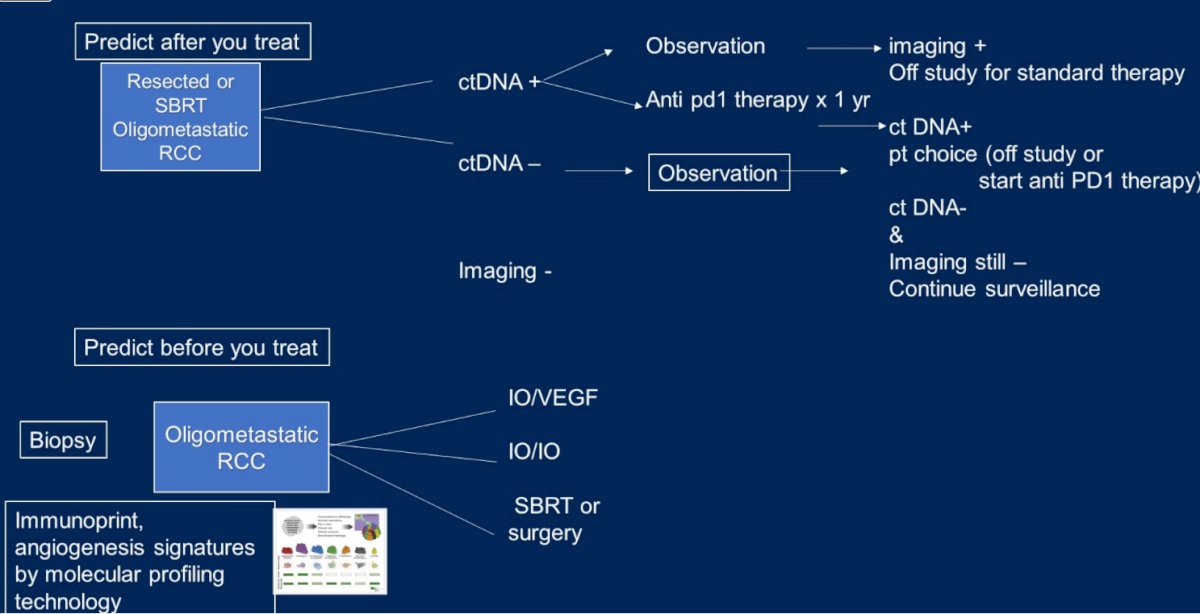