By way of background, tivozanib is an oral vascular endothelial growth factor (VEGF) tyrosine kinase inhibitor (TKI) that is FDA-approved for the treatment of patients with relapsed/refractory aRCC following at least two prior lines of therapy on the basis of results from the TIVO-3 trial. This study showed that tivozanib significantly improved PFS compared to sorafenib in the primary independent review committee [IRC] analysis (HR: 0.672, 95% CI: 0.52-0.87). In the present analysis, the authors assessed long-term survival without disease progression (LT-PFS) in the context of this study.

While previously published, to briefly summarize, TIVO-3 is a phase 3 global, open-label randomized controlled trial comparing tivozanib to sorafenib in patients who had previously received at least two lines of therapy for aRCC. 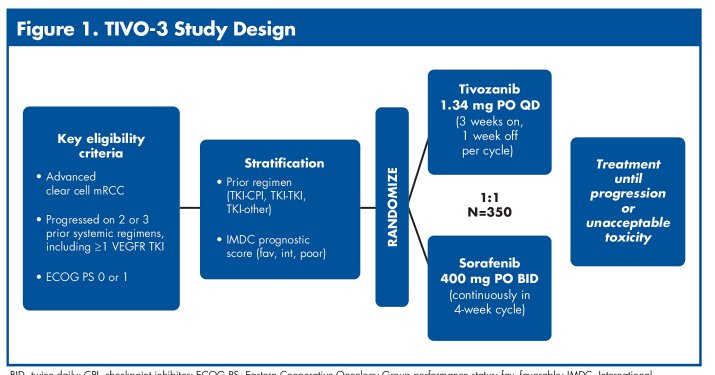 This report presents results of an exploratory analysis of LT-PFS and long-term overall survival (OS) using investigator assessment with a data cut-off of May 24, 2021. PFS hazard ratio and landmark values of LT-PFS at 6, 12, 18, 24, 30, 36, 42 and 48 months are reported. Results include the ITT population, with censoring for missing assessments and discontinuation without progressive disease. The authors used cox proportional hazards and log-rank statistics to estimate the HR and 95% CI for INV-PFS and OS; odds ratios (ORs) are reported for landmark timepoints up to 36-months. LT-PFS across prespecified subgroups were analyzed descriptively.

The TIVO-3 trial randomized 350 patients in a 1:1 fashion, the authors found that investigator assess LT-PFS was longer among patients who received tivozanib, compared to sorafenib (HR: 0.624, 95% CI: 0.49-0.79). Additionally, landmark LT-PFS rates up to 48-months were consistently higher among patients randomized to receive tivozanib, with 12% vs 2% and 7.6% vs 0% at 3- and 4-years, respectively. 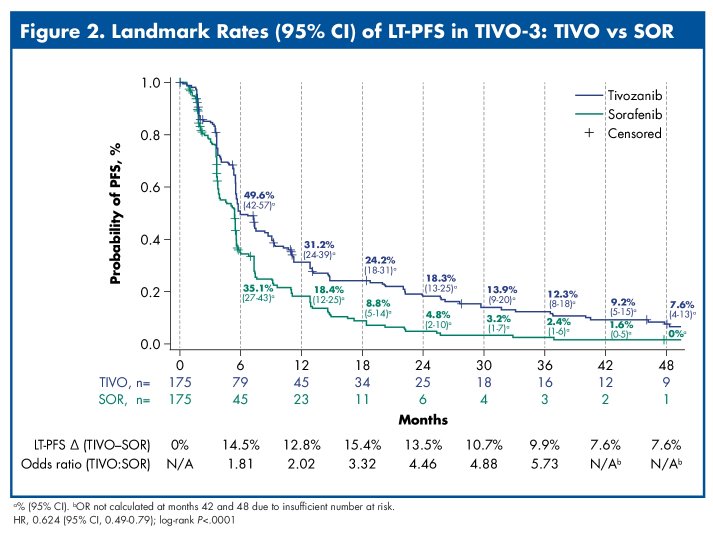 While limited by low numbers of patients at risk with extended follow-up, subgroups with ≥15% LT-PFS at 3-years include IMDC favorable risk, female gender, ECOG PS0, age ≥65 years, and region NA – all confined to those who receive tivozanib.