(UroToday.com) The 2022 GU ASCO Annual meeting included a renal cell carcinoma (RCC) session featuring work from Dr. Matthew Zibelman and colleagues presenting results of a phase I/II study of nivolumab and axitinib in patients with advanced RCC. Combination systemic therapy with tyrosine kinase inhibitors (TKIs) and an immune checkpoint inhibitor (IO) are an established standard of care for patients with metastatic RCC. This trial was performed to investigate the safety and efficacy of combining the TKI axitinib with the IO agent nivolumab.

This phase I/II study investigated the combination of axitinib and nivolumab in an initial dose finding phase I portion with a 3+3 design to determine the recommended phase 2 dose (RP2D) of axitinib. The phase II portion included 2 parallel arms: treatment naïve metastatic RCC patients and metastatic RCC patients previously treated with TKIs alone or IO/IO combination (NCT03172754). This report focuses on results from the treatment naïve arm only. Included patients had to have histology with any clear cell component, ECOG performance status of 0-1, no known or symptomatic brain metastases, and no history of autoimmune disease. The RP2D of axitinib was 5 mg BID from the phase I portion and patients could be treated for up to 2 years. The primary endpoint of the phase II portion was objective response rate (ORR) per investigator assessment. The trial schema for this study is as follows: 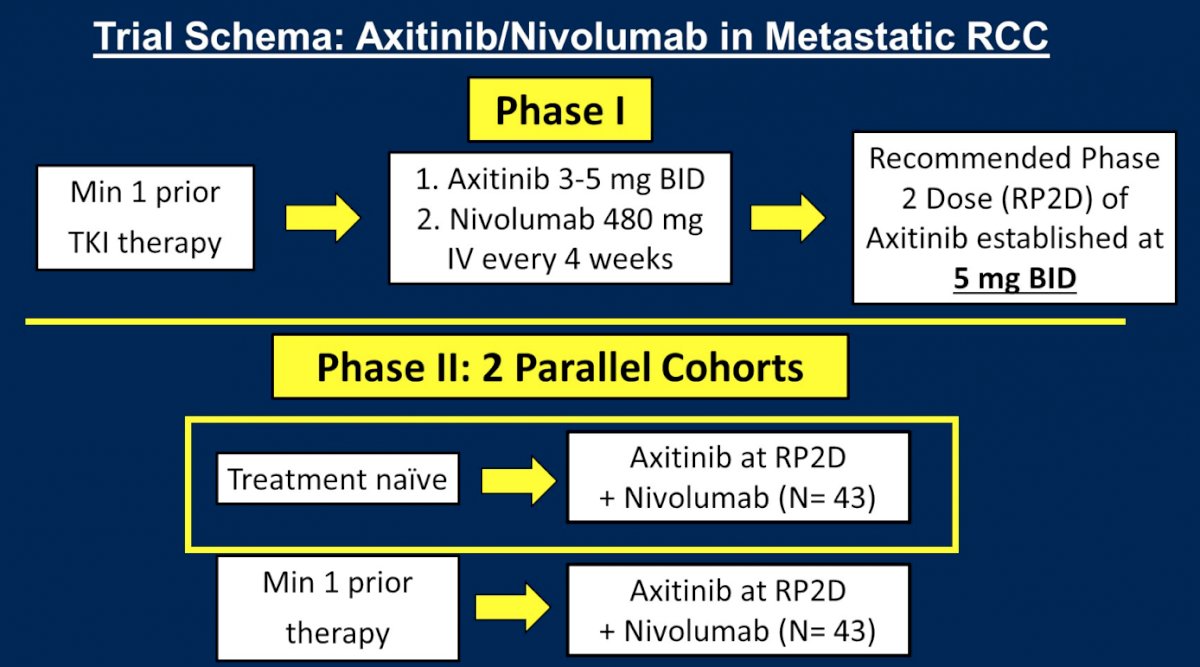 There were 44 patients accrued to the treatment naïve arm. One withdrew consent and was replaced but is included in the safety analysis, while 42 patients are evaluable for efficacy. The median age was 65 years (IQR 56-72 years) and the group was predominantly male (84.1%) and white (95.5%). Using the IMDC risk group grading, 18 patients (40.9%) were favorable risk, 23 patients (52.3%) were intermediate risk and 3 patients (6.8%) were poor risk. As follows is a summary of the baseline characteristics: 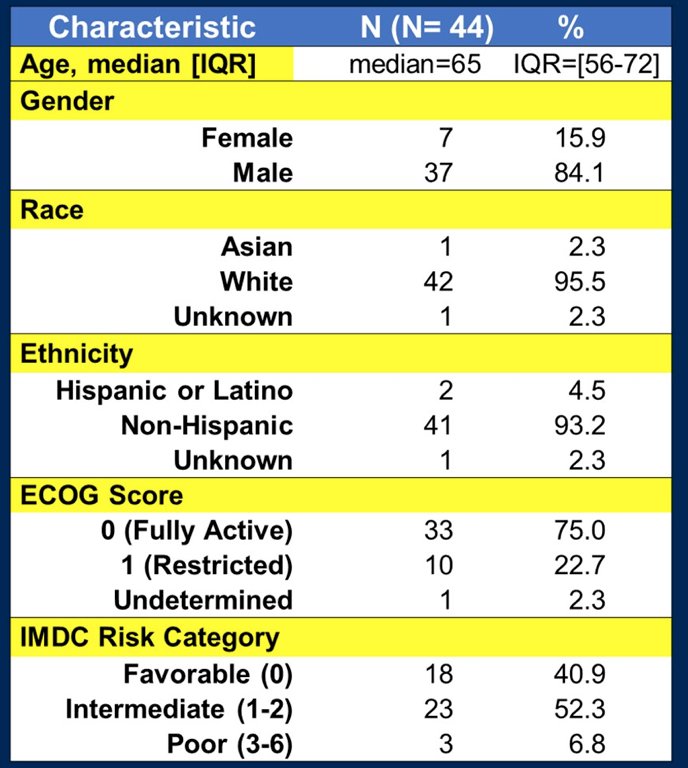 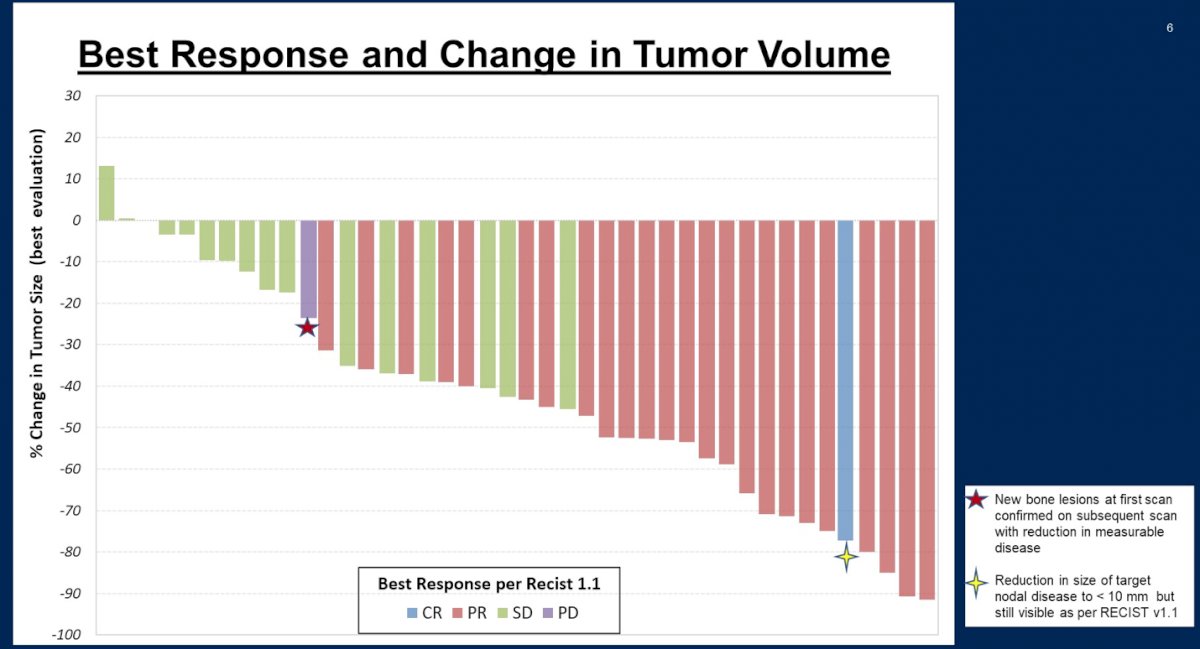 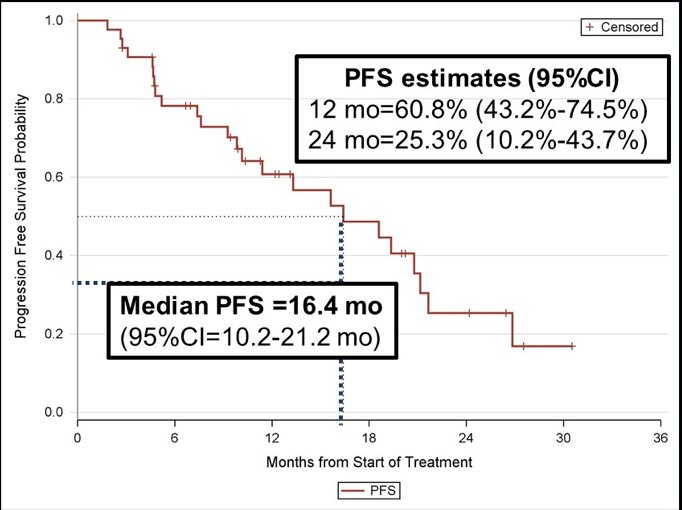 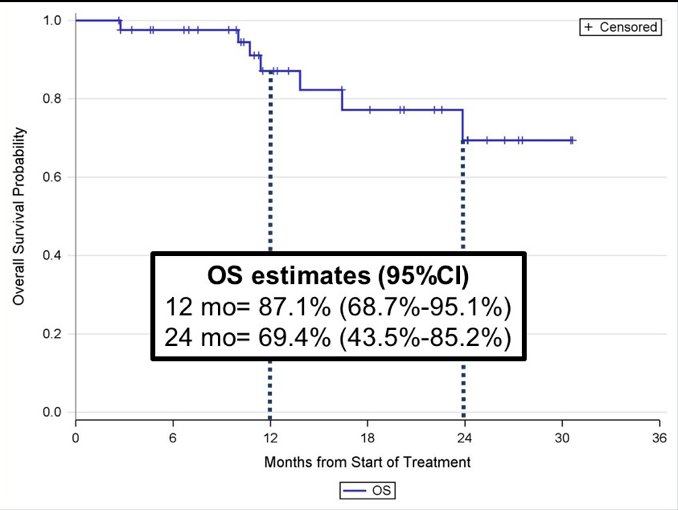 Adverse event data was similar to published data for IO/TKI combinations, with no grade 4-5 adverse events. There were 29 patients that experienced a grade 3 adverse event (70.7%), the most common of which was hypertension (41.5%), and 20.5% discontinued the study due to treatment-related toxicity.

Dr. Zibelman concluded this presentation of the phase I/II study of nivolumab and axitinib in patients with advanced RCC with the following take-home messages: