Dr. Alumkal first summarized the presentation from Dr. Feng which sought to identify which patients derived the greatest benefit from the androgen receptor (AR) antagonist apalutamide. To do so, they defined early progressors and long-term responders on the basis of quartile-derived event rates. They then looked at archived tumor specimens to construct molecular signatures which they tested against response quartiles. Dr. Alumkal emphasized that they used two different methods to identify signatures associated with response and resistance to therapy: the t-test method and a Cox regression-based approach. 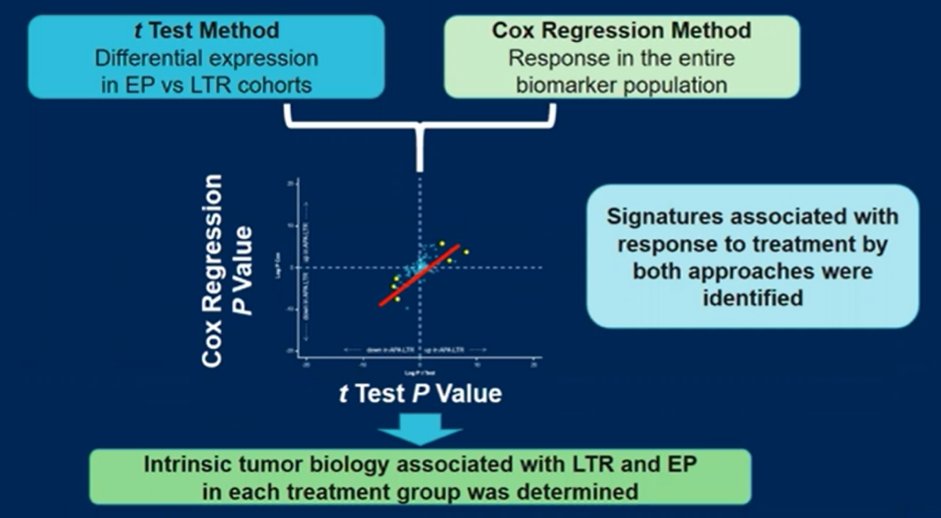 Across all quartiles of progression, the authors demonstrated that patients with evidence of T cell proliferation demonstrated longer MFS when receiving apalutamide + placebo, as compared to those with low T cell profiles. However, this wasn’t seen in patients receiving placebo, suggesting this is a predictive rather than prognostic biomarker.

Dr. Alumkal emphasized that this study is strengthened by the well-annotated cohort, the use of two different methods to identify significant signatures, and validated results in biomarker cohorts as a whole. However, there are limitations including the small number of cases used in the discovery cohort, a lack of correction for multiple hypothesis testing, and an unknown effect of these signatures in multivariable analysis.

Dr. Alumkal suggested that this work raises multiple questions including whether signatures in primary tumors and their microenvironments are predictive of response at the time of castration resistance; whether the identified signatures stand up to independent validation; whether the signatures are predictive of overall survival, rather than just MFS; and finally, it remains important to identify drivers among patients with early progression.

Building on the theme of escalation of androgen-receptor inhibition, Dr. Alumkal reviewed data presented by Dr. Rathkopf from the ACIS trial assessing the combination of apalutamide + abiraterone acetate (two approved prostate cancer treatment with distinct receptor inhibition and ligand suppression actions, respectively) as compared to abiraterone acetate alone in patients with chemo-naive mCRPC. At the time of preplanned analysis, ACIS met the primary endpoint of rPFS with treatment with apalutamide + abiraterone acetate associated with improved rPFS (22.6 months) compared to abiraterone acetate alone (16.6 months; hazard ratio 0.69 [95% CI 0.58-0.83]; p < 0.0001). However, a blinded independent central review was associated with an attenuated benefit (hazard ratio 0.86). Updated analysis at the final data cut-off demonstrated that rPFS remained improved in patients receiving the combination approach (hazard ratio 0.70, 95% confidence interval 0.60 to 0.83) with 7.3-month improvement in median rPFS. However, at the updated final analysis, no improvement in overall survival was noted with a hazard ratio of 0.95 (95% confidence interval 0.81 to 1.11). Dr. Alumkal noted that OS in patients in the abiraterone only arm of ACIS was similar to that observed in the abiraterone arm of COU-302.

Dr. Alumkal showed further data suggesting that the use of biomarker selection could identify patients who derive greater benefit from the combination approach, notably with patients PAM50 liminal and AR activity average or high profiles.

Notably, prespecified secondary endpoints did not differ between groups. He emphasized that most patients at the time of progression received chemotherapy regardless of treatment arm. Interestingly, Dr. Alumkal noted that the similar rPFS #2 in the two arms (despite improved rPFS #1 in the combination arm) suggests that second-line therapies may be less efficacious in patients who receive upfront combination therapy. He further noted that toxicity was higher with combination therapy.

Dr. Alumkal highlighted that this study is strengthened but its large, international nature; the use of an active control arm; and the blinded nature of randomization. However, the primary endpoint of rPFS was investigator-assessed and this differed (was longer) than blinded central review. Further, combination therapy was more toxic, cost more, and failed to demonstrate a benefit in overall survival.

To understand this study, it is important to contextualize it while considering the question of AR-targeting with escalation or sequencing. The work from Attard et al. and Khalaf et al. suggest that the use of AR-targeting agents may confer relative resistance to subsequent use of abiraterone. 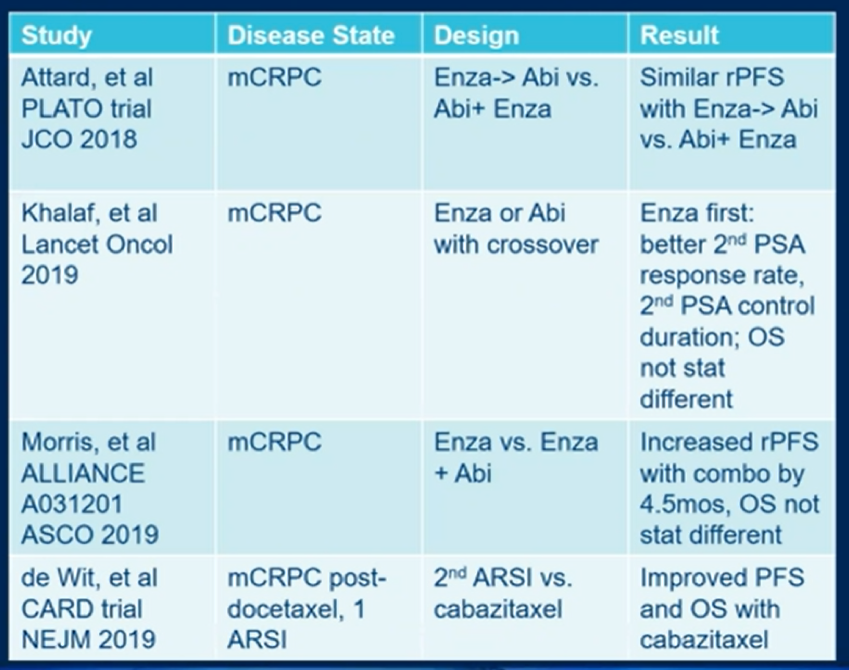 Morris et al. used a very similar design to the ACIS trial with enzalutamide alone or in combination with abiraterone, similarly finding improvements in rPFS but not OS. Finally, in the CARD trial, de Wit demonstrated that cabazitaxel may be preferable for patients who progress following AR-targeting.

In summary, Dr. Alumkal concluded that more mature survival data will help to determine whether there is a benefit to escalated AR-targeting with apalutamide and abiraterone. However, at the time being, he does not feel that these results should change practice. TO move the needle, he emphasizes the importance of understanding the biology of patients who fail to benefit from AR-targeting agents. To do so, transcriptional profiling may allow the identification of such patients with basal lineage signatures and low AR-activity.

Considering both trial design and clinical care, he emphasized the importance of understanding the biology of the tumor in an individual patient before us.