(UroToday.com) Next-generation sequencing has increasingly been incorporated into the standard of clinical care for advanced prostate cancer.  The most widely-acknowledged use is in the evaluation of genomic alterations in the genes controlling homologous recombination (HR), the apparatus for repairing double-stranded DNA breaks.  Two FDA-approved agents (olaparib, rucaparib) exist for patients with tumors deficient in HR, both of which are poly ADP-ribose polymerase inhibitors.  Between these, the Phase 3 PROfound study demonstrated that treatment with olaparib significantly improved radiographic progression-free survival (versus physician’s choice of abiraterone or enzalutamide) in men with metastatic castration-resistant prostate cancer (mCRPC) and alterations in at least one of a subset of 15 genes involved in HR1.  The authors note that 31% of potential subjects had a failure of molecular screening, underscoring that available tissue is crucial for both entry into a molecularly-qualified trial as well as making real-world clinical decisions.  Dr. Chi et al. sought to evaluate the reliability of using plasma-based assays to detect deleterious mutations in BRCA1, BRCA1, and ATM (the gene alterations in Cohort A of PROfound).

Tumor samples were evaluated to evaluate trial eligibility prospectively using an investigational assay (based on FoundationOne CDx).  Matched plasma was collected and circulating tumor DNA (ctDNA) was assayed via FoundationOne CDx.  Among 619 ctDNA samples, 81% (503) yielded a result, of which 491 (98%) had a sequencing result from tumor tissue.  Detection of qualifying genomic alteration in tumor tissue was used as reference. Positive concordance for the aforementioned targets was observed in 81% (143/177, 95% CI 75-87); negative concordance was 92% (291/315, 95% CI 89-95).  The highest concordance was observed in frameshift, nonsense, and splice-altering mutations (Figure).  Dr. Chi highlights the strongest discordance in BRCA2 are in the setting of homozygous deletions and SV rearrangements being missed in ctDNA. 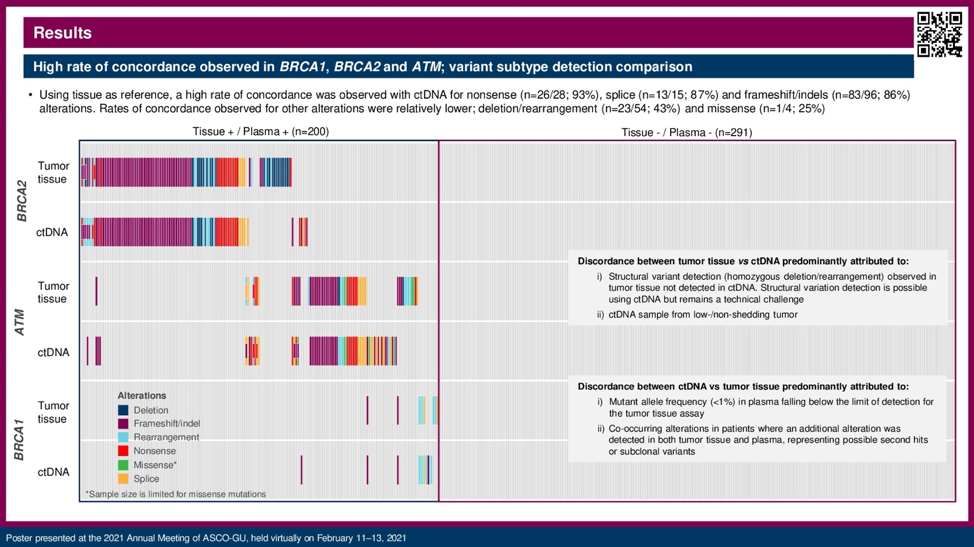 For these particular targets, concordance between alterations detected in tissue and ctDNA alterations was considered, supporting the use of a minimally-invasive approach to evaluate a patient’s qualification for PARPi targeted therapy, and perhaps platinum-based chemotherapy.  These data may make reliable genomic assessments made via ctDNA in subjects who are either unwilling or unable to undergo metastatic biopsy or who have insufficient tissue from such a biopsy, potentially sparing the expense and possible harm of an invasive procedure.  Similarly, the circulating compartment serves as an integration of the metastatic disease burden, not limited only to any single metastatic site biopsy.