Published 13 February 2021
(UroToday.com) Radiotherapy is a standard treatment for patients with localized prostate cancer. For patients with intermediate and high-risk disease, concurrent androgen deprivation therapy is commonly co-administered. However, there is an existing need to provide prognostication within this group of patients to allow for both treatment intensification and de-intensification. To this end, in a study presented during the Prostate Cancer - Advanced Disease Poster Session at the 2021 American Society of Clinical Oncology (ASCO) Genitourinary (GU) Cancers Symposium, Dr. Jonathan Tward and colleagues evaluated the ability of the combined clinical cell-cycle risk score (CCR) to prognosticate the risk of prostate cancer metastasis in men receiving dose-escalated radiation therapy (RT) with or without androgen deprivation therapy (ADT). 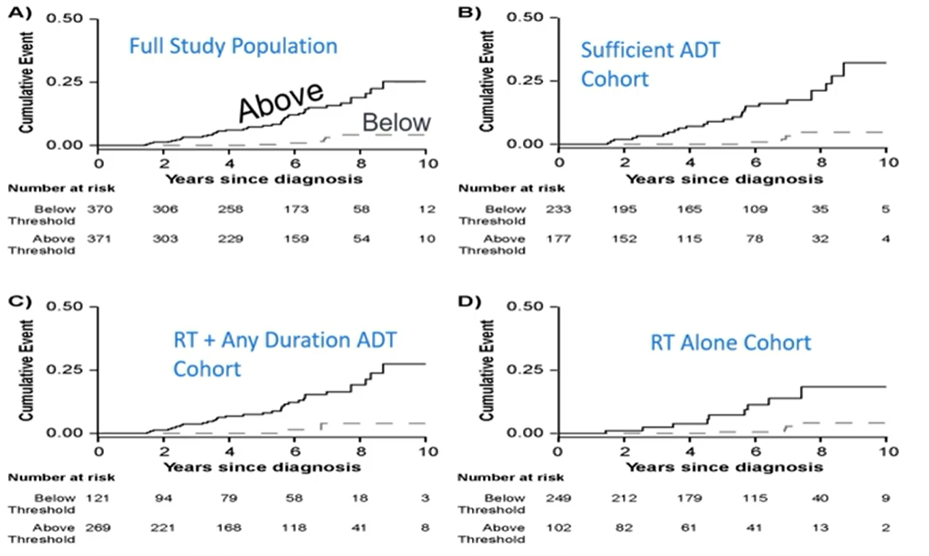 Interestingly, for men with a low risk of metastasis by CCR score, NCCN risk categories do not appear to be prognostic of metastasis risk suggesting that CCR may usurp risk stratification for prognostication, independent of ADT utilization.

While there is a relative benefit to the addition of ADT to RT that has been demonstrated in many cooperative group studies, Dr. Tward emphasized that the absolute benefit of such an approach depends on the underlying risk of metastasis in the population.

The authors, therefore, concluded that the CCR score is an accurate predictor of metastasis in men undergoing dose-escalated RT, with or without ADT, adding clinically actionable information beyond that available from other risk stratification approaches. Further, use of the CCR score may allow for treatment de-intensification for patients with low scores without compromising oncologic control.