(UroToday.com) As a part of the kindey cancer oral abstract session, Dr. Toni Choueiri presented preliminary results from a phase 2 study of belzutifan (MK-6482) in combination with United States Federal Drug Administration (FDA)-approved multiple TKI, cabozantinib.  As covered in other presentations throughout this year’s American Society of Clinical Oncology Genitourinary Cancers Symposium (ASCO GU), greater than 90% of people with clear cell renal cell carcinoma (ccRCC) harbor sporadic genomic alterations resulting in defective VHL protein and a pseudohypoxic state.  This latter point is the basis of the rationale for targeting HIF2alpha with belzutifan.

The study was comprised of two cohorts of patients with advanced clear cell RCC.  In Cohort 1, the patients were treatment-naïve; in Cohort 2, patients had previously received immunotherapy and/or TKIs.  The focus of the presentation was on preliminary results from Cohort 2.

Within Cohort 2, all subjects had metastatic disease and had received no more than two prior systemic therapy regimens.  Initially six patients received the trial treatment of belzutifan (120 mg) and cabozantinib (60 mg), both orally, daily for 21 days.   Efficacy was evaluated in patients who received at least one dose of treatment and had at least six months of follow up time.  Primary end point was objective response rate (ORR) by RECIST v1.1 via investigator review.  Secondary end points included progression-free survival (PFS), overall survival (OS), and duration of response (DOR). 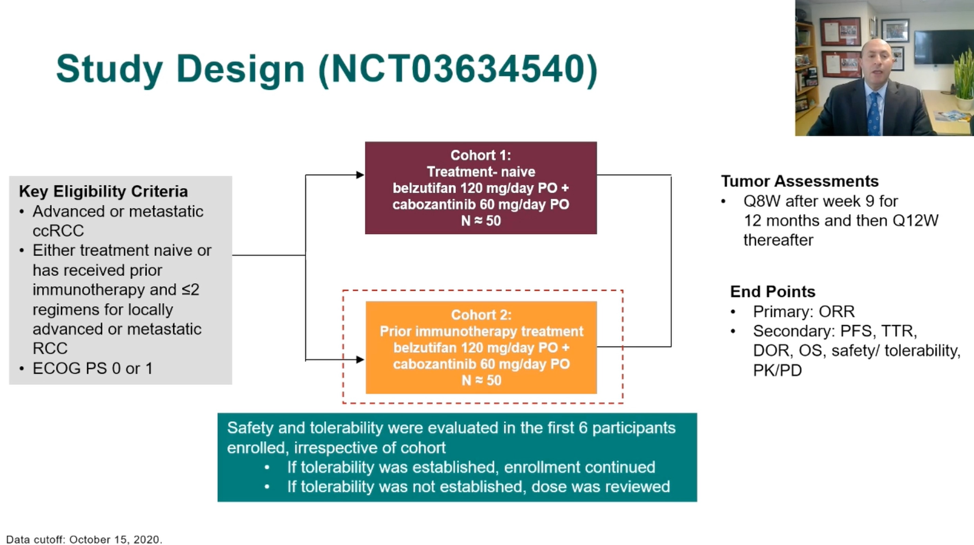 The aforementioned dosing regimen was administered to the first six patients with only one dose-limiting toxicity (hand-foot syndrome/palmar-plantar erythrodysesthesia) occurring, resulting in belzutifan 120 mg/cabozantinib 60 mg as the recommended phase 2 dose.  Demographic data were shared in tabular formation by Dr. Choueiri, notable for 52.8% and 45.2% of subjects having received prior first- or second-line therapies, respectively.  Confirmed ORR was 22.0% with 9 PRs, and 90.2% of subjects displayed any tumor shrinkage. Disease control rate, as defined as CR+PR+SD, was 92.7%.  The median duration of response (DOR) was not reached (range 3.7+ to 14.8+ months), as all responses were ongoing at the time of data freeze (15 October 2020).  Median PFS was 16.8 months (95% CI 9.2-not reached) and 6-month PFS rate was 78.3%.  OS at 6 months was 95.0%. 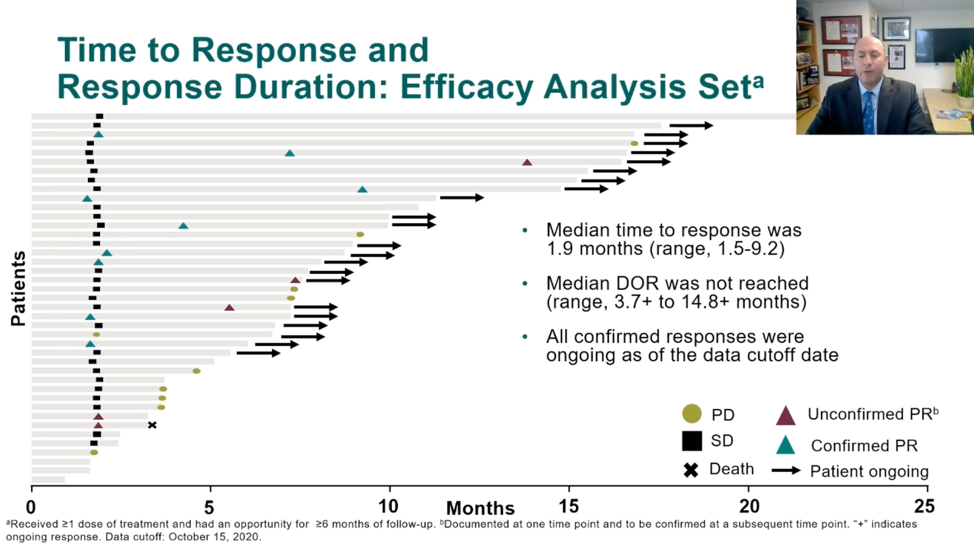 Taken together, Dr. Choueiri shared promising preliminary evidence for antiturmor activity of belzutifan in combination with multiple TKI cabozantinib. Although clearly optimistic, he emphasized the preliminary nature of the presented results and that any median numbers should not be relied upon yet.  As above, responses in Cohort 2 are ongoing; Cohort 1 (previously untreated patients with ccRCC) is recruiting now.  Although we will await more mature data, it is gratifying to see that targeting the mechanistic pathophysiology of pseudohypoxia at the level of transcription factors controlling downstream signaling which is also targetable (e.g. VEGFRs with cabozantinib).  The future must include evaluation of those subjects who may be resistant (or develop resistance) to these therapies and comparison in head-to-head studies.