Published 13 February 2021
(UroToday.com) Renal cell carcinoma (RCC) accounts for ~80%‒90% of all kidney cancers worldwide, with metastatic RCC (mRCC) portending a poor prognosis with a historical 5-year relative survival of 13%. The mRCC treatment landscape is rapidly changing with the approval of new therapies, which has recently been broadened by the FDA approvals of immunotherapy monotherapy in November 2015, dual immunotherapy in April 2018, and more recently immunotherapy-TKI combinations in April 2019. Despite the expanding number of available immunotherapy-based mRCC treatment options, data on the impact of immunotherapy approval on real-world treatment patterns and sequencing are limited. At the 2021 American Society of Clinical Oncology Genitourinary Cancers Symposium (ASCO GU), Dr. Saby George and colleagues presented results of their study investigating the characteristics, treatment patterns, and sequencing for mRCC patients in the real-world setting (December 2015‒May 2020) and in a subgroup analysis of post-dual immunotherapy approval in the United States (April 2018‒May 2020).


For this retrospective study, adults diagnosed with mRCC between December 2015 and May 2020 were selected from the Flatiron electronic medical record database. The Flatiron Health Database is a longitudinal database comprising deidentified patient-level structured and unstructured data curated via technology-enabled abstraction. The majority of the patients in the database originate from US community oncology settings and relative US community/academic proportions may vary depending on the study cohort. This study cohort was required to have ≥ 1 month of medical data from the initial mRCC diagnosis date (index date), and the start of first-line therapy was the first episode of an eligible therapy given after or up to 14 days before the diagnosis and after the patient’s start of structured activity. When a gap of >120 days occurred during drug episodes, the line of therapy number was advanced.  Descriptive statistics were used to analyze baseline patient demographic and clinical characteristics, treatment patterns, and treatment sequencing in the overall cohort and in a subgroup of patients initiating first-line therapy during or after April 2018 (the month after FDA approval of combination immunotherapy) through to May 31, 2020. 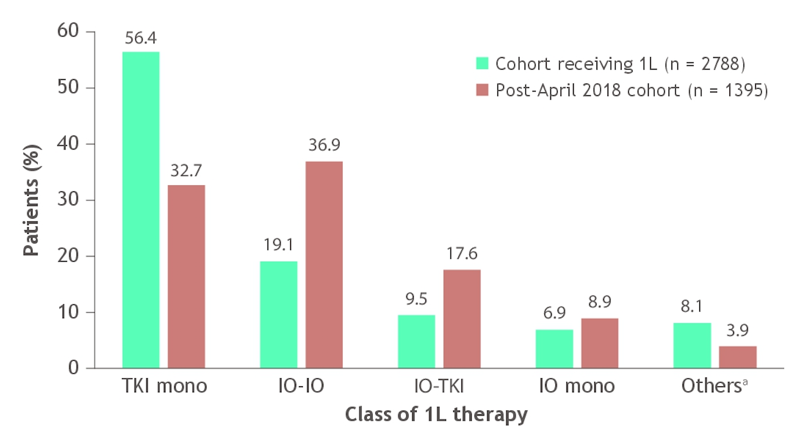 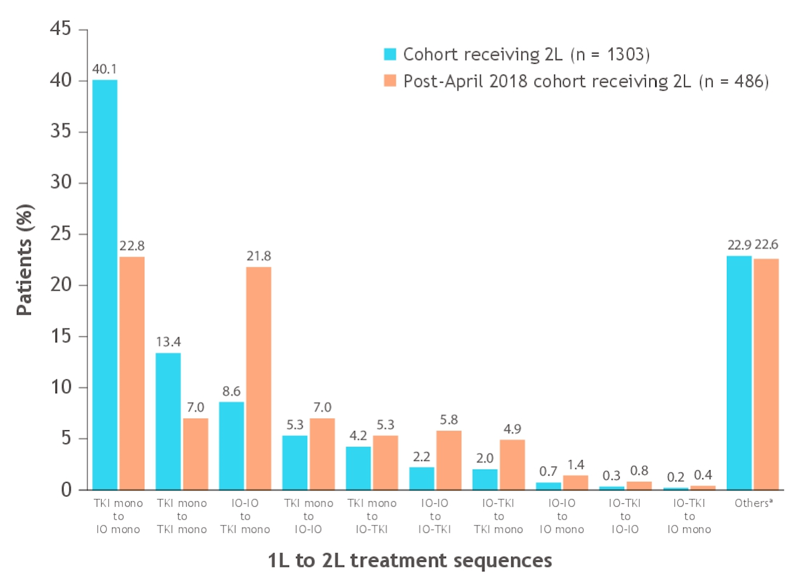 Dr. George concluded this presentation of real-world utilization practices for the treatment of mRCC with the following take-home messages: