Dr. Kaelin began by introducing the idea of genetic interdependence, based on the hypothesis that some mutations that our late in the development of a tumor (whether they be driver mutations or passengers) in tumors are only tolerated as the result of prior mutations that preceded them. If true, this would imply that targeting and correcting early mutations may selectively kill tumor cells. Based on this rationale, he suggested that this explains why targeted therapies to date have proven successful when aimed at the initiating truncal genomic events, highlighting examples such as Her2/Neu in breast cancer, EGFR and ALK in lung cancer, c-KIT in GIST, b-RAF in melanoma, BRCA1 in breast and ovarian cancer, and VHL (including both HIF and VEGF) in kidney cancer.

Dr. Kaelin emphasized that the natural experiment of VHL disease with germline heterozygosity shows evidence of the effect of the loss of the remaining wild-type VHL allele followed by mutations at other non-VHL loci.

These data therefore support the idea that inactivation of VHL is not, on its own, sufficient for renal carcinogenesis. However, it is a critical step in the process and acts as the initial event. Looking at sporadic renal cell carcinoma suggests that loss of VHL is the initiating event, followed by many other mutations, leading to renal carcinogenesis, even in patients without hereditary causes of disease. In terms of targeted therapy, Dr. Kaelin suggested that targeting of later mutations, which may occur in only a sub-population of the disease, would be expected to lead to worse responses compared to therapies which target mutations that occurred earlier in the progress of carcinogenesis which may affect all tumor cells.

Over time, work into the mechanism of the VHL protein led to the understanding that it functions in a ubiquitination complex which responds to oxygen selectively leading to activation of HIF and HIF-targeted genes. 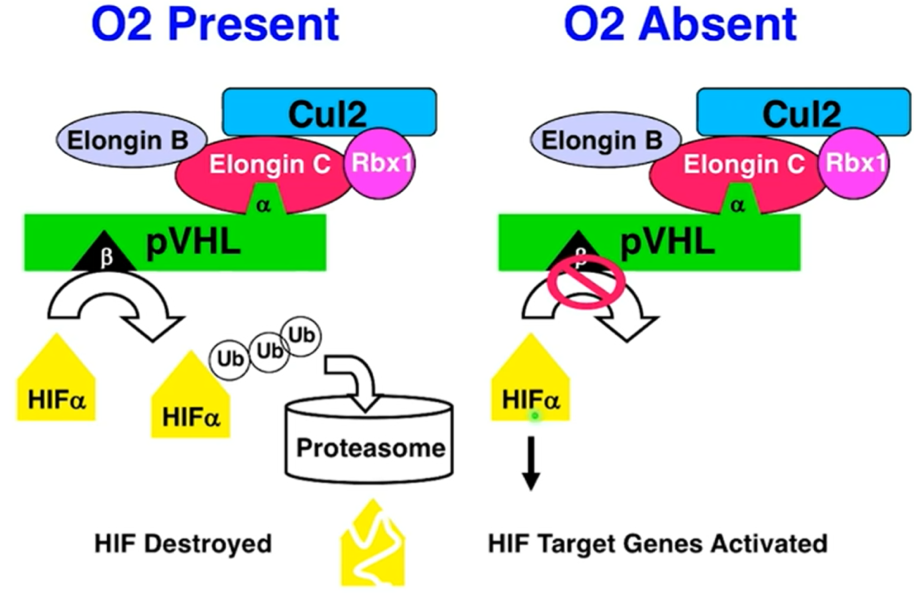 In terms of therapeutic targeting, it’s well known that HIF, though its function as a transcription factor, activations many cellular processes including glucose uptake, anaerobic glycolysis, angiogenesis, erythropoiesis, invasion and coming, and mitogenesis. In particular, angiogenic processes, including VEGF, was an emerging target in kidney cancer during that time. Currently, there are now seven approved VEGF inhibitors for the treatment of kidney cancer. While these are often efficacious, not all patients respond and most patients respond following therapy.

Based on first principles, Dr. Kaelin suggested that, instead of targeting a HIF effector gene, it may make more sense to target HIF itself. However, the conventional wisdom at the time was that HIF was not druggable. However, such a target was eventually identified which prevented HIF dimerization and DNA bindings.

These compounds were then developed further in a commercial setting. Such a HIF-2 antagonist was further developed and MK-6482 went into clinical trials, demonstrating that among heavily pre-treated patients, responses were not uncommon. Currently, phase III trials are ongoing. 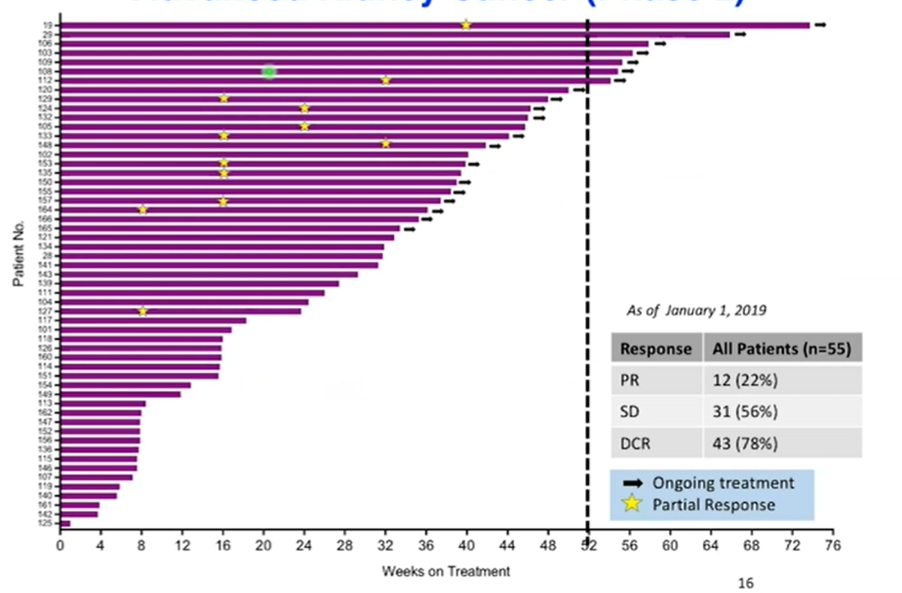 In a front-line setting, Dr. Kaelin then described a phase II trial of MK-6482 in patients with VHL-associated RCC on surveillance programs, demonstrating high rates of tumor shrinkage and a 12-month progression-free survival of 98.3%. Confirmed and unconfirmed partial responses were identified in 40%. Further, these patients had benefit in CNS, retinal, and pancreatic lesions.

In spite of these promising results, Dr. Kaelin returned to focus on the subset of patients who had poor responses, particularly after multiple lines of therapy. Dr. Kaelin then highlighted the potential for synthetic lethality. In the context of cancer, treatment should potentially focus on identifying gene targets for which mutation or loss of function was associated with synthetic lethality when combined with the known cancer gene. In this context, we should have a preferential effect only in cancer-gene mutation cells.

In the context of VLH-related ccRCC, Dr. Kaelin highlighted three gene targets (CDK8, MET, and MAP2K1) which appeared to have a synthetically lethal interaction with VHL such that their depletion led to cell death preferentially among those with VHL mutations. 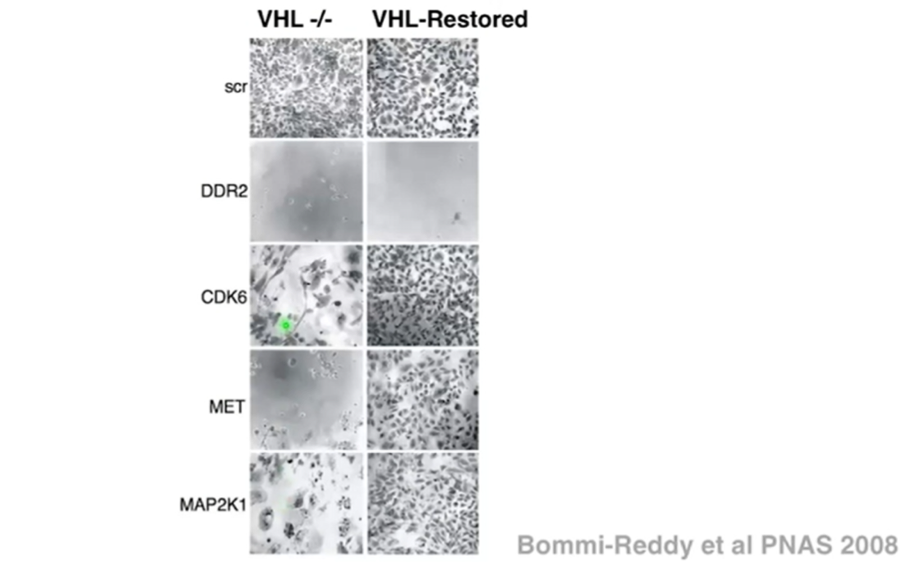 Further, it was known that there was cross-talk between HIF and MET, suggesting that dual VEGF/MET inhibition in kidney cancer may provide improved outcomes. Such a rationale supported the approval of cabozantinib in advanced kidney cancer. However, Dr. Kaelin emphasized that this is consistent with but not convincing for that utility of MET-inhibition.

To identify other synthetic lethal combinations, Dr. Kaelin described a series of experiments based on a CRISPR-based synthetic lethality screen with an inducible VHL gene. 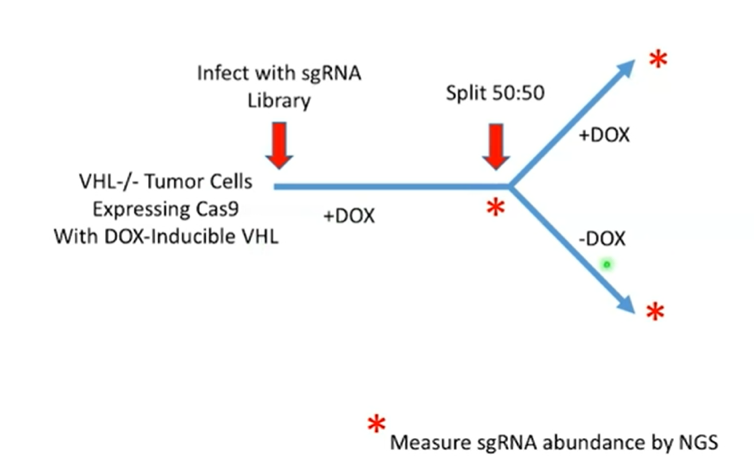 Complemented by other assays, this work identified a number of targets including CDK4/6 which was confirmed in this CRISPR-screen using human cell, in a chemical inhibition screen using human cells, and in RNAi models using Drosophila cells. Interestingly, this was HIF-independent. This was further assessed in in vivo models demonstrating that CDK 4/6 inhibition (using Palbociclib) prolongs surgical in VHL deficient, HIF-independent kidney cancer models. This was further tested in combination with HIF2 inhibitors, demonstrating a trend to an additive effect of the dual inhibition. To support this idea, a phase II trial is currently underway. 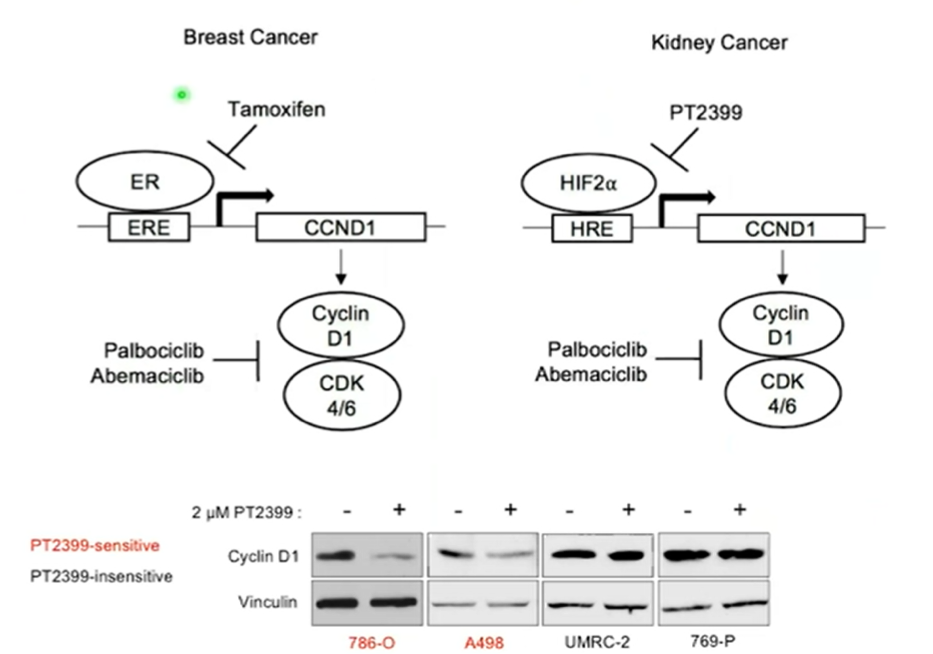 Notably, the observed synthetic lethality of CDK4/6 inhibition is not driven by HIF inhibition. Further, a number of studies have suggested that CDK4/6 inhibition may enhance the function of cancer immunotherapy by increasing the immunogenicity of tumors.

He highlighted data that, following allogenic stem cell transplantation to treat advanced RCC, a patient developed RCC-specific CD8+ T cells that recognized a peptide derived from hERV-E, a protein which is restricted to clear cell RCC and is not detectable in normal tissue or other tumors. Using this, other groups have shown that expression of endogenous retroviruses is associated with response to immune checkpoint blockade. hERV-E, in particular, is directly regulated by HIF2, explaining its upregulation in ccRCC. Since this time, there are many other endogenous retroviruses which are controlled by HIF2.

Thus, Dr. Kaelin concluded that, to cure kidney cancer, we will probably need to combine three or four drugs. Given the enormous number of cancer tumor cells, with even every low rates of resistance to any one drug, single agent treatment is almost certainly not going to be curative. However, the probability of any given cell being resistant to 3 non-cross resistant drugs is very low. This supports the rationale for combining drugs with distinct mechanisms of action. Using the model of R-CHOP used in lymphoma, this rationale was validated, demonstrating the efficacy was probably driven by a lack of cross-resistance.