San Francisco, California (UroToday.com) Dr. Nicola Fossati, MD, FEBU, Urologist at Vita-Salute San Raffaele University, presented some of the most influential articles from the past year in the field of prostate cancer research from a urology perspective. He focused on five areas: pre-operative setting, salvage radical prostatectomy, staging after biochemical recurrence, and quality of life. 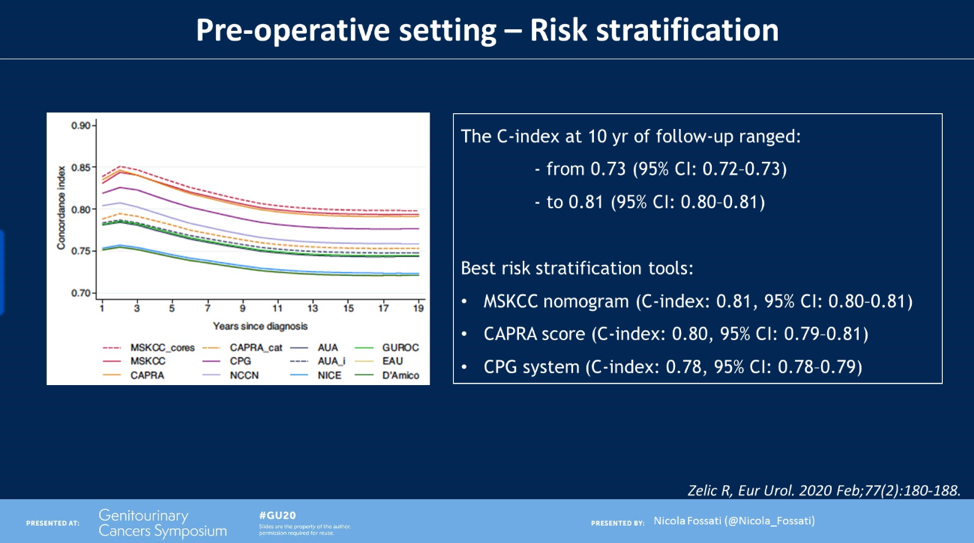 The second article focused on the impact of hospital caseload in the pre-operative setting.2 The aim of this study was to evaluate the association of faculty annual caseload with overall survival (OS) in 488,389 men. The strengths of this study are large patient numbers and events, though it is limited by the potential for selection bias given the retrospective nature of the study. Patients were grouped into four groups from the lowest to highest caseload and surgical caseload hospital at which they were treated. Compared to those in the highest caseload group, those in the lowest caseload group had significantly worse OS (hazard ratio [HR] = 1.30; OS benefit of 13 months). Similar results were observed for annual surgical caseload (HR = 1.25; OS benefit of 11 months). This research supports the regionalization of radical prostatectomy to high-volume centers.

Dr. Fossati then discussed a study that aimed to report outcomes from a large series of salvage radical prostatectomy (RP) after focal therapy.3 The study population was 82 patients who underwent RP after focal therapy (FT) between 2010 and 2018. Initial focal therapy included HIFU (70%), cryotherapy (19%), electroporation (5%), VTPT (4%), and PRX302 (2%). RP complication rates post-FT were similar to those observed with upfront RP. Pathology revealed in-field recurrence in 23%, out of field recurrence in 26%, and both in 51%. Progression-free survival rates following RP were 74% at 1 year, 48% at 2 years, and 36% at 3 years, worse than would be expected based on clinical characteristics. Urinary continence was 83% and erectile function was 14% at 12 months post-RP. The results are retrospective with a non-comparative design, however, it represents the largest series of patients treated with salvage RP after FT.

The next study discussed was a prospective, single-center, single-arm comparative study of 18F-fluciclovine PET/CT and 68Ga-PSMA-11-PET/CT in 50 patients with biochemical recurrence after RP with PSA levels ranging from 0.2 to 2.0.4 Median PSA was 0.48 with PSA doubling time of 4 months. Detection rates were significantly higher for PSMA PET than fluciclovine PET in the overall cohort as well as in the prostate bed, pelvic lymph nodes, extra-pelvic lymph nodes, bone, and other organs. Of note, there was no histologic correlation in this study. 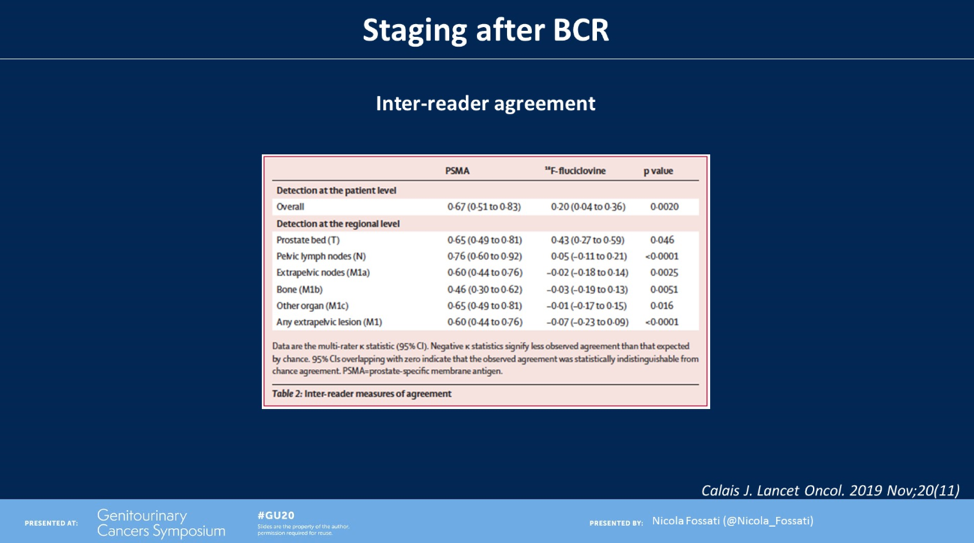