San Francisco, California (UroToday.com)  The first case presented was that of a 54-year-old otherwise healthy man who underwent radical prostatectomy after biopsy-confirmed prostate cancer. Pathology revealed a pT3b tumor, Gleason 4+3 = 7 with tertiary Gleason 5, pNx, negative surgical margins. The patient was lost to follow-up but then eventually returned and was found to have a PSA of 1.6 ng/mL, confirmed two weeks later at 1.8 ng/mL.

The first question raised was surrounding the next imaging step. Specifically, does the audience agree with the recommendation to pursue PSMA PET/CT imaging? A discussion of the benefits of PSMA-PET in this context ensued.

PSMA-PET has been shown to identify sites of disease in the context of biochemical recurrence at prostate-specific antigen (PSA) thresholds lower than conventional imaging, and the rate of PET positivity rises with PSA level. 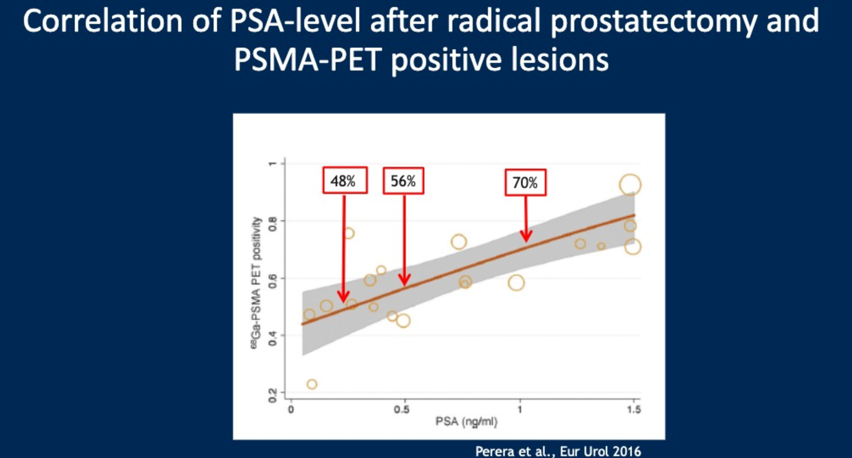 Positive findings on PSMA-PET have been shown in a recent meta-analysis to impact clinical management decisions.1 Specifically, as shown below, the initial therapeutic strategy was altered away from focal therapy towards more systemic therapy.

Returning to the case, a PSMA PET/CT was performed. It is important to note that this modality is currently not widely available in the USA, but this will likely change in the near future. The scan revealed four PSMA-avid perirectal and iliacal lesions. The next question raised was for next treatment steps: surveillance vs salvage lymph node dissection, salvage radiation, or androgen deprivation therapy (ADT) monotherapy.

Most audience members voted for salvage radiation. A discussion of each of the presented options ensued.

Regarding salvage lymph node dissection, there is no randomized control trial data to support this, though one has been recently opened in Sweden.

There is one study that retrospectively examined salvage lymphadenectomy across multiple centers using PET-directed patient selection. This is summarized here: 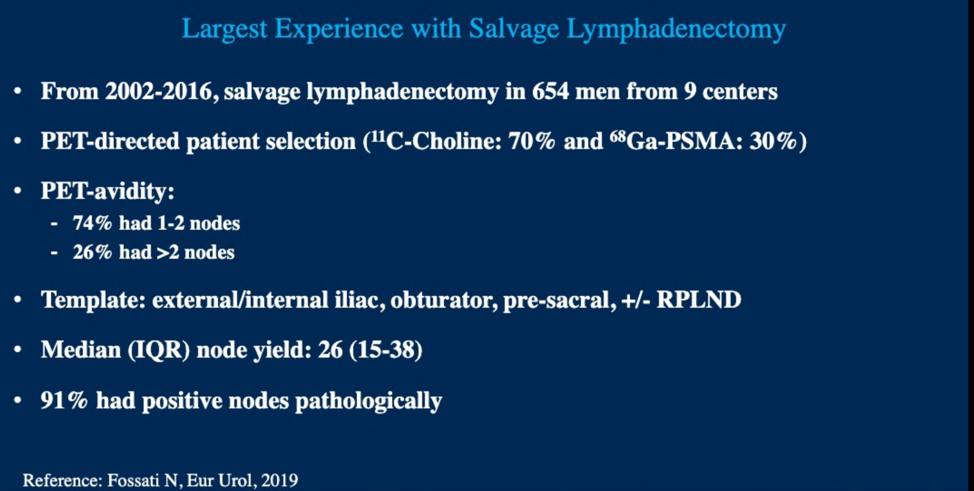 Ultimately, it is not clear that salvage lymphadenectomy, even based on PET/CT imaging, is an effective intervention. Dr. Eggener said that the only patients he might consider salvage lymphadenectomy in are those that might be low risk for further metastatic disease (favorable Gleason score, etc) in whom the surgery is technically feasible.

A discussion of the role of radiation in the setting of nodally recurrent prostate cancer then was held. The evidence for this comes in part from the STOMP trial showing tolerability, improvement in biochemical recurrence-free and ADT-free survival.2 What is the best way to deliver radiation? Elective radiation to nodal basins (ENRT) versus SBRT was discussed with the following summary: 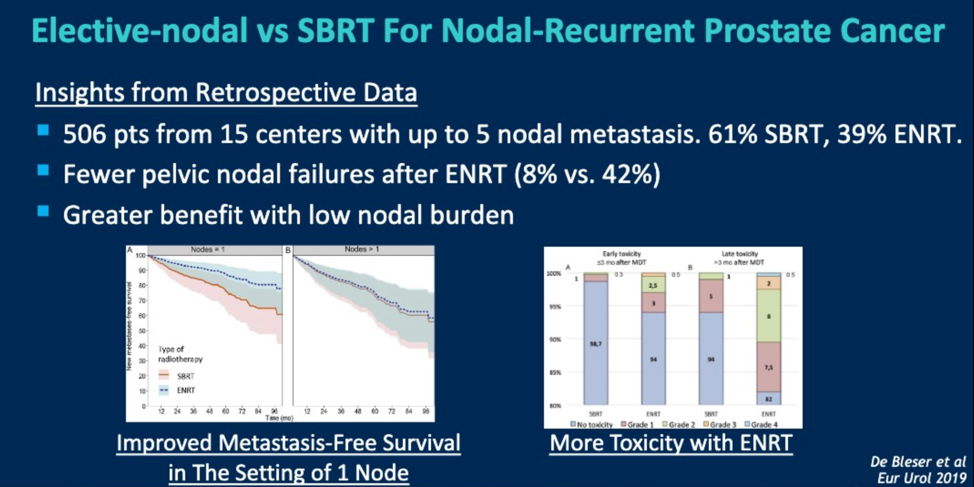 Ultimately Karen Hoffman, a radiation oncologist, discussed how she would recommend ENRT as well as prostatic fossa radiation with a higher dose delivered to areas of gross disease. She would also recommend one to two years of ADT, extrapolating from the known benefit of adding ADT to radiation in high-risk localized patients. Given the patient’s relatively low PSA level, the discussant described that it would be important to ensure the PSA was appropriately trending downwards while on ADT. Though the patient is quite young, the risk of secondary malignancy does not outweigh the need for disease control in this case.

Finally, a discussion of PSMA-PET was held in more detail. As alluded to above, PSMA-PET is effective and changes therapeutic decision making (without evidence supporting the long-term efficacy of these therapeutic changes). Importantly, compared to other PET/CT modalities such as fluciclovine, PSMA-PET appears to have higher detection rates and better inter-reader concordance rates. 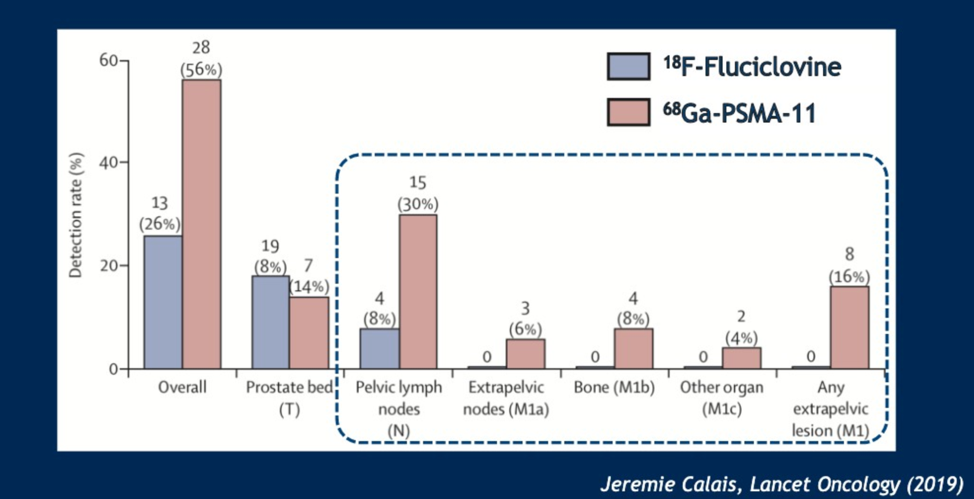