San Francisco, California (UroToday.com) As part of the Prostate Cancer Session at the 2020 American Society of Clinical Oncology Genitourinary Cancers Symposium (ASCO GU) Alicia Morgans provided an overview of key prostate cancer studies published over the last year from a medical oncology perspective. She divided these papers into new standards of care for men with mCSPC and treatment selection in mCRPC.

The TITAN study was a Phase III, double-blind, randomized study designed to determine whether apalutamide, a selective next-generation androgen receptor inhibitor, plus androgen deprivation therapy (ADT) improves radiographic progression-free survival (rPFS) and OS compared with placebo plus ADT in men with metastatic castration-sensitive prostate cancer (mCSPC).2 Dual primary endpoints were rPFS and OS. Secondary endpoints were time to (i) initiation of cytotoxic chemotherapy, (ii) pain progression, (iii) chronic opioid use, and (iv) skeletal-related event. Patients were randomized 1:1 to apalutamide (240 mg/d) or placebo, added to ADT, in 28-day cycles. There were 525 patients randomized to apalutamide and 527 to placebo. The median age was 68 years, 8% had prior treatment for localized disease, and 11% had prior docetaxel. With regard to disease burden, 63% had high-volume disease and 37% had low-volume disease. At a median follow-up of 22.6 months, 66% of patients on apalutamide and 46% of patients receiving placebo remained on treatment. Apalutamide significantly improved rPFS (HR 0.48, 95% CI 0.39-0.60), with a 52% reduction in risk of death or radiographic progression. Importantly, this benefit was observed across all subgroups analyzed. Median rPFS was not reached in the apalutamide group and was 22.1 months in the placebo group. Second, apalutamide significantly improved OS (HR 0.67, 95% CI 0.51-0.89), with a 33% reduction in the risk of death. Median OS was not reached in the apalutamide or placebo group. As of now, Dr. Morgans notes that we now have four category 1 options for systemic treatment for mCSPC. 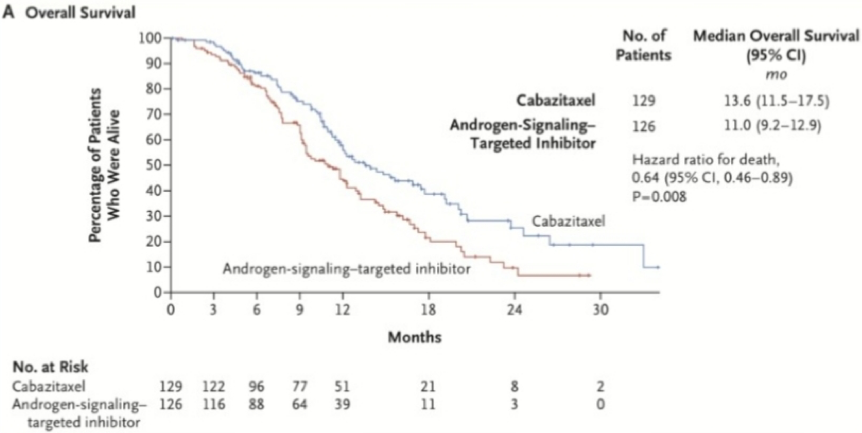 Dr. Morgans notes that in general sequencing AR agents is poorly effective: 14% of patients had a >=50% PSA response to second AR targeted agent and median PFS was 2.7 month for the second AR agent.