San Francisco, CA (UroToday.com) The treatment landscape for metastatic hormone-sensitive prostate cancer (mHSPC) has changed significantly over the last several years, with the addition of abiraterone acetate and enzalutamide as FDA-approved non-chemotherapy alternatives among others. When added to standard androgen-deprivation therapy (ADT), the principle of “androgen annihilation” has become a standard of care.  Apalutamide represents an alternative agent for the direct blockade of androgen receptor signaling, similar to the mechanism of enzalutamide. As initially presented last year at the 2019 ASCO Annual Meeting and published in the New England Journal of Medicine, apalutamide provided enhanced overall survival (OS) and radiographic progression-free survival (rPFS)1,2.  This study led to the FDA approval of apalutamide for mCSPC. Here Dr. Neeraj Agarwal presented data on the first subsequent therapy after progression on apalutamide.

To review, the TITAN trial was a phase III, randomized double-blind study of the addition to ADT of apalutamide versus placebo in patients with mCSPC which met both primary endpoints (OS and rPFS) including in patients with high or low volume disease. Dr. Agarwal et al. describe a post hoc analysis to evaluate whether the use of apalutamide in the metastatic hormone-sensitive setting would provide a PFS advantage irrespective of whether hormonal or taxane-based therapy was used at the time of progression to castration resistance. The authors define PFS2 as the time from randomization to first occurrence of investigator-determined disease progression while the patient was receiving first-line therapy. 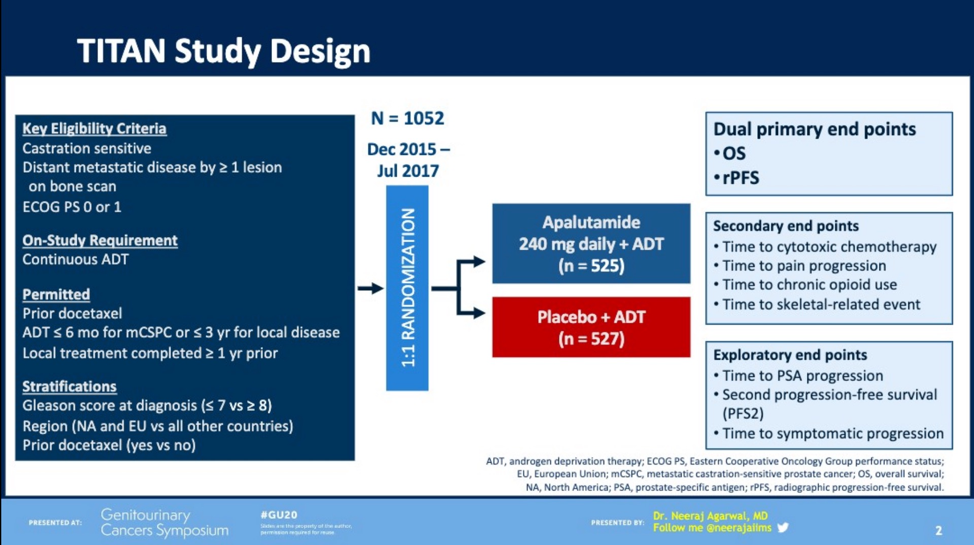 At the time of analysis, 277 TITAN patients had received systemic therapy for their prostate cancer, 87 of whom had received apalutamide initially. Of these, 86 received further hormonal therapy, including 24 subjects who were switched from apalutamide to abiraterone acetate or enzalutamide. 99 subjects received taxane (either docetaxel or cabazitaxel, 30 from the apalutamide group, 69 from the placebo group).  The median duration of treatment with first-line therapy was similar across all groups. Irrespective of the therapy administered for castration-resistance, the progression-free survival (PFS2) was significantly longer for those patients receiving apalutamide versus placebo in the first line (HR 0.66, 95% CI 0.50-0.87, p = 0.0026). 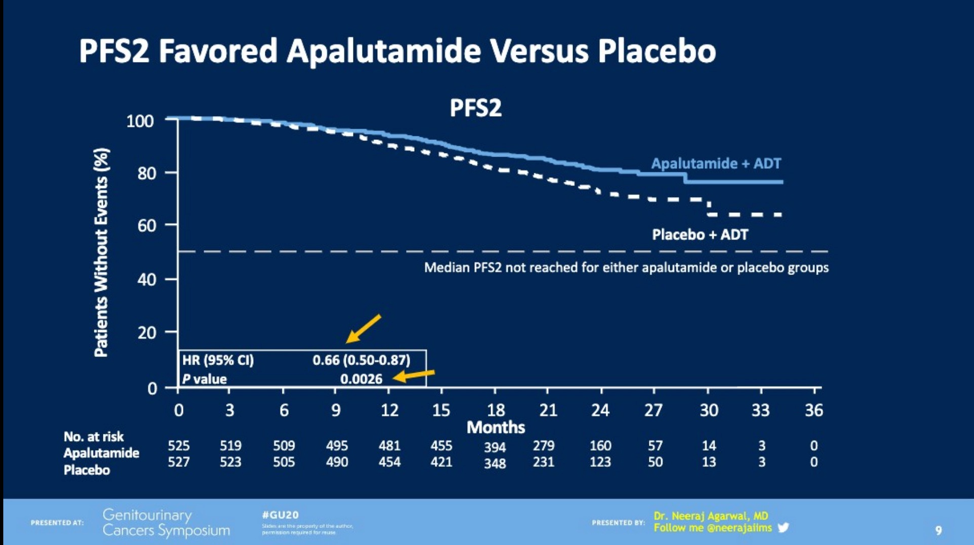 Both patients receiving hormonal therapy or taxane demonstrated a significantly reduced risk of a second progression that had received prior apalutamide (hormonal: HR 0.68 [0.48-0.97], p = 0.0326; taxane: HR 0.67 [0.48-0.94], p = 0.0189). All patients had discontinued therapy at the time of analysis, most of whom did due to the progression of the disease. Of note, those patients receiving taxane had a higher proportion of patients with either high volume disease or greater than 10 bony sites of metastasis.  This group also was less likely to have had prior docetaxel.  The authors highlight the limitations of post hoc analysis and that the selection of subsequent therapy was not randomized, which precludes these data from championing a “best” subsequent therapy. 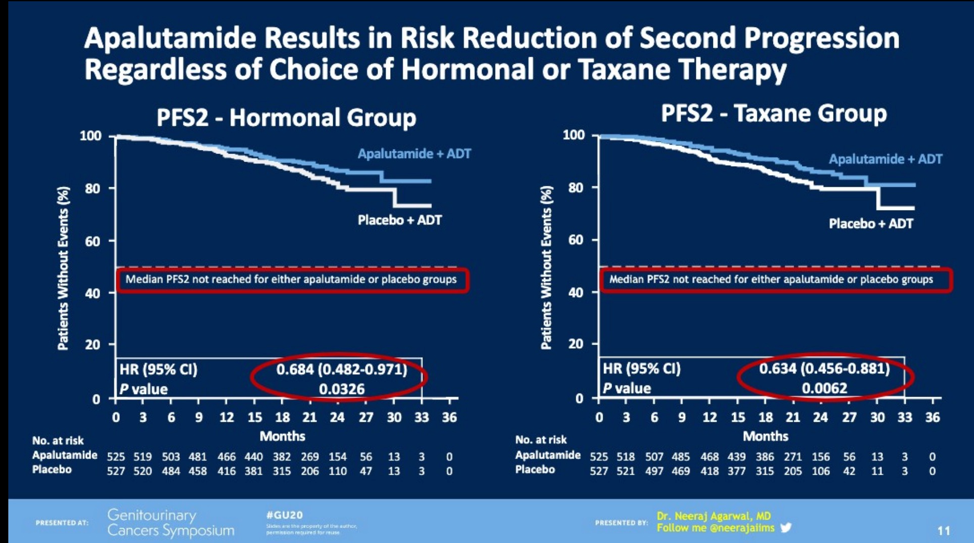 These results may reduce clinician concern that using non-ADT hormonal therapies in castration sensitive disease reduces advantageous options in the future. The results may also help clarify, although incompletely, some uncertainty about the sequencing of prostate-cancer directed therapies and whether an upfront advantage in PFS1 with “androgen annihilation” in mCSPC would be maintained with the eventual addition of non-ADT AR targeted therapies. Dr. Agarwal closed by suggesting that these data do require additional time for maturity, but “may assist in counseling a patient with CSPC” who may be faced with several varying treatment options.