San Francisco, CA (UroToday.com) Pembrolizumab is an anti-PD-L1 antibody that has demonstrated antitumor activity and a manageable profile of adverse events across many solid tumors. KEYNOTE-199 is a multicohort phase II study of men with metastatic castration-resistant prostate cancer (mCRPC) who have previously progressed after docetaxel and at least one hormonal therapy1. Published results from cohorts 1-3 demonstrated modest overall response rates (ORR, 5% in PD-L1 positive and 3% in PD-L1 negative, via RECIST), but durable responses in those patients sensitive to pembrolizumab2.

Dr. Julie Graff presents data from the remaining two cohorts (Cohort 4, C4; Cohort 5, C5). Notably, cohorts 1-3 received pembrolizumab monotherapy.  In contrast, C4 and C5 had pembrolizumab added to enzalutamide, as combination therapy. Prior single-institution experiences in a phase II study (n = 28) demonstrated favorable efficacy with the addition of pembrolizumab to enzalutamide after progression on enzalutamide, lending clinical support for combination therapy3.  All subjects in cohorts 4 and 5 had previously responded to enzalutamide but with subsequent progression. PD-L1 status was mixed and reported in the authors’ Table 1.  Patients were enrolled irrespective of prior abiraterone exposure.  All patients had ECOG PS of 0-2 and were chemotherapy-naïve. 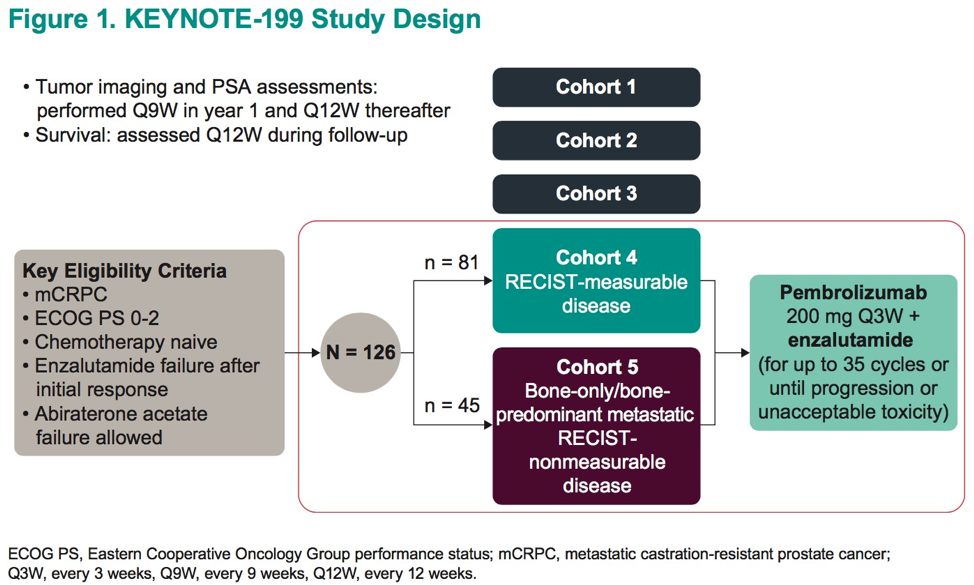 C4 (n = 81) subjects were men with measurable disease and C5 (n = 45) had bone-predominant disease. All patients received pembrolizumab at flat dosing (200 mg q3w) in addition to continuation of enzalutamide for up to 35 cycles or until either disease progression or intolerable toxicity. 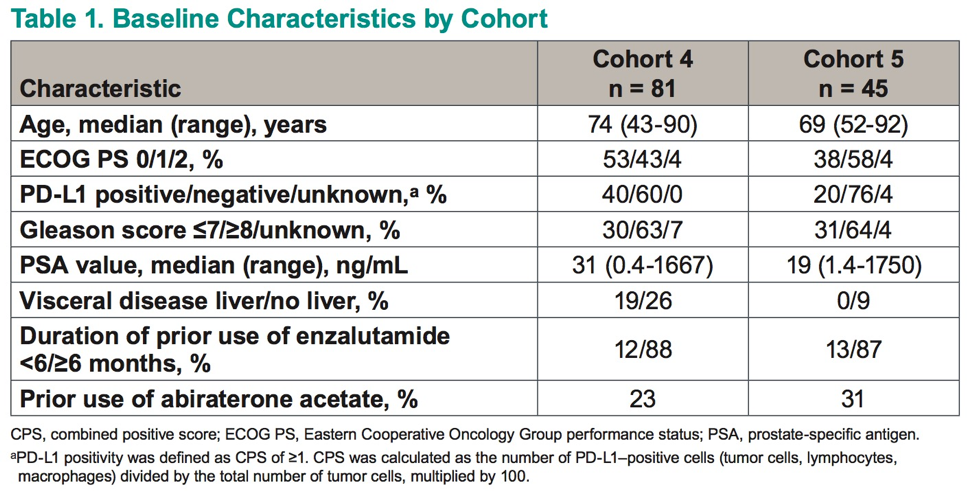 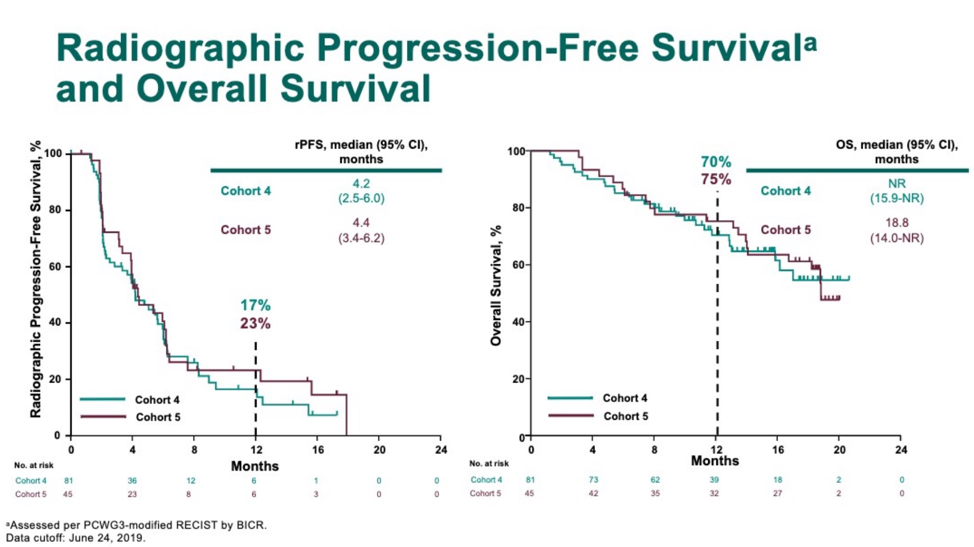 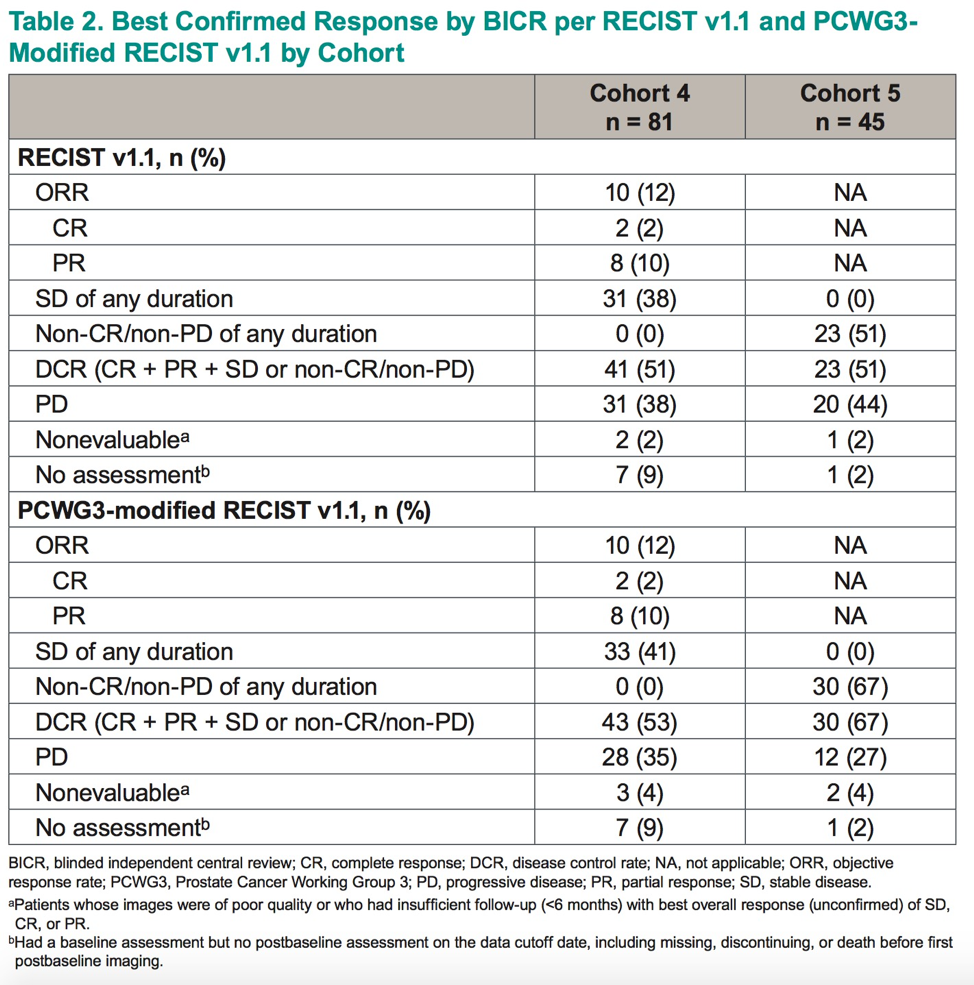 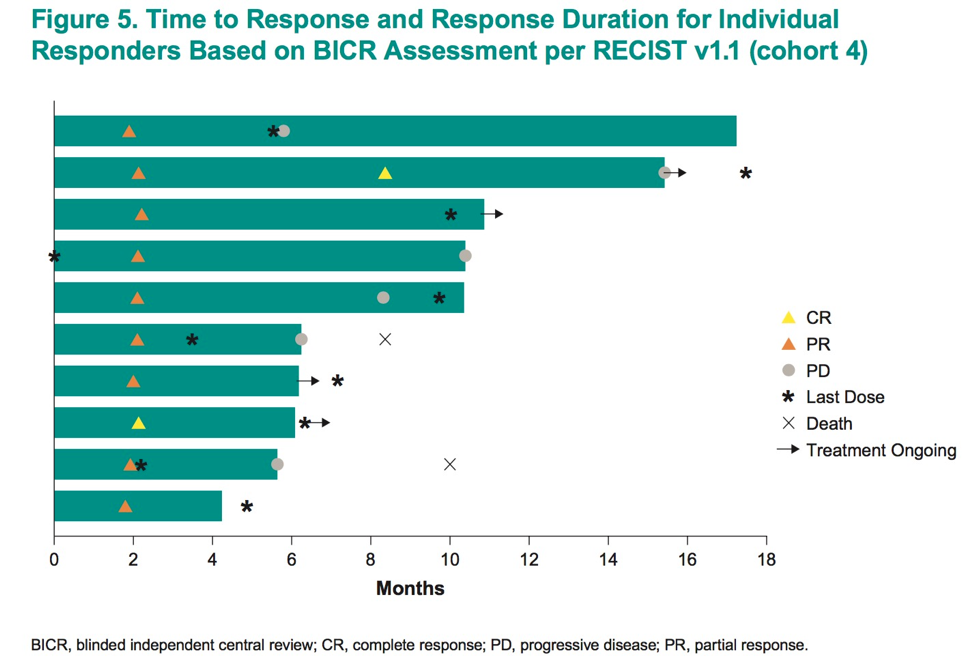 With regard to safety, All Grade (C4 75%, C5 69%) and Grade 3-5 (C4 26%, C5 24%) adverse events (AEs) were similar as compared to cohorts 1-3 but numerically more frequent. The authors note that rash was more commonly experienced by subjects than has been previously reported for either agent alone.  Whether this reflects the intrinsic additive likelihood of experiencing an AE from two separate drugs simultaneously or some interaction of the two mechanisms is unknown.

These data demonstrate clinical support for the preclinical rationale for the addition of the androgen receptor inhibitor enzalutamide to immune checkpoint blockade with pembrolizumab. Again, as in prior cohorts of KEYNOTE-199 and in other disease types, responses are in a minority of patients, but many responding patients experience a durable response. It is anticipated that use of additional clinical, pathological, or genomic parameters could help identify those patients most likely to respond to pembrolizumab.  The combination of enzalutamide to pembrolizumab appears to demonstrate higher ORR in those patients with measurable disease as compared to pembrolizumab alone (Cohorts 1-2), supporting the ongoing phase III clinical trial of this combination in enzalutamide-naïve patients (KEYNOTE-641, NCT03834493)4.