San Francisco, CA (UroToday.com) As a part of the session assessing “Targeted Therapy in the Context of Low-Volume Metastatic Prostate Cancer” the question was repeatedly raised of how metastasis-directed therapy (MDT) can impact overall survival. The common standard of treatment for men with biochemical recurrence after radical prostatectomy and/or radiotherapy is immediate or delayed androgen deprivation therapy (ADT). The initiation of ADT marks the beginning of castration-sensitive disease and foreshadows the eventual development of castration-resistance. Prior retrospective data supported the principle that focal MDT for oligometastatic disease (three or fewer sites of disease) could delay both further disease progression and initiation of ADT. The STOMP trial was a multicenter, randomized phase II trial that prospectively evaluated the effects of MDT for oligometastatic disease. The results previously demonstrated longer period to ADT initiation with MDT.1 Here the authors present updated results at 5 years of the previously published trial.

In STOMP (NCT01558427) patients with asymptomatic prostate cancer with biochemical recurrence following treatment with curative intent were eligible if testosterone was >50 ng/mL and a choline PET-CT revealed as many as 3 extracranial sites of disease. Randomization balanced the PSA doubling time (PSA ≤ 3 months v >3 months) and presence of nodal/non-nodal metastases. Patients were randomized 1:1 and MDT was either SBRT or metastasectomy. The primary endpoint was time to initiation of ADT (called ADT-free survival). ADT was initiated for symptoms, progression beyond 3 metastases, or local progression of known metastatic disease. Time to castration resistance was a secondary endpoint (called CRPC-free survival).

Dr. Piet Ost’s presentation began by him highlighting that, when designing the study nearly 10 years ago, the EAU maintained a dual-standard of care for asymptomatic patients, either immediate or delayed ADT under observation.  This informed their comparison of MDT versus observation. Dr. Ost presented updated data revealing a 5-year ADT-free survival of 8% in patients under surveillance alone and 34% for the MDT group, with a HR of 0.57 (80% CI: 0.38-0.84, log-rank p = 0.06). No differences were seen between groups when stratified by nodal versus non-nodal metastases. Secondary endpoint of CRPC-free survival at 5 years was 53% in subjects under surveillance and 76% in those receiving MDT (HR 0.62, 80% CI: 0.35-1.09). 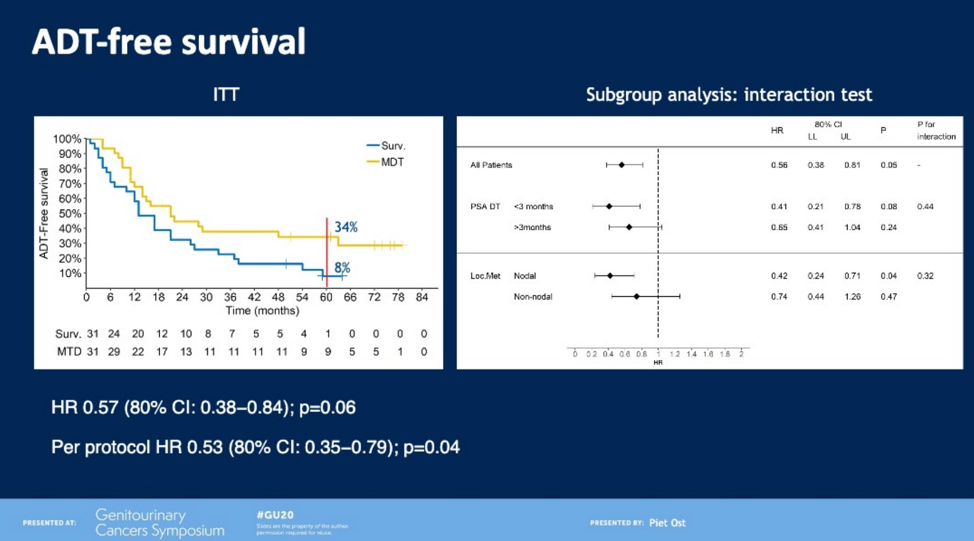 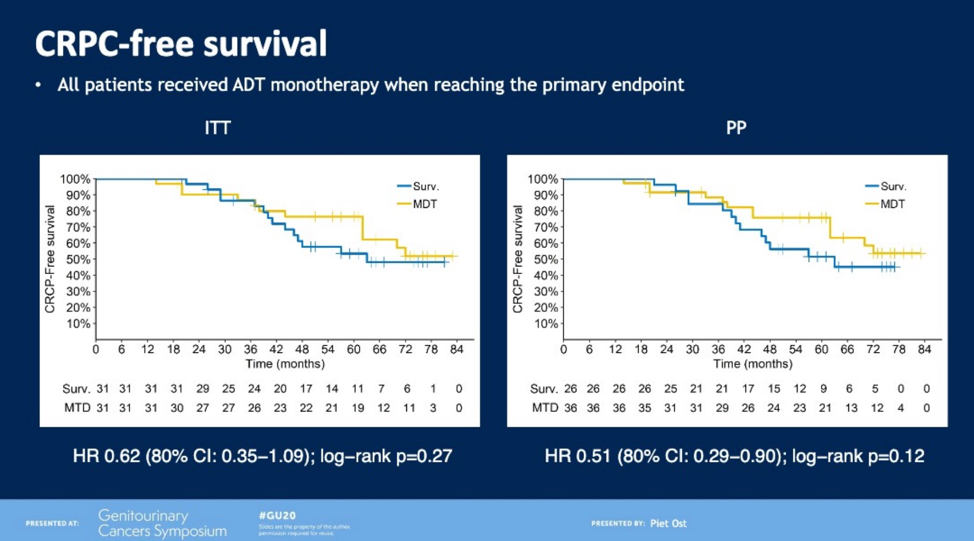 With a median follow up for survival of 5.3 years (IQR 4.3-6.3), 5-year overall survival was 85%. The authors note 6 of the 14 deaths were attributed to prostate cancer. This underscores that prostate cancer-specific mortality is low from oligometastatic disease within the first 5 years, and leaves the impact on overall survival open to question. Naturally, it stands to reason that delaying the initiation of ADT and eventual development of CRPC may positively impact disease-specific overall survival, however, Dr. Ost notes that an appropriately powered phase III study would require significantly large numbers of subjects and at least 10 years of follow up. He also cautions the participants to note that the phase II study presented here was a phase II screening trial with alpha and beta both set at 0.20, meaning that the results should “not change practice” but to inform possible phase III studies. 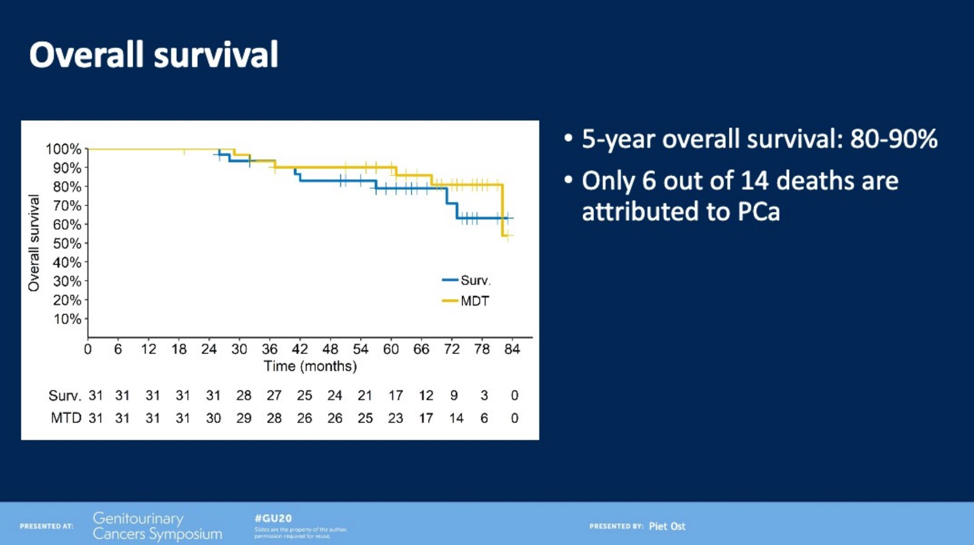 It is reassuring to see the initial results reported two years ago remain significant at longer follow up, and makes the argument for considering MDT in select patients.  As approaches for MDT are advanced, it will likely remain a decision made between individual patients and their oncologists, balancing priorities, toxicities, including those incumbent with ADT, and careful patient selection. As has been proffered before, the experimental group had only 4 patients with a Gleason score of 6 or less, as compared to the surveillance group (n = 10), indicating that the MDT group having perhaps more aggressive disease. This may have reduced the potential difference between surveillance and MDT. As next-generation imaging techniques (e.g. flucicolvine-based and PSMA-based PET) become more readily available, patients with the ability to identify true oligometastatic disease should become more accurate.

Dr. Ost closed by raising open questions about how the aforementioned techniques influence definition of oligometastatic disease, what our ideal endpoints should be, and implored the audience to “stop treating patients outside trials if you have access to trials,” particularly randomized trials.