San Francisco, California (UroToday.com) As nuclear imaging techniques become more and more sensitive, our ability to detect oligometastatic disease after definitive treatment of localized prostate cancer is increasing, especially with PSMA PET. Recent studies have shown that PSMA PET can now detect recurrent disease in up to 38% of patients with a PSA <0.5 ng/mL, and 97% in patients with a PSA >5 ng/mL.1 However, it is unknown if early metastases driven therapy improves overall survival.

STOMP is a prospective randomized multicenter phase II study that enrolled patients with biochemical recurrence after primary prostate cancer treatment with curative intent.2 Patients had 3 or fewer extra-cranial metastases by choline PET and serum testosterone greater than 50 ng/mL. Patients were randomized to either surveillance or metastasis directed therapy (MDT) (surgery or radiation). In the surveillance cohort, ADT was initiated when there was symptomatic progression, progression to more than 3 metastases, or local progression of known metastases. 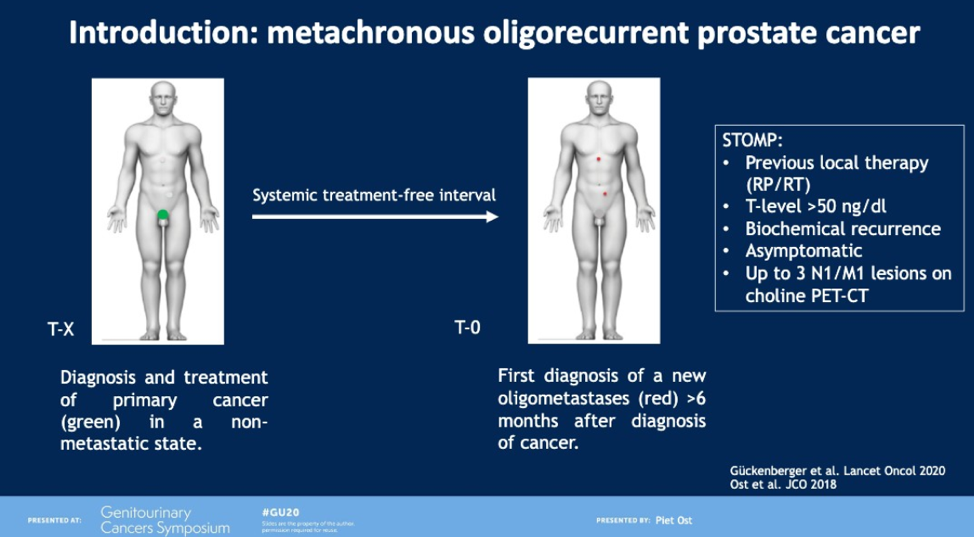 The initial data published in 2017 demonstrated a significantly longer ADT-free survival period for patients receiving MDT compared to patients on surveillance. At the initial median follow up of 3 years, the median ADT-free survival was 13 months (80% CI, 12 to 17 months) for the surveillance group and 21 months (80% CI, 14 to 29 months) for the MDT group. There was no difference in the quality of life for both cohorts. Another small phase II study, ORIOLE (Observation versus stereotactic ablative radiation for oligometastatic prostate cancer, n=54) randomly assigned patients with recurrent, hormone-sensitive, oligometastatic prostate cancer to observation and no further treatment for six months or to SBRT.3 Progression at 6 months was observed in 19% of patients in the SBRT arm and 61% of patients in the observation arm, and median PFS had not yet been observed at the time of data cutoff in the SBRT arm, compared with 5.8 months in men on observation.

As expected, the 5 year overall survival for patients was high at 85%, with only 6 out of the 14 deaths attributed to prostate cancer.

This study demonstrates that metastases directed therapy are not only safe but also effective in delaying ADT therapy for men with oligometastatic prostate cancer. This has important quality of life implications. Of note, this trial was not powered for overall survival. This trial, as Dr. Ost notes is not designed to change practice but rather suggests what to do for future phase III studies, and provides data that future studies would need 10 year follow up to evaluate overall survival.