San Francisco, CA (UroToday.com) To conclude the session on treatment selection for localize renal tumors at GU ASCO 2020, Dr. David Liu, PhD, from the University of British Columbia discussed percutaneous ablation as a nonsurgical treatment option for patients with renal cell carcinoma (RCC). Dr. Liu notes that thermal ablative strategies have been used for nearly 25 years, dating back to in vivo experiments in the mid-90’s for radiofrequency tumor ablation lead by Professor Alexandre Zlotta. Since then, there have been evolving indications:

A systematic review and meta-analysis published in 2016 summarized the comparative effectiveness among patients undergoing active surveillance, thermal ablation, radical nephrectomy or partial nephrectomy.1 Among 107 studies identified, the majority assessed T1 tumors, as no active surveillance or thermal ablation stratified outcomes of T2 tumors. Cancer specific survival was excellent among all management strategies with a median 5-year survival 95% for all modalities. Local recurrence-free survival was inferior for thermal ablation with one treatment but reached equivalence to other modalities after multiple treatments. Overall survival rates were similar among management strategies and varied with age and comorbidity. End-stage renal disease rates were low for all strategies (0.4%-2.8%), however radical nephrectomy was associated with the largest decrease in eGFR rate and highest incidence of chronic kidney disease. Thermal ablation offered the most favorable perioperative outcomes, whereas partial nephrectomy showed the highest rates of urological complications. but overall rates of minor/major complications were similar among interventions.

The society position statements are quite clear that thermal ablative therapies are an option for patients with small renal masses. The NCCN guidelines ablative techniques should be offered as a primary treatment in their updated 2020 guidelines. Specifically, NCCN says that thermal ablation is an option for masses ≤ 3cm, but may also be an option for larger masses in select patients. The ASCO guidelines suggest that percutaneous thermal ablation should be considered an option for patients who possess tumors such that compete will be achieved. Furthermore, ASCO recommends that a biopsy should be performed before or at the time of the ablation. Finally, the AUA notes that physicians should consider thermal ablation as an alternative approach for the management of cT1a renal masses <3 cm in size; a percutaneous technique is preferred over a surgical approach whenever feasible.

Regarding patient selection, there are several metrics available for scoring tumor complexity, including the PADUA score, and the RENAL nephrometry. The lesions that are considered challenging for ablation include those that are: too big (>3 cm), too many (> 3), too peripheral, not well-defined, too central, and are recurrent/failed. The following figure illustrates several important nuances for ablative therapy:3 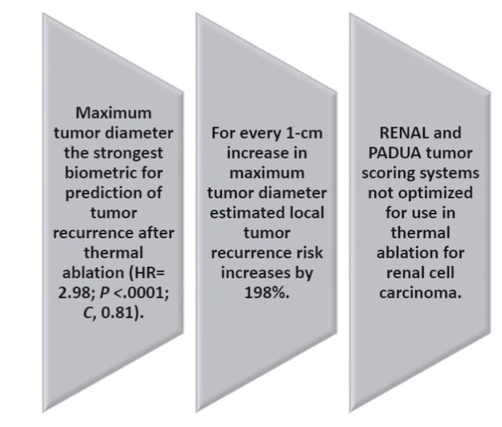 According to Dr. Liu, there are no clear prognosticators relating to RCC subtype and ablation, and there is no significant alteration of renal function post-ablation. The main prognosticator of failure/recurrence is size of the lesion, and adjacent cortical structures may effect technical ability and complication rates.

Dr. Liu concluded with several take-home points from his presentation of ablative therapies for RCC: