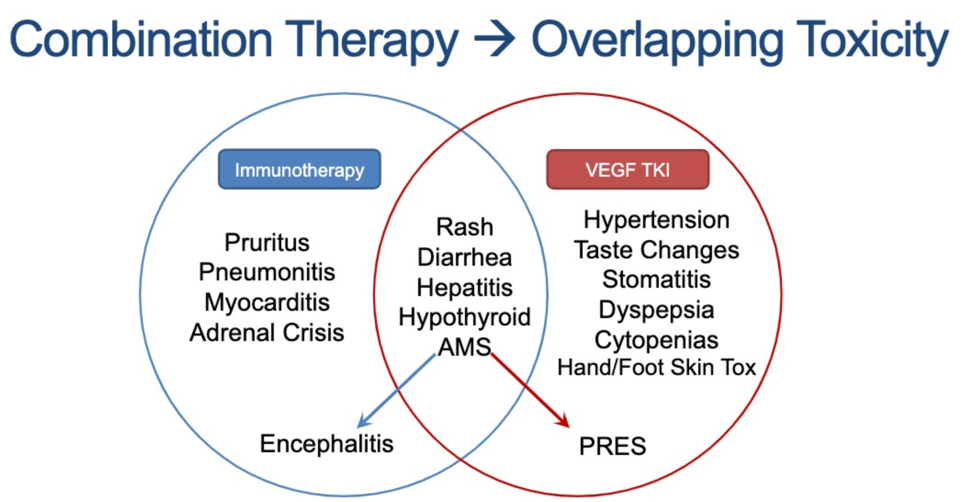 These classes of side effects have different onset and treatment characteristics. Immune related adverse events may never occur, are independent of treatment dose, can emerge anytime, and need treatment to resolve. VEGF TKI toxicity is almost guaranteed, is dependent on dose, but typically present by 3-4 weeks of treatment and resolve withholding the drug. 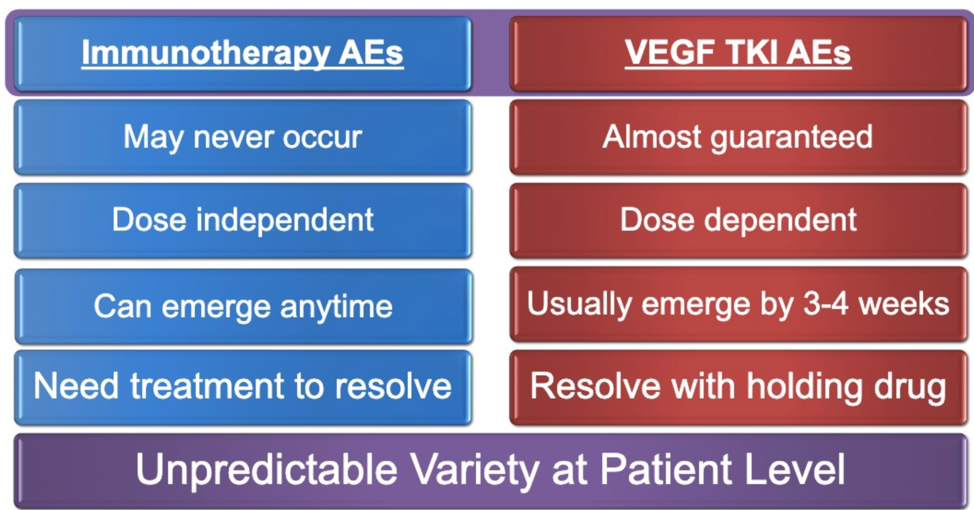 Dr. Elizabeth Plimack then presented three cases that show variable clinical courses in metastatic renal cell carcinoma, different management approaches, and various side effects and how she managed them.

The first case is that of a 24-year-old woman who was diagnosed many years ago with metastatic RCC. She was put on trial with ipilimumab and nivolumab but unfortunately developed colitis after the first dose. Her therapy was discontinued, and she was started on steroids that were tapered slowly after rapid reduction to 20 mg daily. She did have some clinical response, with a resolution in her lung metastatic disease, but she did show a slight progression of her abdominal metastatic disease. Amongst the options available at that time, a careful nivolumab re-challenge was started. The patient did not get colitis but developed other immune related adverse events (irAE) with adrenal insufficiency, hypothyroidism, and severe infusion reactions. The patient went on to receive multiple TKI therapies and was able to live for a total of eight years after diagnosis, but unfortunately passed away at age 31.

Dr. Plimack made several key points about this case. First, it is important to realize that patients on immunotherapy studies with severe adverse events are taken off study and do not fill out subsequent quality of life surveys on protocol. This is important to note in the context of comparing patient-reported outcomes for immunotherapy versus TKI therapy. Second, immune-related adverse events are very common for first line ipilimumab and nivolumab combination therapy, with at least 35% of patients requiring high dose steroids. Prompt recognition is critical. If you can, it is helpful to confirm the diagnosis, but this is not required before starting high dose steroids. Dr. Plimack’s practice is to taper steroids down to 20 mg relatively rapidly, then start a slower taper. Do not forget GI and PCP propylaxis at steroid doses higher than 20 mg daily. If the adverse event is not life threatening or does not fit into one of the profiles discussed below, a re-challenge can be considered though it may be preferable to use other immunotherapy agents if possible.

The second presented case was that of a 74-year-old woman who was diagnosed with metastatic clear cell renal cell carcinoma over twenty years after undergoing nephrectomy for stage II disease. She was found to have metastatic disease to the body and tail of the pancreas on a scan done for other reasons. Her IMDC risk was favorable. Given her age and performance status, Dr. Plimack elected for an intermediate treatment approach with pazopanib 800 mg daily. Of the potential “dartboard” of possible side effects, this patient developed fatigue and diarrhea. 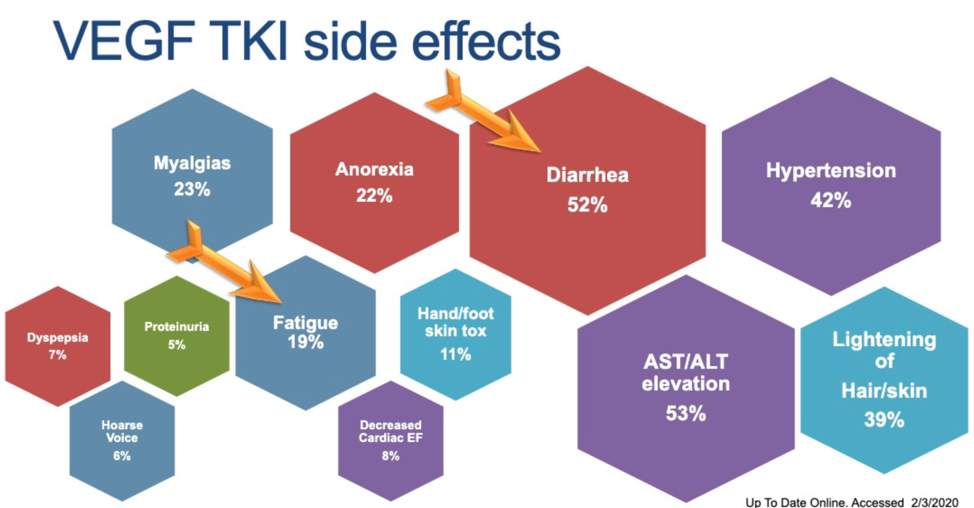 Dr. Plimack held the drug, managed diarrhea with pazopanib, and once the patient’s fatigue improved she restarted the pazopanib at a lower dose of 400 mg daily. At 12 weeks the patient’s pancreatic lesions had regressed, but she, unfortunately, suffered a seizure that was attributed to posterior reversible encephalopathy syndrome. This is a rare side effect of anti-VEGF therapy that typically occurs early in therapy. This was managed by blood pressure management, anti-convulsants, pazopanib permanent discontinuation, and close monitoring. Symptoms resolved within a few days. The patient was subsequently observed, and seven years later had no recurrence of the disease.

Using this case, Dr. Plimack discussed the principles of VEGF TKI side effect management. She encourages her patients to call early for support as many of the common side effects can be managed such as hypertension, skin toxicity, and diarrhea. Supportive management is less effective for anorexia, fatigue, hypopigmentation and voice hoarseness. Dr. Plimack has a low threshold to hold the drug and then once the patient has improved, restarting at a lower dose. Some drugs like pazopanib have very informative package inserts for strategies for holding and restarting drugs. It may be advisable to dry dose/schedule adjustment in order to maximize clinical benefit time on an otherwise effective therapy

The third case was that of a 54-year-old man who was diagnosed with metastatic IMDC intermediate risk clear cell renal carcinoma either years after undergoing right partial nephrectomy for pT3aN0M0 clear cell cancer and declined adjuvant therapy. He was started on axitinib and pembrolizumab. He initially developed hypertension for which his axitinib was held, his antihypertensives were maximized, and his axitinib was resumed at a lower dose. He then developed nausea and vomiting during cycle 5. He held his axitinib and presented for evaluation three days later, feeling better by that time. His labs showed an elevation in transaminases to > 15x the upper limit of normal. Because of uncertainty regarding which drug was contributing, he was admitted and monitored overnight. The next day his transaminases were down trending, suggesting axitinib effect. His axitinib was permanently held, but he continued on immunotherapy.

Using this case, Dr. Plimack illustrated her principles of toxicity management in combination VEGF TKI and immunotherapy. If unclear which drug is causing the effect, hold both drugs. Drugs like axitinib have a short half-life (6 hours for axitinib) and you can either permanently discontinue the drug or hold and restart at a lower dose based on the severity of the side effect. If the side effect is progressive after holding both agents, then this should be viewed as an immunotherapy side effect with work-up and high dose steroids. Based on the nature of the immunotherapy side effect, re-challenge may be considered. TKI therapy is typically restarted by Dr. Plimack once the steroid dose is tapered to below 20 mg.

Finally, Dr. Plimack described her reasons for temporarily holding versus permanently discontinuing either VEGF TKI or immunotherapy. These are summarized below.