Radiotherapy in general in RCC does not have the most robust data to support it outside focal therapy to bone or brain metastasis (where it has a clear role). Clear cell renal cancer cell lines are very resistant to radiotherapy, and perioperative randomized radiotherapy trials have been negative. However, stereotactic body radiation therapy (SBRT), which provides a higher dose in lesser fractions, may have differential efficacy.

Dr. Powles discussed the definition and data supporting the abscopal effect. As shown in the cartoon below, there is some pre-clinical data supporting an abscopal effect with radiotherapy. This is defined at directing radiation therapy at a certain location and seeing a shrinkage of tumor away from the radiation field (ab = away, scopus = target). 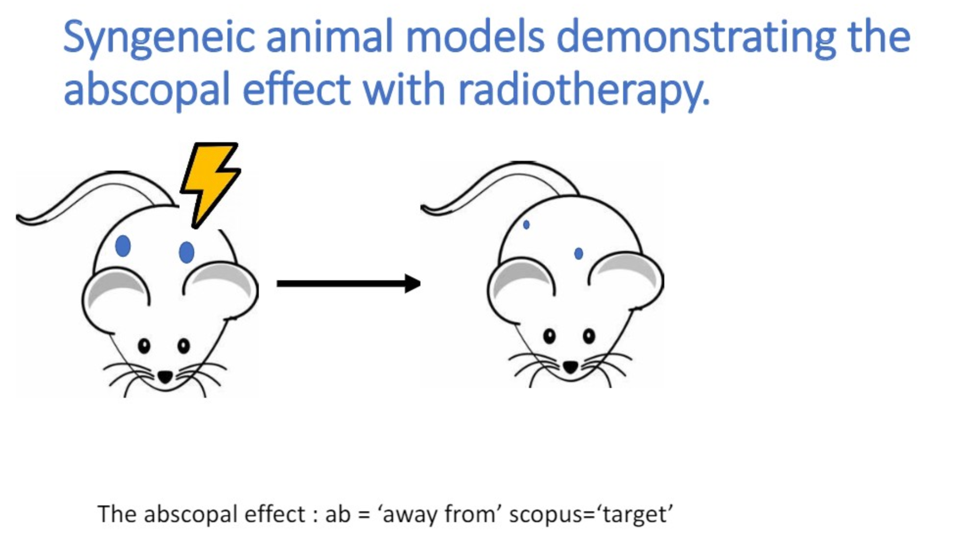 First described in the 1950s prior to immune checkpoint blockade, the proposed mechanism of synergy between radiotherapy and ICB is that radiation therapy causes cell death releasing potential neoantigens that can prime the immune system to detect similar neoantigens in other distant sites of cancer. It is important to note that beyond preclinical models and case reports, there is no prospective data supporting an abscopal effect in renal cell cancer, and really across oncologic care in general. This may be in part due to differences in approach (what doses of radiation in what fractions, where do you radiate, what immunotherapy to give in combination, and how do you stagger the treatments relative to each other).

Given limited data in RCC, Dr. Powles described that the two studies presented were important to see if the field can validate the preclinical findings regarding abscopal effect. The schema of each trial is summarized below. There are differences in the histologies included and type of immunotherapy used.

To get a sense of how these data can be interpreted, Dr. Powles benchmarked the results against immune therapy, with the caveat that these are not true head-to-head comparisons, just ways to get a general sense of what is going on. As shown in the slide below, there is not much difference between the median progression free survival in these two abscopal trials relative to the immune therapy trials illustrated.

Despite these studies that either did not meet their primary endpoint or show major difference relative to prior studies, Dr. Powles notes that further understanding of the interplay between radiation therapy and immunotherapy in renal cancer should still be explored to further evaluate the available preclinical data. Indeed, there are many trials ongoing for SBRT in RCC, such as CYTOSHRINK, which looks at radiation therapy to the primary tumor specifically.

Finally, Dr. Powles noted that it is fundamentally important to validate preclinical findings in clinical trials specifically in renal cell cancer, as the underlying immunology and biology is certain to be quite different.