He took a humorous, albeit apropos, approach to explaining the concept of value-based decision making. He pointed out, as many in the audience already knew, that today is Valentine’s Day. He put a play on words and called the scenario GUSFASCO (or GU ASCO fiasco).

In this GUSFASCO situation, many of the attendees are separated from their loved ones on Valentine’s day. They have a few options, and have to weigh each of the options.

Option 1: Make a phone call to wish loved one Happy Valentine’s day.
Option 2: Make phone call and send flowers
Option 3: Buying a diamond ring as an apology
Ultimately, the decision to choose one option over the other is based on each individual’s willingness to pay (WTP) – or amount cutoff per unit of effectiveness that they are willing to pay. Each household or individual has competing financial interests that will affect the WTP level – bills, food, vacation, etc.

For example, if the WTP is set at $10/point, then flowers are the best option, rather than the ring: 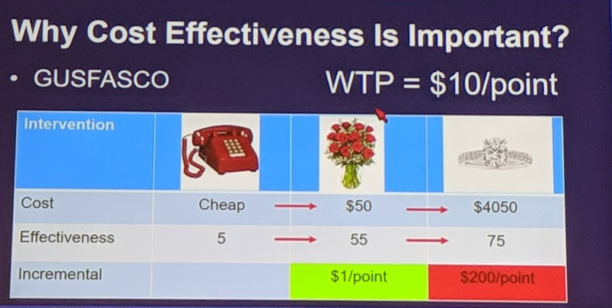 Ultimately, value-based decision making is based on:

So, taking this to a real-life scenario with metastatic castration-sensitive prostate cancer, where ADT+docetaxel or ADT+abiraterone are the recommended treatments, he compared the data for both options:

His conclusions were as follows: 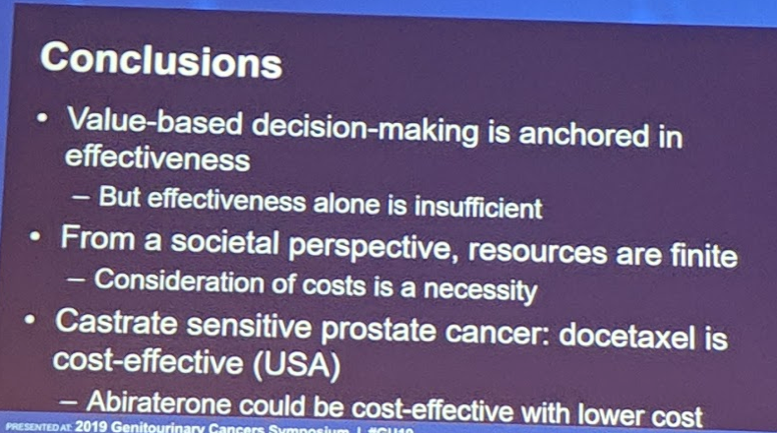