(UroToday.com) Dr. Schweizer began the case-based discussion of T-cell redirection against prostate cancers using the context of the case shown below.

Despite progress on multiple lines of therapy for metastatic castration resistant prostate cancer, this patient has good performance status and organ function, and would be a reasonable candidate for clinical trials. Dr. Schweizer discussed that he may consider this patient for a trial testing the efficacy of bi-specific T-cell engagers (BiTEs).

BiTEs are immunotherapies that engage both T-cells as well as a tumor-specific antigen to induce cytotoxic cell death as well as immune cell compartment expansion. An example of a BiTE that is undergoing clinical testing in prostate cancer is AMG160, which engages T-cells and PSMA-expressing cells including prostate cancer cells. Other BiTEs are being developed against other tumor antigens like PSCA, KLK2, and other proteins.

Dr. Schweizer summarized data around a few BiTEs that are in clinical development. He summarized data originally presented at ESMO 2020 of the first in human study of AMG160 monotherapy as part of a dose-exploration cohort in patients who had progressed on second-generation androgen pathway inhibitors as well as taxane (or ineligible for taxane). Of the 43 patients presented, the majority of patients had received four or more prior lines of therapy. Over 90% of patients had clinical evidence of cytokine release syndrome (CRS), with 11 patients sustaining grade 3 CRS, though no grade 4 or 5 events were reported. About a third of patients had PSA responses of more than 50%, and 8 patients had stable disease with two patients having partial responses by RECIST criteria.

He then summarized phase 1 data for the HPN424 BiTE which has a similar structure to AMG160 but also has an albumin linker between the CD3 and PSMA domains to extend half life. Data first presented at ASCO 2021showed stable disease in over 50% of the heavily-pretreated patients on study, and PSA50 responses in 5.4% of patients. A large majority of patients had CRS, though only 4% of patients had grade 3 or higher symptoms. Dr. Schweizer cautioned against comparing the AMG160 and HPN424 efficacy results given they were data from various stages of non-equivalent dose escalations. 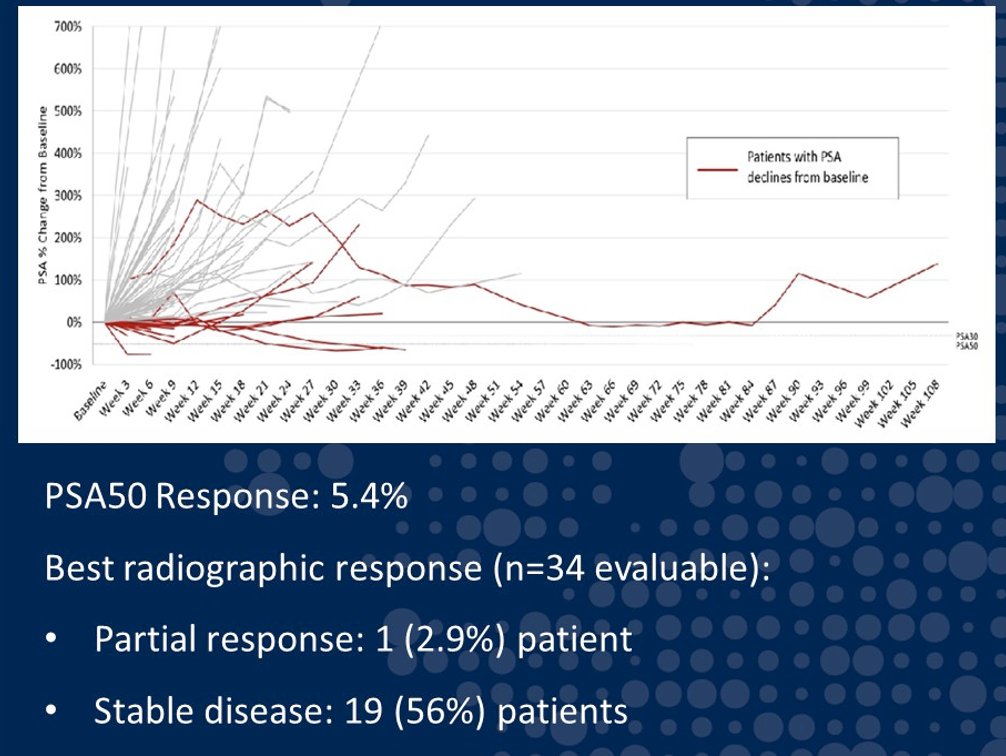 The patient in this case was enrolled on a BiTE immunotherapy trial. This required weekly infusions and inpatient hospitalization for monitoring until the 2nd infusion at the target dose was administered. With the priming dose, dexamethasone premedication was given, and the patient sustained rigors, tachycardia and low grade fever for several hours. A week later at the target dose with premedication, the patient again had rigors and tachycardia as well as hypotension requiring IV fluids and brief treatment with pressors. CRP rose from 8 to 188. Tocilizumab, an IL-6 receptor antibody, was administered in response to the pressor-dependent hypotension with rapid resolution of symptoms.

Dr. Schweizer offered a primer on cytokine release syndrome (CRS), which is a non-antigen specific toxicity reflecting high levels of immune activation and release of cytokines, resulting in fever and potentially multi-organ system dysfunction. One clinically important cytokine mediator of CRS is IL-6. The table below lists some of the symptoms that are associated with CRS. 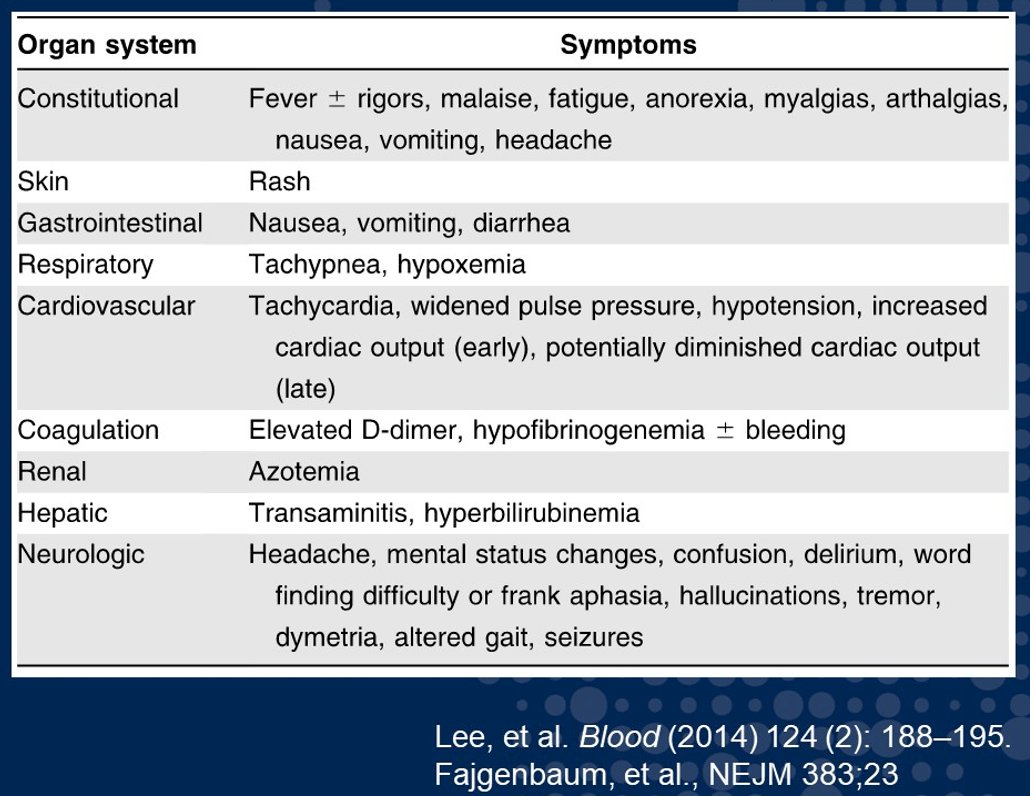 Standard for clinical grading of CRS are shown below.

Clinical management of CRS is aimed at ruling out other etiologies that can mimic CRS such as sepsis, and should include a broad laboratory panel (CBC, metabolic panel, inflammatory markers such as CRP and ferritin, coagulation panel, infectious work-up, consideration of cardiac and CT imaging). As shown in the data above, the CRS observed with BiTE therapy is usually low grade, ameliorated by dexamethasone premedication, and can be managed with IV fluids and anti-pyretics. Other measures that can reduce the severity of CRS include a dose step-up method starting with a lower priming dose before giving the target dose of the agent, and subcutaneous administration which may reduce cytokine levels, though this has been hampered by the development of anti-drug antibodies.

To wrap up this case presentation, the patient sustained a PSA decline of greater than 50% and had stable disease on conventional imaging at three months. At six months his PSA returned to his baseline, but his disease was stable on imaging. The patient discontinued therapy due to the side effects of dry mouth and anorexia.