(UroToday.com) The 2022 ASCO annual meeting featured a session on prostate cancer, including a discussant presentation by Dr. Heather Cheng discussing important abstracts incorporating inhibition of AR + PARP in advanced prostate cancer. Dr. Cheng discussed the following abstracts “BRCAAway: A randomized phase 2 trial of abiraterone, olaparib, or abiraterone + olaparib in patients with mCRPC with DNA repair defects” presented by Dr. Maha Hussain, “Tolerability of abiraterone combined with olaparib in patients with mCRPC: Further results from the phase III PROpel trial” presented by Dr. Antoine Thiery-Vuillemin, and “Gene-by-gene analysis in the MAGNITUDE study of niraparib with abiraterone acetate and prednisone in patients with mCRPC and HRR gene alterations” presented by Shahneen Sandhu.

By way of background, Dr. Cheng notes that ~25% of mCRPC harbor inactivating changes in genes important to homologous recombination repair (HRR). Patients with mCRPC associated with such mutations (somatic or germline) are candidates for precision therapy, such as PARP inhibitor and platinum chemotherapy. Olaparib and rucaparib are FDA approved for more than two lines of therapy in mCRPC with mutations in BRCA2, BRCA1, and other HRR genes. Niraparib, talazoparib, plus other agents are also actively being studied.

Dr. Cheng notes that there are several open questions in this disease space: 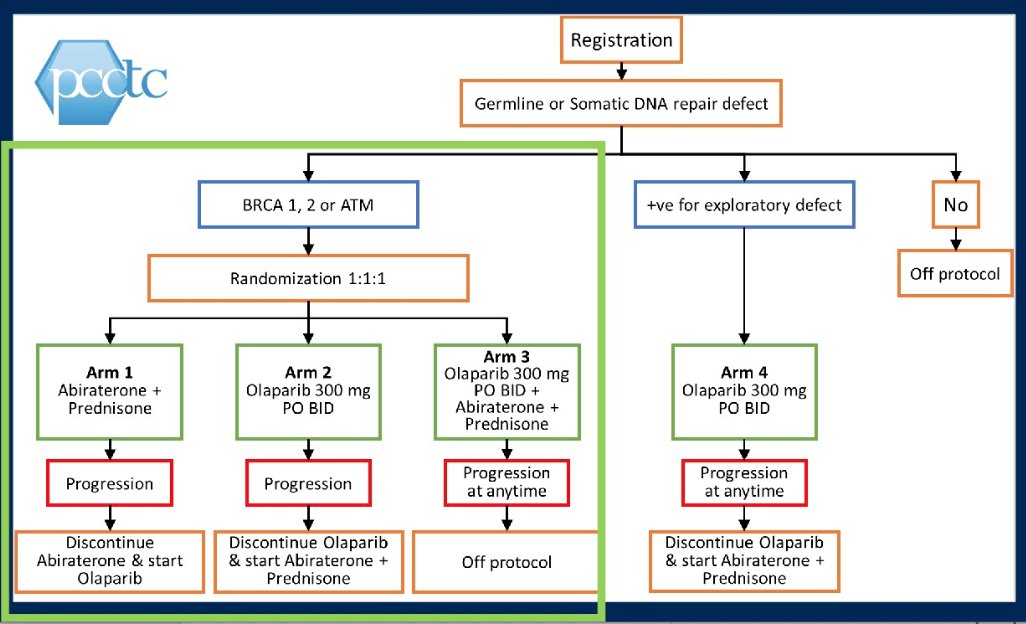 The Kaplan Meier curves for time to first progression by study arm is as follows: 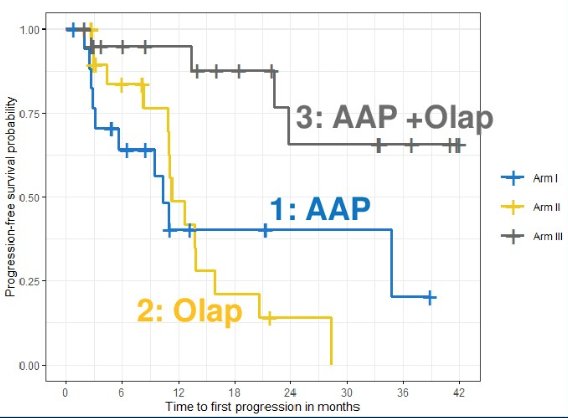 As follows is a summary of the BRCAAway, PROpel, and MAGNITUDE studies, highlighting each trial’s eligibility, biomarker considerations, treatment, and rPFS outcomes:

Dr. Cheng then discussed updated safety data from the PROpel trial. The main take-away points from this analysis are as follows:

Dr. Cheng notes that 16% of patients had >=1 blood transfusion, which is burdensome for patients, given that 1-2 units of red blood cells can take 8-12 hours to infuse. Furthermore, although most venous thromboembolisms were incidental/asymptomatic, management is also burdensome given that anticoagulation is daily or BID injection or oral medication. Taken together, patient-centered considerations include time off of work, cost of medications, drug-drug interactions, higher bleeding risks, and greater treatment complexity. Dr. Cheng’s summary for this study is that (i) the combination of abiraterone + olaparib is tolerable, (ii) anemia and venous thromboembolism rates are ~5-15% and can be managed, however (iii) management comes with added patient burden.

The third study discussed by Dr. Cheng was the gene-by-gene analysis of the MAGNITUDE study. This was a pre-specified analysis was undertaken of the primary endpoint (radiographic progression-free survival [rPFS] by BICR), secondary endpoints (time to cytotoxic chemotherapy, time to symptomatic progression, overall survival), as well as time to PSA progression and overall response rate across 186 patients (91 randomized to niraparib + abiraterone acetate + prednisone, and 95 to placebo + abiraterone acetate + prednisone) with an alteration in the ATM, BRIP1, CDK12, CHEK2, FANCA, HDAC2, or PALB2 gene (excluding co-occurring alterations). This analysis of individual alterations was not powered for formal statistical inference. Given the rarity of some alterations, groups based on functional similarity (HRR-Fanconi group [BRIP1, FANCE, PALB2] and HRR-associated group [CHEK2, HDAC2]) are also presented. Different proteins can detect double-strand breaks, such as the FANC complex, which recruit HRR effectors including BRCA1, BRCA2, and PALB2. The trial schema for this trial and the analysis is as follows:

Dr. Cheng notes that for PALB2, CHEK2, and HDAC2, each of these mutations showed benefits across all clinical endpoints. For CKD12, there was no benefit in the primary or >1 secondary endpoint, and for ATM there was a mixed bag for clinical efficacy: 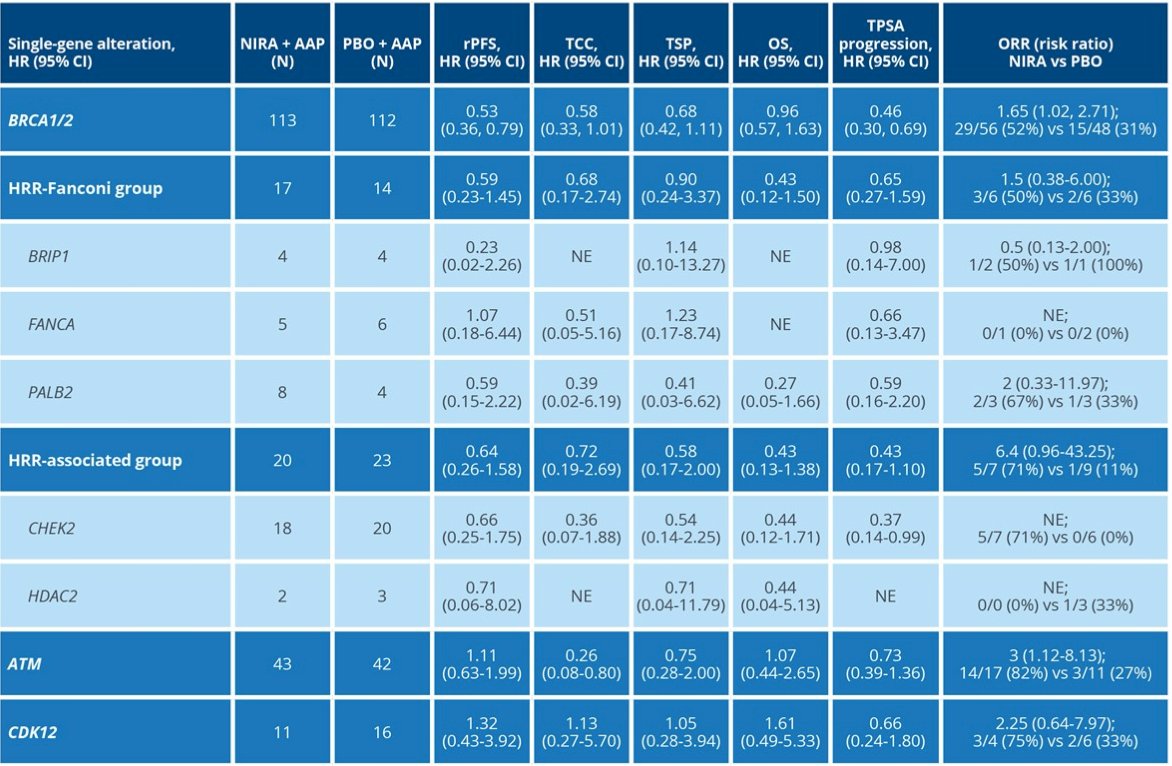