Dr. Garzotto began by highlighting the ESTRO-EORTC classification of oligometastatic disease. While many focus on differences in terms of synchronous and metachronous disease, he highlighted that there are nine different categories include de novo versus repeat, progressive versus persistent disease, and spontaneous versus induced disease. 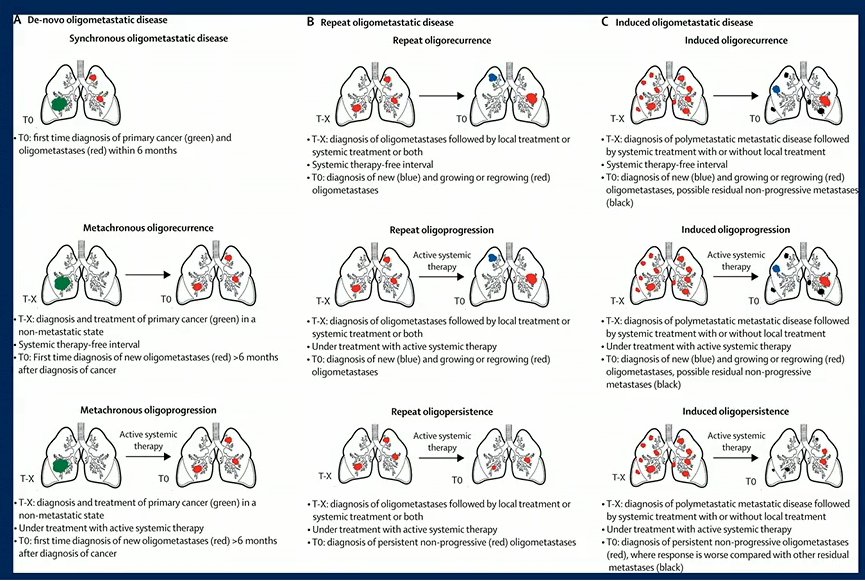 While these distinctions are drawn on the basis of radiographic characteristics, Dr. Garzotto emphasized that the biology of oligo vs poly metastatic disease suggests meaningful differences. He highlighted two specific recent publications to this end. In TRACERx Renal, Dr. Garzotto emphasized that there are specific genomic characteristics of clear cell renal cell carcinoma can allow prediction of progression trajectory. Assessed in a large, multi-cancer analysis of approximately 25,000 patients and 100,000 metastatic lesions from Memorial Sloan Kettering, he noted that chromosomal instability predicts oligo vs poly metastatic disease. Thus, the identification of oligometastatic disease doesn’t necessarily just highlight an early identification of the metastatic trajectory, but potentially different underlying biology.

In prostate cancer, Dr. Garzotto emphasized three relevant randomized controlled trials in patients with low-volume or oligometastatic prostate cancer. First, he noted results from Arm H of the STAMPEDE trial in which patients with low volume synchronous metastatic disease were randomized to local prostate-directed radiotherapy (but not metastasis-directed therapy) in addition to systemic standard of care. Two small trials, STOMP and ORIOLE, have assessed the role of metastasis-directed therapy using stereotactic body radiotherapy (SBRT) in patients with metachronous metastatic disease. These studies have demonstrated improvements in surrogate outcomes including ADT-free survival and a PSA-driven composite progression-free survival outcome. However, Dr. Grazotto highlighted the need for studies with endpoints that have clinical utility.

An alternative to radiotherapy in terms of metastasis-directed therapy, as highlighted in Abstract 5009, is surgery. In this study, the authors performed PSMA-guided salvage surgery among patients with biochemical recurrent disease.

Highlighting baseline characteristics, he noted that these patients had high grade disease and many had extracapsular extension as well as having received post-operative radiotherapy. Not surprisingly then, many patients had been referred from radiation oncologists due to difficulties with giving further metastasis-directed radiotherapy. He noted a biochemical complete response rate of approximately 60% following PSMA-radioguided surgery. He contrasted these data with the results of the STOMP trial in which patients were treated with metastasis-directed radiotherapy noting that the surgical outcomes appear favourable.

Examining longer-term outcomes including biochemical and treatment-free survival, he noted an inflection in the curve for biochemical recurrence around 8 months. This suggests that we may be able to stratify these patients into favourable and unfavourable groups for this type of treatment approach. In multivariable models, the serum PSA level prior to radio-guided surgery, the number of PSMA-avid PET lesions, and the presence of disease outside the pelvis were associated with biochemical outcomes.

Again comparing to STOMP, he noted that these results compared favourably to the biochemical recurrence free survival outcomes of that trial. Summarizing, he noted that careful selection for this experimental approach is needed. The lack of a control arm clearly limits the interpretation of these results though certainly both the feasibility and preliminary efficacy has been demonstrated. He noted that there is an unmet need in the treatment of patients with recurrent disease following local therapy. While trial data are needed, PSMA-radioguided surgery may be a suitable treatment option for patients who have low volume, low PSA disease in the pelvis.

Moving to the next abstract (5011), Dr. Garzotto discussed metrics of prostate specific membrane antigen (PSMA)-PET imaging to assess response to stereotactic ablative radiotherapy in patients with oligometastatic castration-sensitive prostate cancer when correlated with radiographic progression-free survival. Dr. Garzotto noted that a number of changes occurred between the initial abstract and subsequent poster presentation. Notably, the authors changed from a PSMA response (as defined at 30% or greater decline in SUVmax) to PSMA progression (as defined as 20% or greater increase in SUVmax). Additionally, the study included a 31 patients discovery set and 96 patient validation set. While ADT was used in the validation set, it was not in the discovery set. Further, the authors changed the criteria for responses when their initial definition failed to meet significance. Dr. Garzotto noted that the more work that is done with data prior to model selection, the greater risk of overfitting the model. He further emphasized that, while this is an important question, these data should be considered very exploratory. In part this is because it is unclear whether decreases in SUVmax seen are due to the radiotherapy administered or concomitant ADT used. However, the authors concluded that a lack of PSMA progressive lesions was associated with improved metastasis-free survival.

He further noted that there are changes in SUVmax that are likely associated with ablative therapy. Further, PSMA-based progression may predict subsequent metastasis on conventional imaging. However, the authors could not assess commonly used covariates including PSA and use of ADT. He further noted a recently published consensus statement on the use of PSMA-PET/CT response assessment noting that this should really only be used for clinical trials or potentially inconsistent clinical findings and requires further prospective validation before clinical utility.

Finally, he discussed the SALV-ENZA trial, examining the role of enzalutamide monotherapy in patients undergoing salvage radiotherapy. This trial is in the context of three prior trials (of which two have reported out) demonstrating improved outcomes for patients who received concomitant ADT (either 24 months of bicalutamide or 6 months of goserelin) along with salvage radiotherapy.

Given the rapidly increasing role of novel hormonal therapies in prostate cancer, this trial sought to assess if the use of these agents will improve outcomes for patients undergoing salvage radiotherapy. To do so, the authors performed a phase II randomized controlled trial among a planned 96 patients with biochemical recurrence following radical prostatectomy.

With a median follow-up of 34 months, the authors demonstrated improved failure-free survival for patients receiving enzalutamide, with a particularly large benefit among those with T3 disease and positive surgical margins.

Dr. Garzotto therefore concluded that short-term enzalutamide improved biochemical recurrence with a favourable toxicity profile. However, clinically meaningful endpoints remain to be assessed. Given the recently demonstrated benefit of novel hormonal therapies in the non-metastatic castration sensitive space along with primary radiotherapy for high-risk disease, these data suggest that treatment intensification may have a role earlier in the disease process.