(UroToday.com) At the 2022 American Society of Clinical Oncology Annual Meeting held in Chicago and virtually, the oral abstract session focused on Kidney and Bladder cancers on Friday afternoon included a presentation from Dr. Christopher Ryan discussing the results of the EVEREST trial of everolimus as adjuvant therapy for patients with renal cell carcinoma (RCC).

For patients with high-risk localized or locally advanced RCC, surgical resection remains the standard of care. However, these patients have a high risk of relapse. As a result, there has been significant interest in the use of adjuvant therapies. Notwithstanding a disease-free survival benefit seen with sunitinib in the S-TRAC trial, studies of adjuvant tyrosine-kinase inhibitors have been resoundingly negative and this approach is not widely used in practice. Recently, data from the KEYNOTE-564 trial demonstrated a benefit to adjuvant use of the immune checkpoint inhibitor pembrolizumab in this setting. Notably, even among the trials demonstrating improvements in disease-free survival, there has been no demonstrated overall survival benefit.

The authors enrolled patients with treatment-naïve, non-metastatic, fully-resected RCC at intermediate-high- (pT1 G3-4 N0 to pT3a G1-2 N0) or very high-risk (pT3a G3-4 to pT4 G-any or N+) risk of recurrence. This was used in the ASSURE study as well.

Enrolled patients were randomized in a 1:1 fashion to receive either everolimus 10 mg PO daily x 54 weeks or placebo within 12 weeks of radical or partial nephrectomy. Randomization was stratified by risk group, histology (clear vs. non-clear cell), and performance status (0 vs. 1).

The primary study endpoint was recurrence-free survival (RFS), with key secondary endpoints including overall survival (OS) and adverse events (AEs). While the study was originally designed with a sample size of 1170 based on an 85% power to detect a 22% reduction in disease free survival with a one-sided alpha of 0.025. As of July 2015, there was a revision of the protocol due to early treatment discontinuation resulting in the need to increase sample size to 1464. With this sample size, the study was therefore designed and powered to detect an 18% reduction in the risk of RFS with everolimus compared to placebo, corresponding to an improvement of median RFS from 6.75 (based on data from the E2805 ASSURE trial) to 8.23 years.

The authors planned four pre-specified analyses with a final analysis at 804 events. Final analysis, using Kaplan Meier analysis and a stratified log-rank test, was to occur after 804 total events or by March 2022, whichever occurred first. However, the event rate was substantially lower than anticipated. Thus, the study closed with final analysis at March 2022 with 556 events.

Across both arms, 45% of patients were at intermediate high- and 55% were at very high-risk risk of recurrence. The vast majority of patients (83%) had clear cell histology while the remaining 17% had non-clear cell disease. Most patients (91%) underwent radical nephrectomy.

The DSMC recommended study continuation after each of 4 pre-specified interim analyses. As of the final analysis on February 23, 2022, 556 DFS events had occurred among 1499 eligible patients. Over a median follow-up was 76 months, RFS was improved with everolimus as compared to placebo (HR 0.85, 95% CI, 0.72 – 1.00; 1-sided p=0.0246). This however failed to meet the pre-specified, one-sided significance level of 0.022 which accounted for interim analyses. In both arms, median RFS was not reached; however, the 6-year RFS estimate was 64% for everolimus and 61% for placebo. 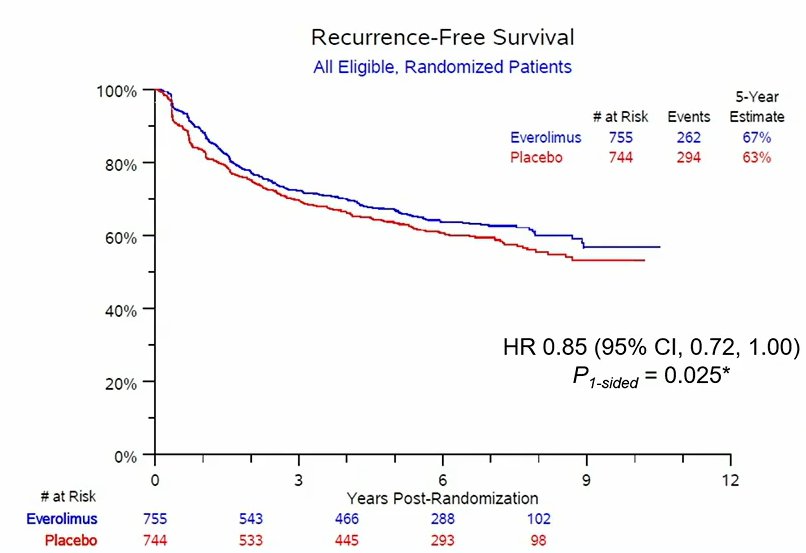 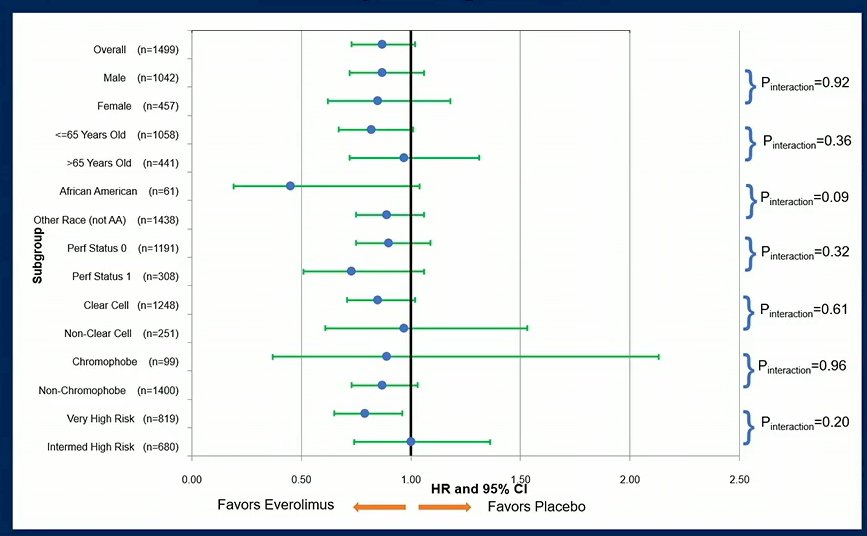 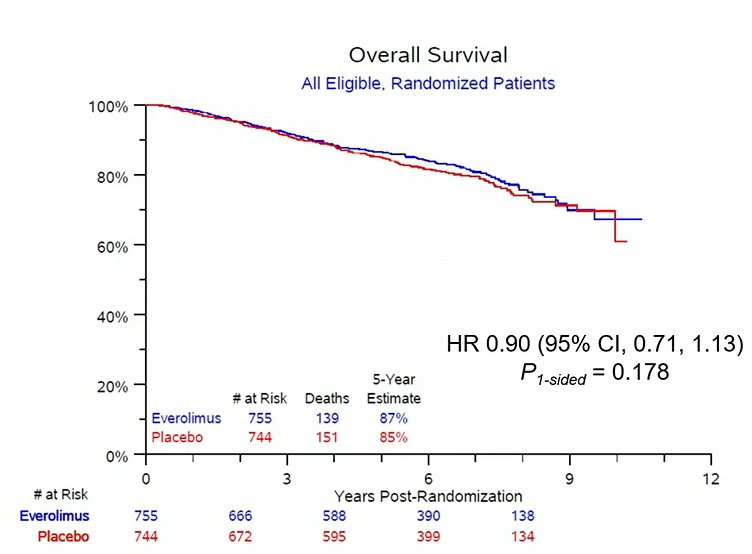 Dr. Ryan concluded that, while adjuvant everolimus improved RFS in patients with RCC after nephrectomy, it failed to me the pre-specified statistical threshold for significance. The RFS improvement was seen despite a high rate of early treatment discontinuation. Notably, there was a differential benefit on the basis of risk category with a 21% improvement in RFS observed in patients with very high-risk disease, a group for whom adjuvant therapy may be most relevant.