(UroToday.com) Beginning with the introduction of docetaxel for metastatic castration resistant prostate cancer (mCRPC) in 2004, there has been a dramatic and rapid proliferation of systemic therapy options in advanced prostate cancer. Following developments in the mCRPC disease space, many of the same treatments have now been adopted in patients with metastatic castration sensitive disease (mCSPC). Since 2015, the addition of docetaxel, novel hormonal therapies (including abiraterone acetate, enzalutamide, and apalutmide), and local prostate-directed radiotherapy (in those with low-volume metastases) have proven benefit in patients with mCSPC. Tak is an oral selective nonsteroidal 17, 20-lyase inhibitor that blocks the synthesis of gonadal and adrenal androgens. It has previously been assessed in metastatic castration-resistant disease. 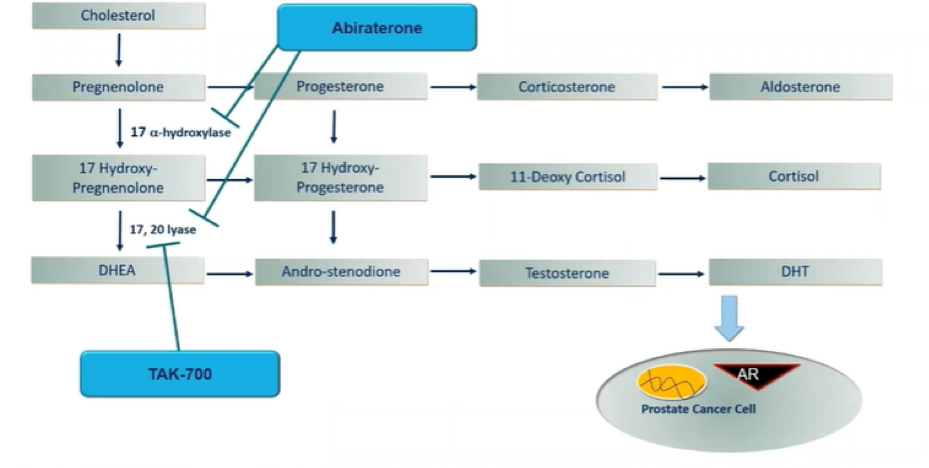 The authors accrued patients with newly diagnosed mHSPC with a Zubrod performance status of 0-2 and a PSA of ≥ 2 ng/ml and randomized them in a 1:1 fashion to ADT + Tak (300 mg twice daily) or ADT + bicaluamide (50 mg daily). Randomization was stratified by PS (0-1 vs ≥2), extent of disease (minimal vs extensive), and receipt of ADT prior to registration (yes vs no).

The primary endpoint of the trial was overall survival (OS) with secondary endpoints including progression free survival (PFS; based on PSA, imaging or clinical progression), PSA at 7 months (≤0.2 vs 0.2 < PSA; ≤-4 vs. > 4 ng/ml) and adverse event (AE) profile.

The authors randomized 1313 patients between March 2013 and July 2017 of whom 32 were ineligible and 2 withdrew consent, leaving 1279 patients in the intention-to-treat (ITT) analysis. The median age of included patients was 68 years and 10% of subjects were Black. At enrollment, the median PSA was 30 ng/mL (range 2-6710) and 49% of patients had extensive disease. Notably, Dr. Agarwal highlighted that Black men comprised 10% of this study cohort. 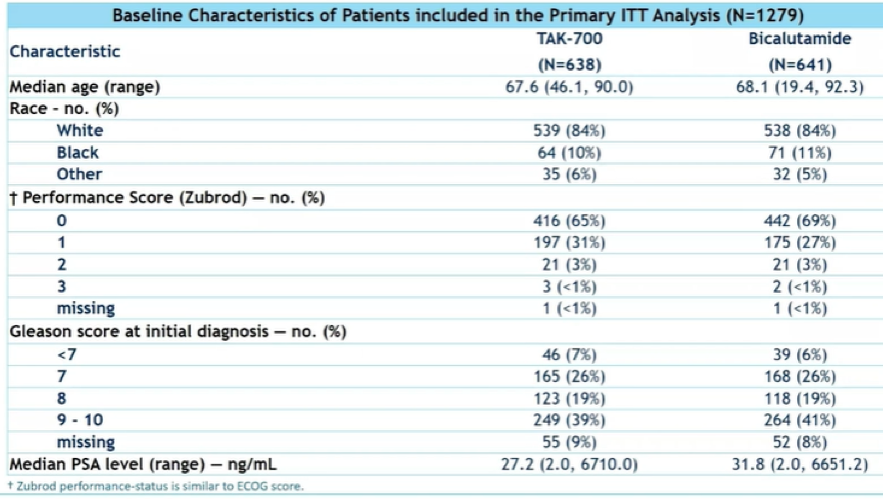 Subgroup analyses demonstrated generally comparable results across a variety of baseline characteristics. There was a suggestion of less benefit among men who received androgen deprivation therapy prior to registration. 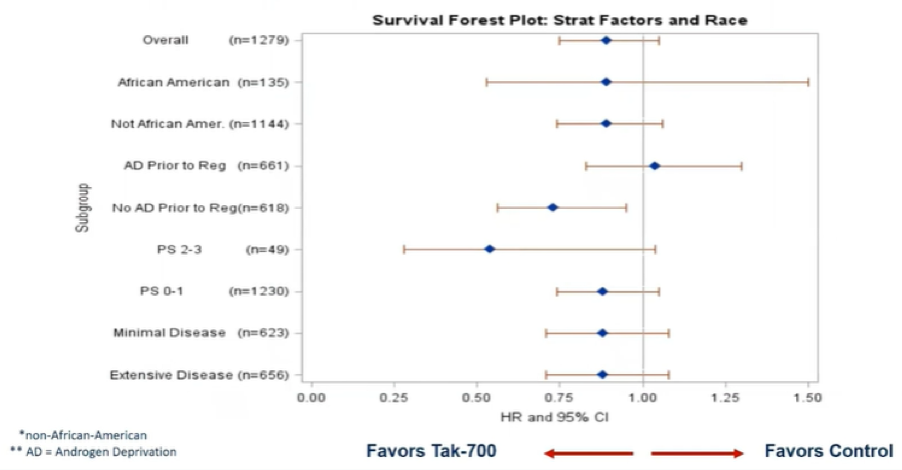 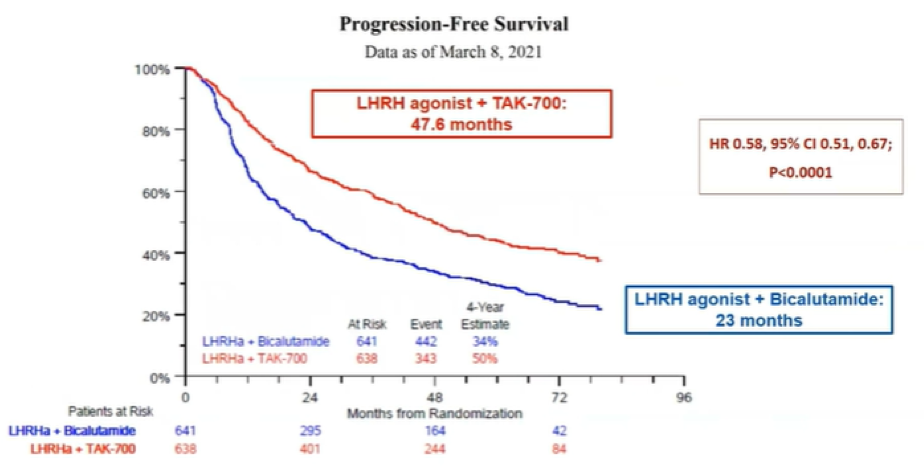 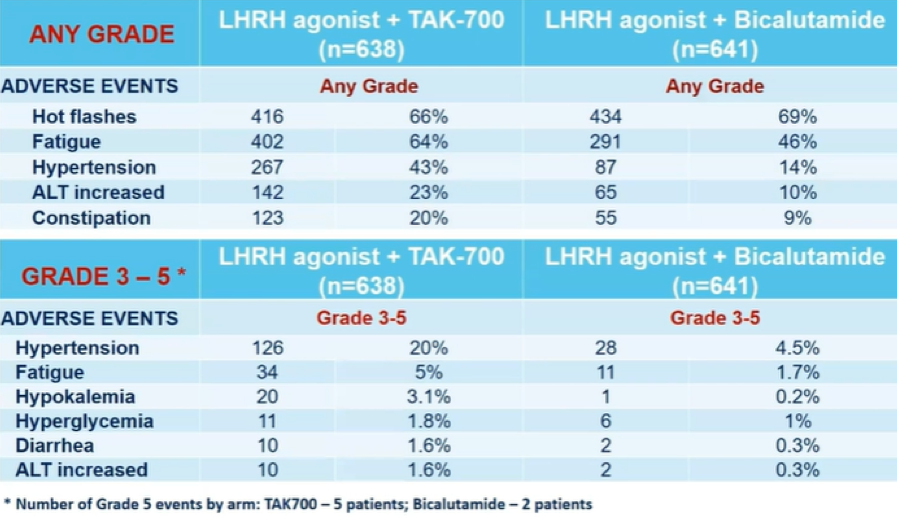 As median overall survival was substantially longer among men in the control arm than expected, the authors performed post hoc analyses according to the use of subsequent life-prolonging therapy. Among men randomized to TAK-700, 61.3% of patients received subsequent post-protocol life-prolonging therapy while rates were somewhat higher among those randomized to bicalutamide (77.4%). Dr. Agarwal then provided a comparison of these results to contemporary phase III trials in this disease space. He emphasized that survival in the comparison of this SWOG S1216 trial is substantially longer among patients in the control arm, compared to previous studies, highlighting that the overall quality of care patients are receiving (including in subsequent stages of disease) has improved over time.

The authors conclude that, despite clinically meaningful improvement in various outcome measures with Tak + ADT over ADT + bicalutamide in men with mHSPC, the improvement in OS did not meet the pre-specified criteria for statistical significance. He further highlighted that this study is strengthened by the enrollment of patients from both academic and community centers including higher than prior enrollment of African American men.

Presented by: Neeraj Agarwal, MD, Professor in the Division of Oncology, Department of Medicine, at the Huntsman Cancer Institute (HCI) at the University of Utah School of Medicine. He is the Huntsman Cancer Institute (HCI) Presidential Endowed Chair of Cancer Research, and the Director of the Genitourinary Oncology Program, Dr. Agarwal also serves as the physician-scientist and senior director of clinical research innovation at HCI, Salt Lake City, Utah