(UroToday.com) In a recent publication, Dr. Daniel Khalaf and colleagues reported the results of a randomized, open-label, Phase II crossover trial (NCT02125357) testing the optimal sequence of abiraterone acetate and enzalutamide in metastatic castration-resistant prostate cancer (mCRPC). This study suggested that treating first with abiraterone, then enzalutamide led to a longer time to second prostate-specific antigen (PSA) progression and higher rates of PSA response than treating first with enzalutamide then abiraterone. In a second publication, Dr. Khalaf and colleagues reported that sequencing abiraterone first in was associated with better patient-reported QOL metrics for patients older than 75 years of age as assessed by the FACT-P and PHQ-9 instruments. In this poster, the authors report on the time to quality of life deterioration (TTQOLD) and further examine depression scores and cognitive impairment scores for either sequence of anti-androgen therapies.

Questionnaires were administered at baseline, at cross-over, at the end of treatment, and either every four weeks (Functional Assessment of Cancer Therapy-Prostate [FACT-P], Patient Health Questionnaire-9 [PHQ-9]) or every 12 weeks (Montreal Cognitive Assessment [MoCA]). A change in FACT-P score of more than 10 was considered clinically significant, with different changes assigned as significant for various subscales. TTQOLD was determined by time from baseline (start of first-line, start of second-line, or overall) until a clinically significant decline in FACT-P score. The design of the trial is shown below.

Response rates to all surveys were high (more than 80% for FACT-P even in second line, more than 70% for MoCA in second line). No difference was detected between either arm for TTQOLD with first-line therapy, second-line therapy, or throughout the entire treatment sequence of the trial. Regarding FACT-P subscales, Arm B was associated with statistically worse physical well-being (PWB) scale scores. 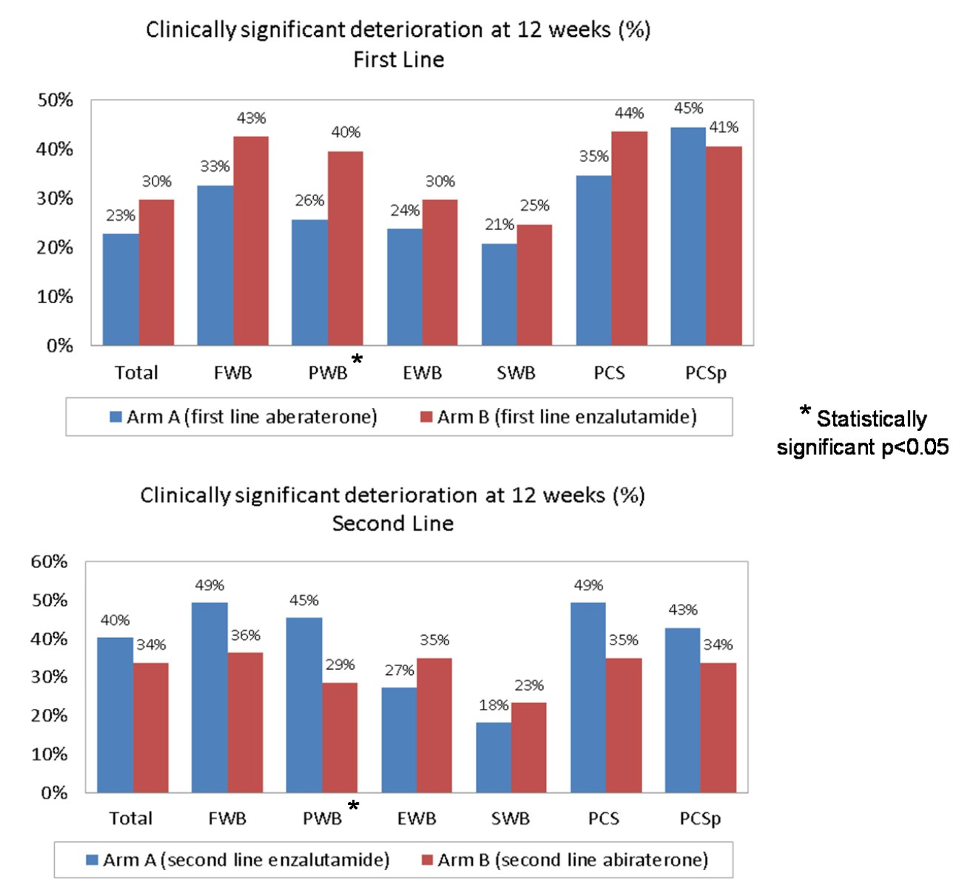 More patients had a PHQ-9 score ≥ 10 after therapy on enzalutamide, relative to abiraterone. No significant differences were detected in cognitive function as assessed by MoCA.

Overall, these QoL data from a randomized Phase II study suggest that treating patients with mCRPC with enzalutamide first is associated with higher PHQ-9 score and a greater decline in physical well-being, but not overall well-being or cognitive function changes.