(UroToday.com) There has been a rapid evolution in treatment options for patients with non-metastatic castration-resistant prostate cancer since the spring of 2018. Up until the presentation of SPARTAN and PROSPER trials, reporting on the use of apalutamide and enzalutamide in non-metastatic castration-resistant prostate cancer, at GU ASCO in February 2018, there were no specifically approved treatment options for these patients. These agents, as well as darolutamide, were subsequently approved based on demonstrated improvements in metastasis-free survival. While metastasis-free survival is a reasonable surrogate for overall survival in this population, there were questions as to whether the benefit of using androgen-axis inhibitors would translate to overall survival benefits, in part due to the differential survival effect seen according to disease burden in CHAARTED.


In three poster presentations at this year’s ASCO Virtual Annual Meeting, use of apalutamide, enzalutamide, and darolutamide in men with non-metastatic castration-resistant prostate cancer was shown to improve overall survival. In-depth coverage of each of these presentations is provided in separate, related articles on the UroToday coverage of the ASCO Virtual Annual Meeting.

As a discussant, Dr. Beer provided a discussion contextualizing these results.

He began by summarizing that a holistic analysis of the ARAMIS, SPARTAN, and PROSPER trials demonstrates that early intensification of treatment directed at the androgen receptor axis in patients with castration-resistant prostate cancer translates to an overall survival benefit. He suggested that meaningful differences in efficacy are unlikely to be present between the agents.

He emphasized that, despite the significant differences in overall survival already apparent, these data remain immature as median overall survival has yet to be reached in any of the trials. For context, Dr. Beer cited data from the PREVAIL trial of enzalutamide in early metastatic castration-resistant prostate cancer. The sequential analysis of this study demonstrated an evolution in the effect estimate, as highlighted in the table below.
However, ongoing analysis of this trial suggests that early intervention may have long-lasting benefits.

Dr. Beer highlighted that, when assessing overall survival, the question at hand is somewhat different than when assessing the primary outcome of each of these studies, metastasis-free survival. In assessing overall survival, the question is, does early administration of androgen axis targeting agents at the time on nmCRPC confer a benefit compared to later administration at the time of mCRPC. To address this question, all patients randomized to placebo need to receive appropriate therapy at the time of the development of metastasis. However, this was not the case as at least 14% of patients in these trials did not receive appropriate treatment.

However, when administering treatment earlier in the disease process, Dr. Beer highlighted the importance of considering the toxicity and cost of therapy. Specifically focusing on PROSPER and ARAMIS, he noted that rates of key adverse events including fatigue, falls, dizziness and mental impairment are lower among patients receiving darolutamide when compared to those receiving enzalutamide, and much more comparable to those receiving placebo.

He then describes the DaroAct trial, an in-progress trial directly comparing these two agents to assess differences in physical and cognitive functional outcomes.

Moving forward, he suggests that we may consider whether we can de-escalate therapy to reduce the burden on therapy while retaining treatment benefits. In this context, he alludes to the data from Crook et al. looking at intermittent androgen deprivation therapy in the non-metastatic setting. Adopting such an approach may have significant cost-related implications as highlighted here. 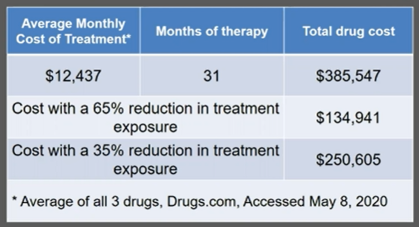 Additionally, Dr. Beer highlighted that the current definition of nmCRPC according to conventional imaging is often associated with proven metastatic disease when using next-generation imaging approaches such as PSMA-PET/CT.

Finally, Dr. Beer postulated that we should consider treatment intensification with two-drug combinations to lead to more complete inhibition of the androgen axis. However, he highlighted caution given prior experience with complete androgen blockade using first-generation anti-androgens.