(UroToday.com) Checkmate-214 established combination nivolumab/ipilimumab as an effective first-line therapy for patients with metastatic RCC1. Treatment with nivolumab/ipilimumab begins with an induction phase with 4 cycles of ipi/nivo given every 3 weeks, followed by a maintenance phase with nivolumab given every 2 weeks. This regimen was able to achieve a confirmed objective response rate (ORR) of 42% with a complete response (CR) rate of 9%. However, this was not without toxicity.

46% of patients experienced grade 3/4 toxicity (diarrhea, fatigue, rash, nausea) and 22% of patients had treatment-related adverse events which led to discontinuation of therapy. Anecdotally, there have been reports of many patients who did not complete all four cycles of ipilimumab who have had a durable response, and it is unknown what the optimal duration of nivolumab maintenance is to sustain disease control.  It is also unknown what the response rate to single-agent nivolumab is for treatment naïve patients with metastatic renal cell carcinoma (mRCC). OMNIVORE and HCRN GU16-260 seeks to help answer some of these questions with a phase II response adaptive trial.


The study schema of OMNIVORE is shown below: 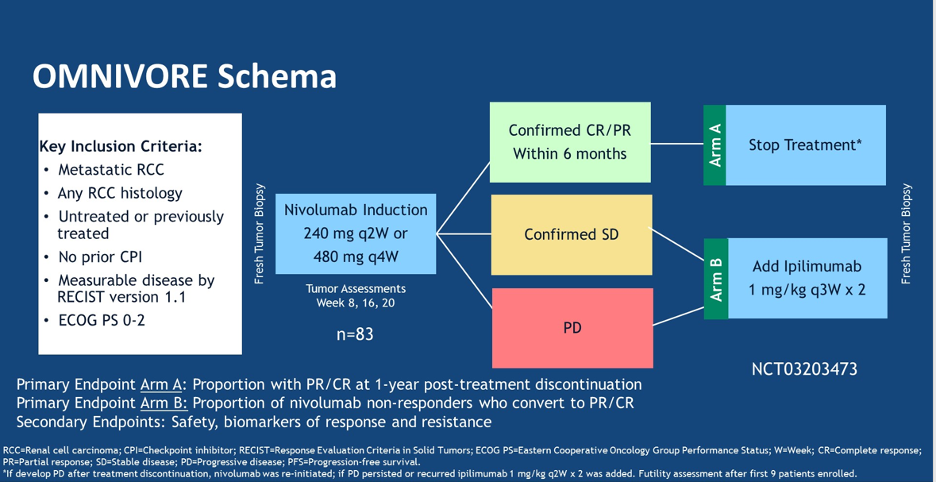 In brief, patients were started with single-agent nivolumab and an initial response assessment was completed at 8 weeks. If the patients had an objective response, and a persistent response confirmed 8 weeks after the first scan, they could stop treatment. If patients had stable disease or progressive disease at the first scan, ipilimumab was added to their treatment regimen for two cycles followed by an assessment. The primary endpoint of the study was the proportion of patients with a PR or CR at 1 year after Nivolumab discontinuation as well as the proportion of nivolumab non-responders who converted to PR/CR after adding ipilimumab. 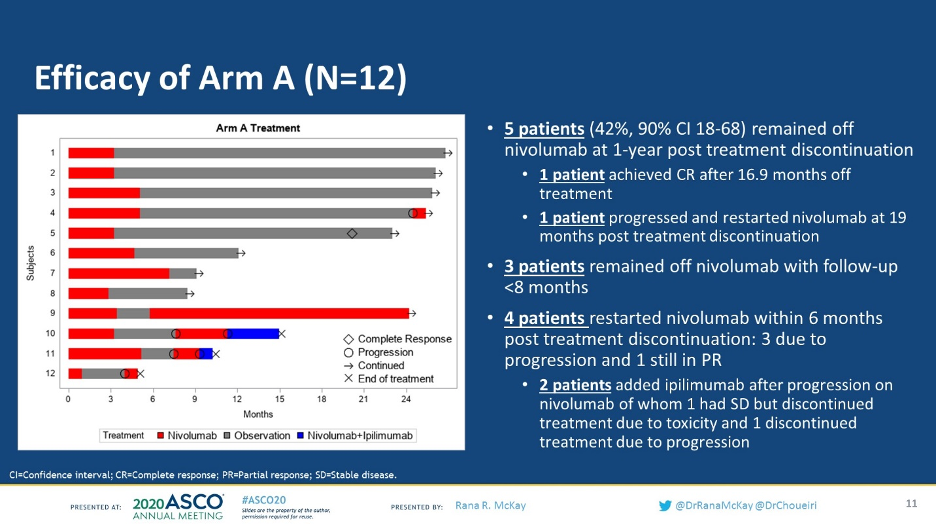 Of the 57 patients who had either stable disease or progressive disease on nivolumab, only 2 patients converted (4%) to a partial response with the addition of ipilimumab and there were no complete responders. 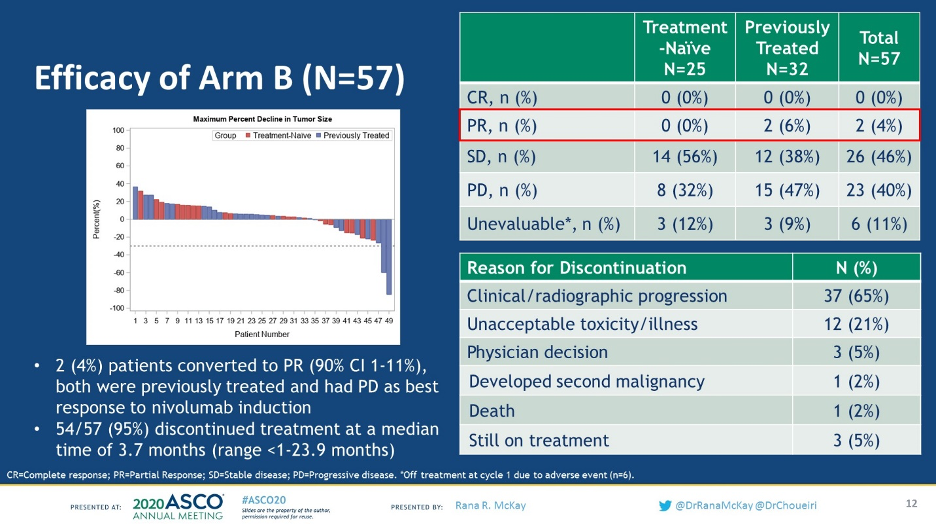 In terms of treatment toxicity, 7% of patients had grade 3 or 4 toxicity with single-agent nivolumab, compared with 23% of patients with both nivolumab and ipilimumab. 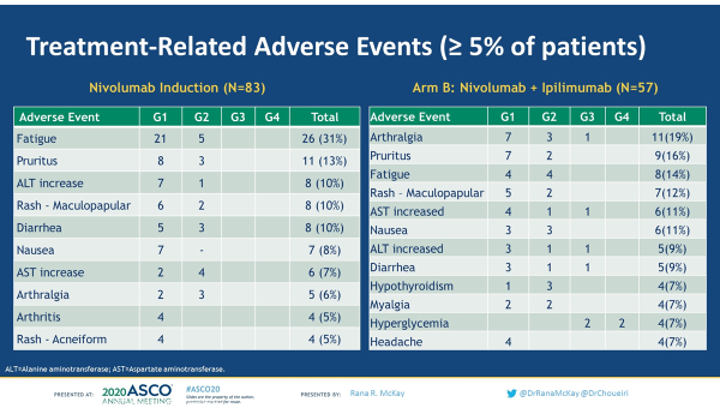 The authors of OMNIVORE concluded that based on the low conversion rate of nivolumab non-responders to PR/CR (4%), the strategy of single-agent nivolumab followed by response-based ipilimumab cannot be recommended at this time. This study provides valuable data which shows that while there may be select patients who may achieve an objective durable response with single-agent nivolumab, we are currently unable to predict who those patients are and we cannot recommend early discontinuation of nivolumab in responders in the absence of toxicity.

HCRN GU16-260 is similar study to OMNIVORE and seeks to answer the about the efficacy of single-agent nivolumab in the untreated setting as well as whether or not adding ipilimumab is effective in salvaging patients who progress on nivolumab. The study design is shown below. 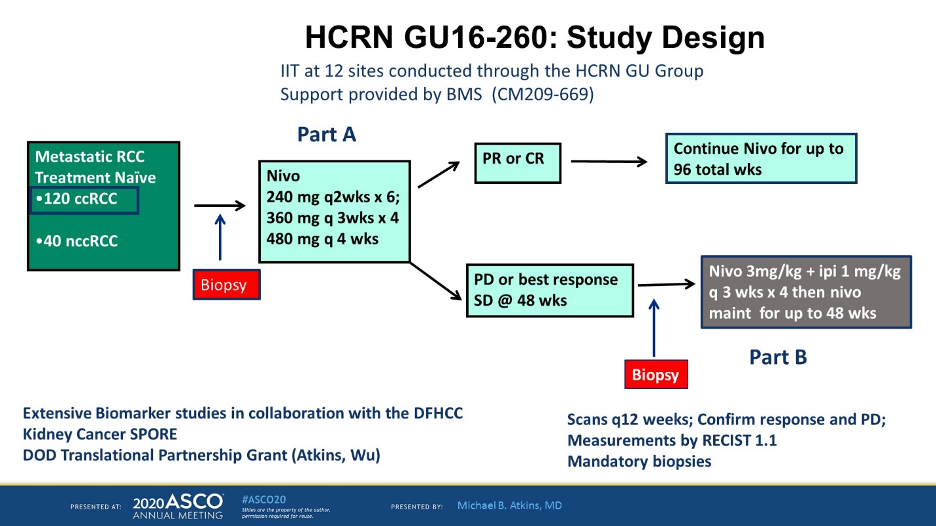 This presentation describes the patients in a clear cell population. For Part A of the study, all patients were given nivolumab per the schema above and for patients who had a PR or CR, nivolumab was continued for a total of 96 weeks. For patients who had SD or PD at 48 weeks, ipilimumab 1 mg/kg was added to nivolumab 3 mg/kg every 3 weeks for 4 cycles and then nivolumab maintenance was given for up to 48 weeks. 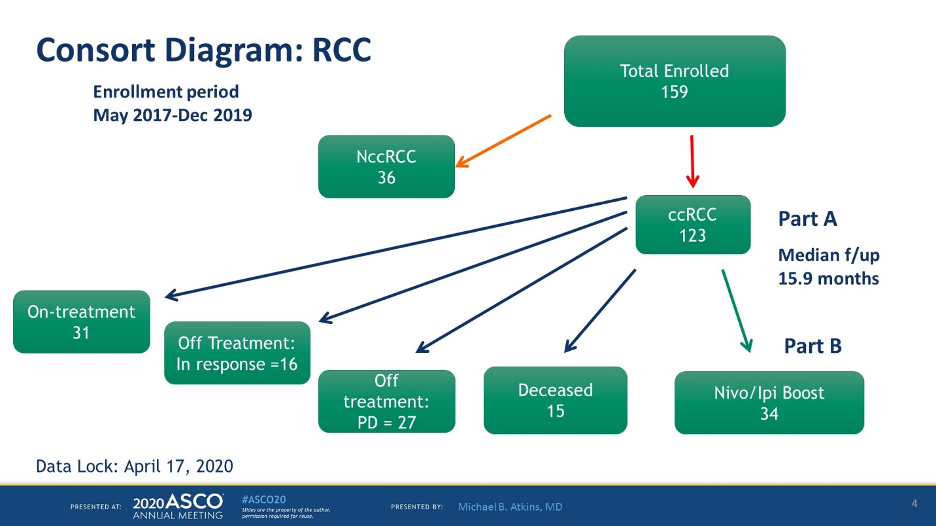 159 patients have been enrolled, 123 had clear cell kidney cancer. Of these patients, 31 continue on treatment, 16 are off treatment but with a response, and 34 have gone on to part B of the study. 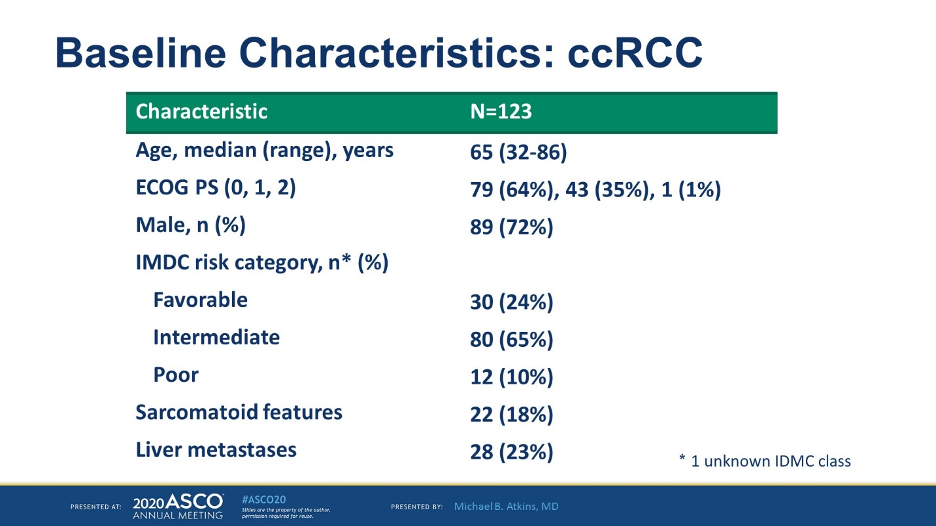 In terms of baseline characteristics, the median age was 65, and the majority of patients were IMDC favorable or poor risk. 18% had sarcomatoid features and 23% had liver metastases. 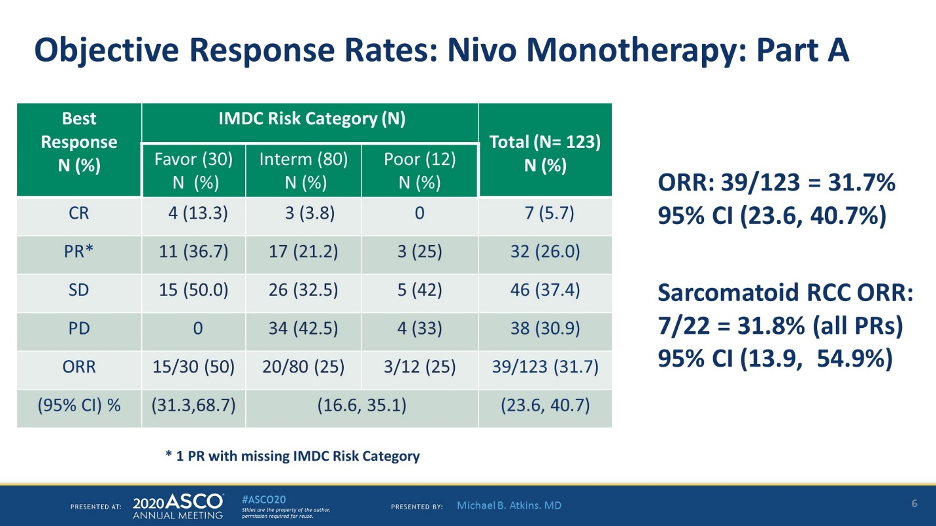 ORR for IMDC favorable risk was 50%, compared with 25% for intermediate/poor, and 31.7% for sarcomatoid tumors. 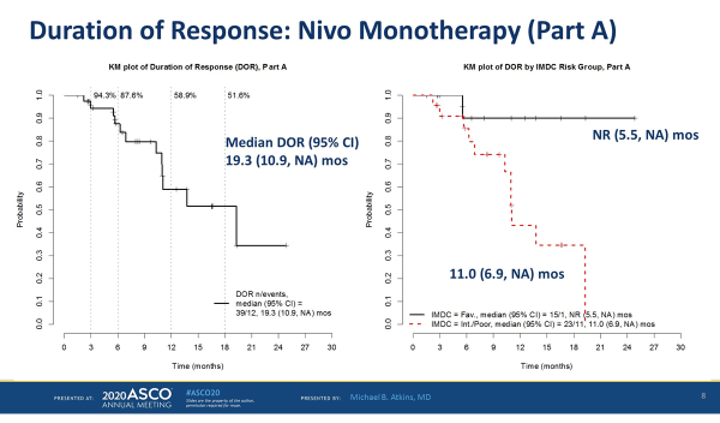 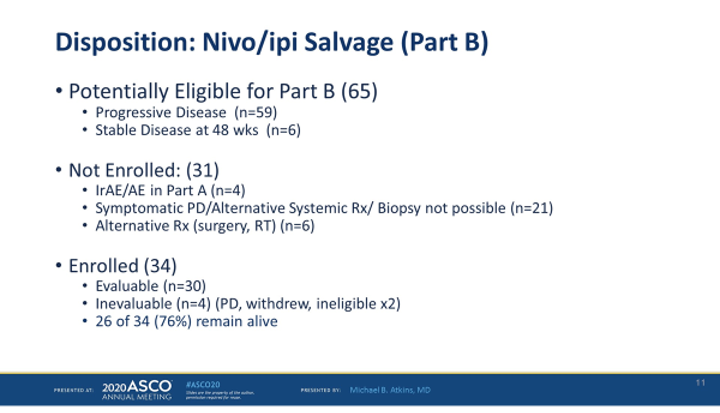 Of the 34 patients who were able to proceed with salvage ipi/nivo, the ORR by irRECIST was 13.3%, all of which were PRs. In terms of safety, 40% of patients had grade 3 or higher toxicity and 7/12 patients had elevated lipase.

For treatment naïve patients with mRCC, single-agent nivolumab is able to achieve objective responses in all IMDC risk groups but had the highest response for favorable-risk patients. Sarcomatoid patients had a 27.3% response rate, which is lower than the response rates seen with combination ipi/nivo (ORR as high as 56% in the post-hoc analysis of Checkmate 214). One important point here is that half of the patients did not make it to salvage ipilimumab after progression on single-agent nivolumab, which may argue that we should be using all of our available therapies (either combination IO/IO or IO/TKI) in the frontline rather than waiting for salvage therapy, as not all patients may be fit for second-line therapy. However, for patients who are ipilimumab or TKI averse, single-agent nivolumab represents an effective treatment, especially for IMDC favorable-risk patients.