Chicago, IL (UroToday.com) The presentation of ENZAMET, overall survival (OS) results of a phase III randomized trial of standard-of-care therapy with or without enzalutamide for metastatic hormone-sensitive prostate cancer (mHSPC): ENZAMET (ANZUP 1304), an ANZUP-led international cooperative group trial, by Christopher Sweeney, MBBS, was followed by Tanya B. Dorff, MD, of City of Hope Cancer Center, who provided a discussion of this highly anticipated phase 3 trial demonstrating an OS benefit for enzalutamide vs non-steroidal anti-androgen among men with mHSPC. Following Dr. Sweeney’s presentation, ENZAMET was immediately published in the New England Journal of Medicine.1

Dr. Dorff notes that the Revolution in Prostate Cancer Therapy began in 2015 – before CHAARTED was published2 we “saved arrows in our quiver:” SWOG9916 and TAX327 found that docetaxel prolonged median survival ~2 months in mCRPC. In CHAARTED, up front docetaxel increased median OS by 13.6 months, which was simultaneously confirmed in STAMPEDE.3 It became evident that hitting prostate cancer hard and early was critical to long-term control.

Dr. Dorff notes that with the reporting of ENZAMET, the Revolution is now validated. Enzalutamide previously improved survival in mCRPC with a hazard ratio (HR) of 0.63 post-docetaxel (AFFIRM)8, and HR 0.71 in the pre-docetaxel setting (PREVAIL).9 Furthermore, enzalutamide delayed metastasis by a median 22 months in non-metastatic CRPC (PROSPER).10 ENZAMET showed a 3-year OS increase from 72% to 79% and a HR for OS of 0.67 (95%CI 0.52-0.86). 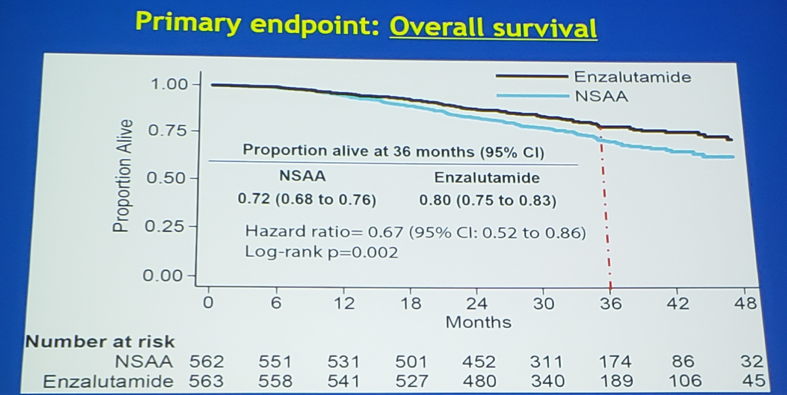 Dr. Dorff poses the question, Why not combine (sequence) chemotherapy and androgen receptor targeted therapy in mHSPC? Interestingly, there was less benefit seen in patients treated with docetaxel up-front in ENZAMET, and no study has shown the synergy of AR-targeted therapy plus docetaxel, although the combination of full doses is safe. Second, there is less benefit seen in high volume patients, as 70% received docetaxel whereas <40% of low volume patients received docetaxel. Finally, dedicated trials will answer whether there is an advantage to using both (ie. ARAMIS with darolutamide, PEACE1 with abiraterone).

Several other considerations are important, as noted by Dr. Dorff. When ENZAMET was assessed by the ASCO Net Health Benefit it scored 33; a Net Health Benefit score of ≥46 is defined as substantial, whereas a value ≤41 is defined as low value. Interestingly, ENZAMET scored similarly to other mHSPC studies. Second, no biomarkers are currently available to select mHSPC patients for abiraterone vs enzalutamide vs docetaxel. AR-V7 shows some promise in selecting between AR-targeted therapy and docetaxel in mCRPC, but does not differentiate likelihood of response with abiraterone vs enzalutamide; AR-V7 is rarely present in mHSPC. Third, novel circulating tumor cell biomarkers may be of interest in that CTC heterogeneity is associated with shorter duration of response with AR-targeted therapy. But whether CTC heterogeneity is commonly present in mHSPC is still to be fully determined. Additional questions that remain to be answered and are currently under investigation include (i) Should we treat the primary? (ii) Should we use metastasis-directed therapy (ie. SBRT)? (iii) Is continuous therapy still necessary?

Dr. Dorff concluded this discussion of ENZAMET with several remarks: