Chicago, IL (UroToday.com) As background for this particular study, insulin-like growth factor receptor-1 (IGF-1R) signaling activates the PI3K/AKT pathway. This may lead to androgen receptor (AR) transactivation and progression to hormonal treatment resistance. Xentuzumab (Xe), an IGF-ligand-neutralizing monoclonal antibody, that binds to IGF-1 and IGF-2 and inhibits IGF-1R signaling. As such, it may enable re-sensitization to therapies that target the androgen receptor. This is seen in the diagram below:

Enzalutamide (Enza), as an androgen-receptor axis targeted therapy, has known efficacy in the treatment of metastatic castration-resistant prostate cancer (mCRPC). Approved along with doxetaxel and abiraterone, it is often sequenced with these agents for the management of mCRPC patients.

In this multi-center randomized phase II trial, the authors evaluated anti-tumor activity of Xe plus Enza in mCRPC who have progressed on both docetaxel and abiraterone. Men with histologically/cytologically confirmed mCRPC and progression after docetaxel and abiraterone were randomized to receive Xe 1000mg IV QW + Enza 160mg/day oral or Enza alone (28-day cycles until progression or intolerable adverse events [AEs]). The study design is seen below:

Overall, 43 patients were randomized per arm for a total of 86 patients. The table below summarizes the demographics: 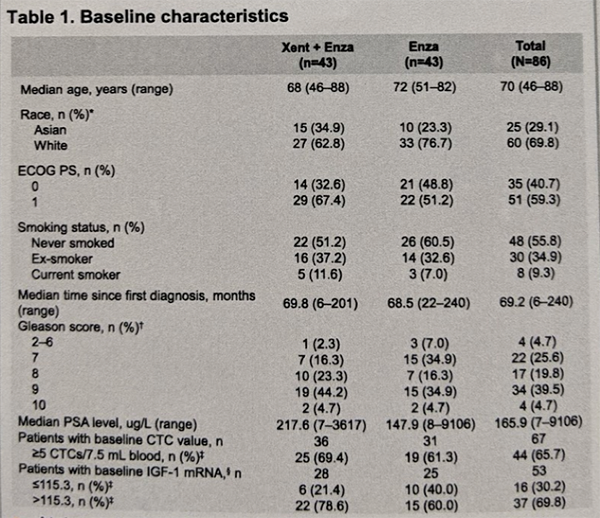 Overall survival data is immature and has not been reported.

Looking at PSA response, for the two arms, prostate-specific antigen (PSA) response rates were 21% and 19%; maximum decline in PSA: -20 v -9 μg/L. This is summarized below:

All of these were also not significantly different.

Time to PSA progression is seen in the KM curve below:

There was no significant difference between the two arms.

Based on this, the authors rightly conclude that the addition of Xe to Enza did not prolong PFS in mCRPC compared with Enza alone. There were no notable differences in PSA-related endpoints and CTC between arms.

However, it should be noted that these patients were very late in their treatment course and had already seen and failed both docetaxel and abiraterone. Hence, re-activating the AR sensitivity this late in the course may have doomed the study to failure. Perhaps in an earlier treatment time frame, different effects could have been seen.