As response rates are moderate at best, identifying alternative systemic therapies for patients that are not likely to benefit from ICI’s are critical.

FGFR3 alterations have been shown preclinically to be oncogenic drivers of bladder cancer. FGFR3 inhibitors are revolutionizing the clinical management of metastatic urothelial carcinoma in biomarker-selected and potentially poor immunoncology responding patients.  We know that 20% of patients with mUC harbor FGFR3 mutations or fusions (M/F), which may result in lower sensitivity to ICI. Targeting FGFR3, therefore, may be an important alternative option for patients that are likely not going to benefit from ICIs. Vofatamab (B-701, V) is a fully human monoclonal antibody against FGFR3 that blocks activation of both the wildtype and genetically activated receptor. A diagram and explanation of its mechanism is below:

As response rates are moderate at best, identifying alternative systemic therapies for patients that are not likely to benefit from ICI’s are critical.

This drug is being tested in combination with other established agents. FIERCE-21 was a phase 1b/2 study designed to evaluate vofatamab monotherapy and combination with docetaxel. The results of this study were presented by Dr. Necchi at GU ASCO 2019. The median progression-free survival (PFS) was not reached in the combination arm, and it was four months in the monotherapy arm. Vofatamab was shown to be well-tolerated and had no long-term safety issues, allowing patients to receive long term treatment.

In this abstract, the authors assessed a combination of V with Pembrolizumab (VP) in a Phase 1b/2 study. The study design is below:

They enrolled mUC patients with failure to ≥ 1 prior line of chemotherapy or recurrence ≤ 12 months of (neo)adjuvant chemotherapy, measurable disease and ECOG <2. Treatment consisted of V at 25 mg/kg alone for 2 weeks of monotherapy. This was then followed by combination with Pembrolizumab 200 mg every 3 weeks. During the V monotherapy window, paired tumor biopsy was obtained. 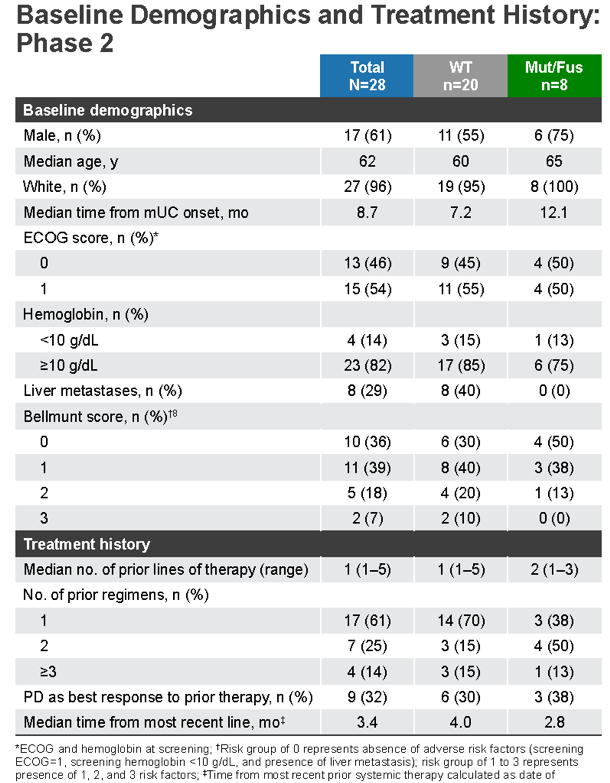 WT patients were unselected for PD-1 status. The cohort was predominately male (61%) white (96%), all had received at least 1 line of prior chemo and 64% had Bellmunt scores of ≥1.

At the time of the reporting, 7 (35%) of the WT and 2 (25%) of the mut/fus patients remained on treatment. The majority of patients received 8 doses of V.

When looking at safety, the safety profile is consistent with previously reported data for pembrolizumab. As indicated before, Vofatamab monotherapy is well tolerated. More of the adverse events came from the pembrolizumab. TEAE occurring in >20% of patients were nausea, anemia, diarrhea, and fatigue. AE profile is shown below: 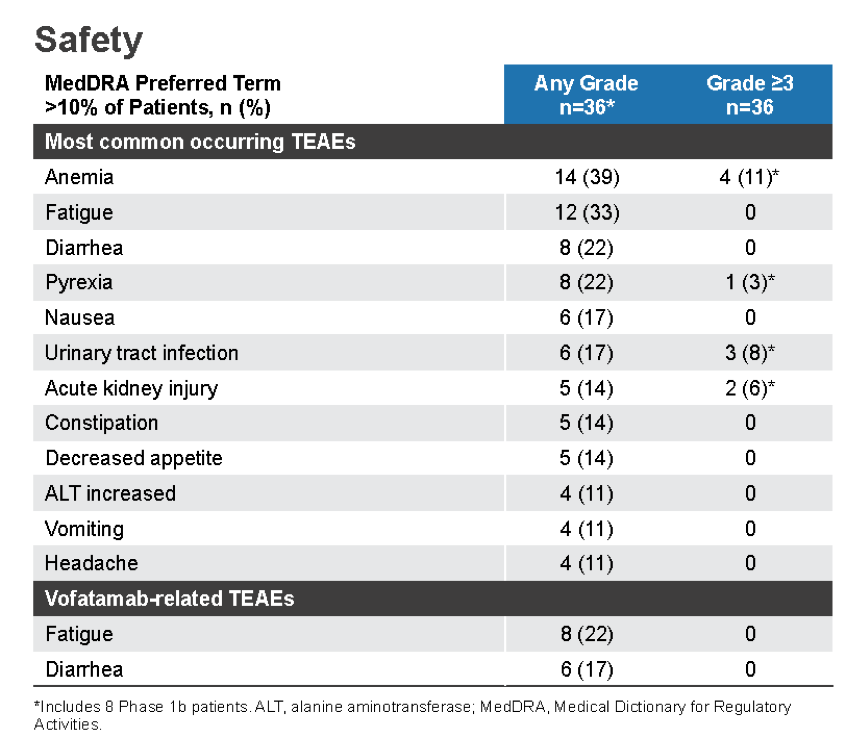 An interesting separate analysis, they looked at response related to the five established molecular subtypes and some important trends are noted:

As seen below, the responses were similar regardless of FGFR3 status: 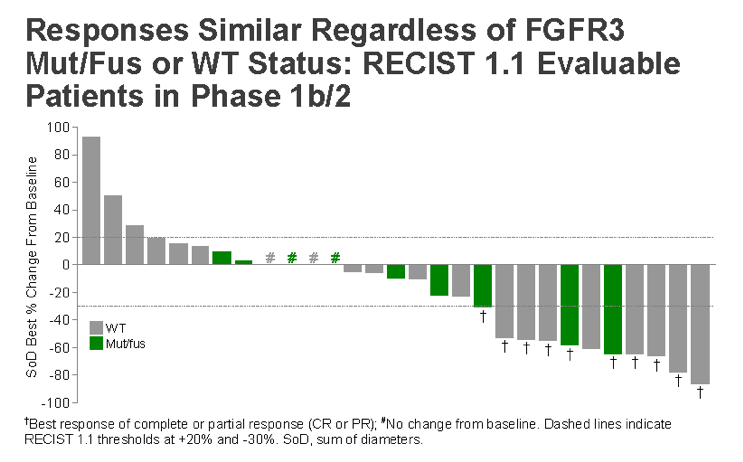 An interesting separate analysis, they looked at response related to the five established molecular subtypes and some important trends are noted: 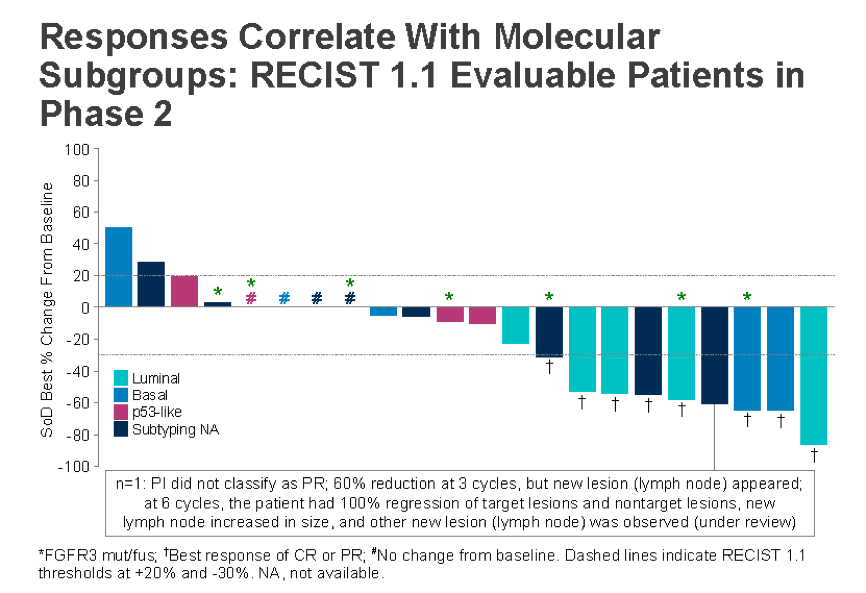 The best responses are in those patients with luminal or basal subtype, or patients with no subtyped identified. P53-like patients did not respond nearly as well. This is further seen below in the duration of response separated by molecular subtype: 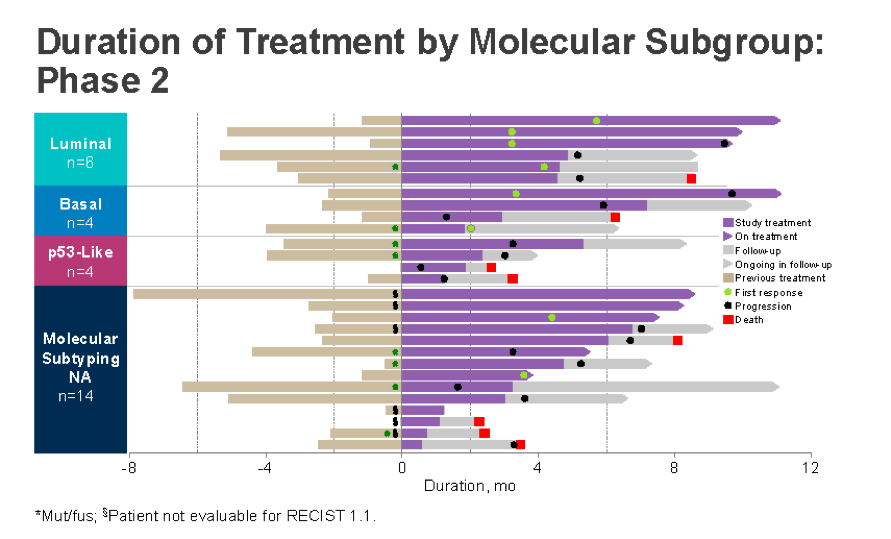 They did note that they were able to safely get paired biopsies before and after the V monotherapy. Below, they found that the lead in V monotherapy induced some important genomic changes:

Specifically in genes associated with an inflammatory response.

Based on data to date, the VP combination appears to be well tolerated with an encouraging ORR and prolonged PFS in the WT cohort – a response greater than one would anticipate from Pembrolizumab alone based upon historical data.