(UroToday.com) The first session of the Advanced Prostate Cancer Consensus Conference (APCCC) 2021 which was hosted virtually in the context of the COVID-19 pandemic focused on the management of patients with newly diagnosed metastatic hormone-sensitive prostate cancer. Previous presentations in this session have discussed a variety of treatment options for patients in this disease space: in addition to an androgen deprivation therapy (ADT) backbone, androgen receptor signaling inhibitors, taxane-based chemotherapy, and local prostate-directed therapy may be considered. Dr. Himisha Beltran concluded this session by discussing whether molecular markers can inform treatment decisions in this disease space.

In this context, she highlighted that clinical features may allow risk stratification and prognostication in mCSPC. These characteristics have been described in some detail in Dr. Christopher Sweeney’s talk in this session but include de novo (synchronous) versus metachronous metastatic disease and the burden of disease. Dr. Beltran suggested that differences in clinical presentation are likely driven by underlying biologic differences. However, alternatively, these differences may reflect the capture of patients later in their disease trajectory.

Highlighting the landscape of genomic alterations in mCSPC, Dr. Beltran emphasized that there is a wide variation in the prevalence of these events, ranging from very rare alterations in the androgen receptor up to nearly half of patients with TMPRSS2-ERG alterations.

She further highlighted that there is still work in progress to identify the mutational landscape underpinning clinical features. However, next-generation sequencing has identified that TP53 mutations, DNA double-strand breaks, pre-metastasis PSA, and de novo metastatic disease are associated with a higher burden of disease.

Highlighting data from genomic profiling efforts from the STAMPEDE trial and from Memorial Sloan Kettering, Dr. Beltran emphasized that there are profiles associated with disease volume, including aberrant DDR, Wnt pathway alterations, chromatic remodeling, copy number alterations, NOTCH alterations, and epigenetic modifications. In contrast, TP53 and ETS fusions were more frequent in patients with low-volume disease. Summarizing these data, she suggested that there was “no real smoking gun”.

Dr. Beltran then considered the question of early (eg. TMPRSS2-ERG and SPOP) versus late events given implications for tissue testing and the assessment of developed resistance. Many alterations (eg. RB1, TP53, PTEN) may be either early or acquired. To further explore this, Dr. Beltran highlighted ongoing working using a neoadjuvant model based on the PUNCH CALBG 90203 trial. Both DNA seq and gene expression-based analyses have shown that neoadjuvant therapy may enrich for some gene alterations. One example of this is the enrichment of p53 which can be enriched post-therapy. 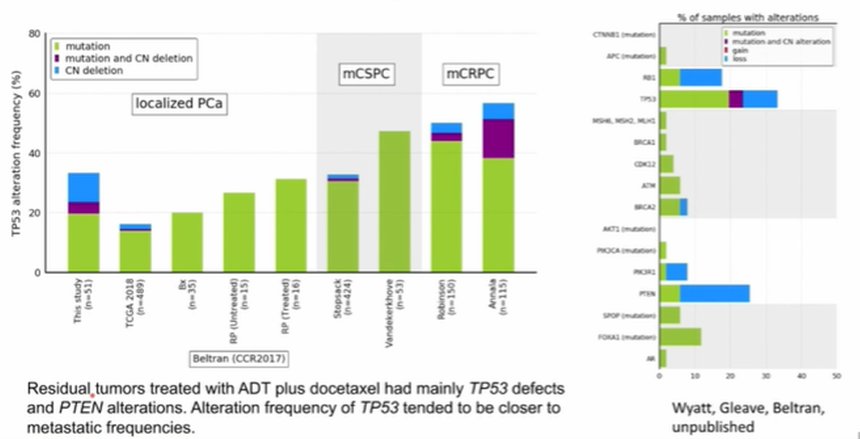 Dr. Beltran then considered the question of how genomic alterations may affect therapy response and prognosis. Prognostically, she emphasized that loss of tumor suppressors is associated with worse prognosis with a cumulative effect of multiple alterations. In contrast, SPOP mutations are associated with improved prognosis, and a better response to androgen-receptor pathway inhibitors.

Considering the question of compound alterations of TP53, PETN, and RB1, Dr. Beltran emphasized that loss of these tumor suppressors is more common in patients with more advanced disease. Further, loss of these is associated with a worse prognosis within any given disease state.

She highlighted that TP53 loss may occur through either mutation and deletion and may affect DNA-damage response, cell-cycle arrest, and apoptosis. The combined inactivation of TP53 and PTEN is associated with resistance to abiraterone as well as neuroendocrine differentiation while the combined loss of TP53 and RB1 is associated with androgen-receptor independence and lineage plasticity.

While TP53 and PTEN are often early events which may be selected for, RB1 alterations are often acquired as a result of therapy and are associated with therapeutic resistance. Complete RB1 loss is relatively rare (3% of patients with mCSPC by immunohistochemistry). However, functional loss may be more common and may be as a result of methylation, phosphorylation, or other mechanisms.

Dr. Beltran then focused on SPOP mutations. These are enriched earlier in the disease process: 8-10% among patients with localized disease, ~5% in those with mCSPC, and <5% in those with mCRPC. Further, within mCSPC, SPOP mutations are associated with improved prognosis and response to androgen-receptor targeting therapies. She then suggested that SPOP may be used as a biomarker to select patients for potent androgen-receptor targeting.

Moving from specific mutations to how we may test for them, Dr. Beltran considered the detection of molecular aberrations in the primary tumor, in a metastatic biopsy, and in circulating tumor DNA (ctDNA). Each of these is associated with specific technical and interpretative considerations. In particular, compared to mCRPC, many patients with mCSPC have a lower volume of disease which may make metastatic biopsy more difficult and reduce the yield of ctDNA testing.

She then discussed gene expression profiling which may offer an alternative approach to prognostication. There are many approaches to performing this including assessment of luminal/basal signatures (PAM50), the Decipher score, Rb functional signatures, AR signaling scores, immune signatures, and others. These have been assessed in secondary analyses of many trials and cohorts including CHAARTED, SPARTAN, and the SU2C/PCF Dream Team. Taken together, the available data suggested that patients with a luminal profile tend to do better, however, there are many ongoing efforts that will better define the utility of this approach. She did note that based on available data, we already need to think about how to target patients with basal subtype signatures given their poorer prognosis.

Dr. Beltran then briefly discussed the PSMA in mCSPC, emphasizing that the biomarker implications of PSMA remain unclear to date. There is an ongoing need to define biology based on PSMA PET-CT characteristics, as well as define its role in treatment response monitoring.

In conclusion, Dr. Beltran highlighted that this is a rapidly moving and evolving field. Certainly, it is clear that loss of tumor suppressors is associated with resistance to androgen receptor targeting therapies. However, the context may influence the clinical utility of these data though she suggested that potentially this information may be useful to select patients for chemotherapy intensification using triplet therapy. In contrast to tumor suppressors, SPOP mutations are associated with sensitivity to androgen receptor targeting agents. Additionally, there are a number of emerging predictive biomarkers being used in mCRPC and Dr. Beltran suggested that these may be used earlier in the disease space.

Moving forward, she suggested that gene expression profiling and molecular imaging may help guide biologic stratification. Currently, a number of biomarkers are being incorporated into trials in both high-risk localized disease and mCSPC. Integration of these data and studies will be critical to informing practice.