(UroToday.com) In a moderated poster presentation at the 2022 American Urologic Association Annual Meeting held in New Orleans and virtually, Dr. Robesti discussed the prognostic value of pre-operative 68-Ga prostate-specific membrane antigen (PSMA) PET among patients who are found to have lymph node invasion at the time of surgery. This work is premised on the idea that 68-Ga PSMA PET may identify nodal involvement preoperatively. Early identification of those with nodal involvement may be important to identify patients for early multi-modal treatment intensification.

To assess this, the authors identified 92 patients who underwent pre-operative 68Ga-PSMA PET/CT prior RP and extended lymph node dissection (LND) between 2019 and 2021 at two centers. They assessed the outcome of PSA persistence, defined as first PSA value after surgery ≥0.1 ng/ml. Further, they examined rates of true and false positive of PSMA PET/CT in detecting positive nodes at final pathology. Logistic regression models were used to assess the association between the preoperative PSMA PET/CT result and nodal status at final pathology on the risk of PSA persistence.

Pre-operatively, at the time of PSMA-PET/CT, the median PSA was 9 ng/ml (IQR: 5-16 ng/ml). Overall, 30 (33%) patients had a positive preoperative PSMA-PET/CT. Among these 30 patients, 19 had evidence of nodal disease on pathology. Conversely, 13 of the patients had a negative scan but positive nodes at pathology. 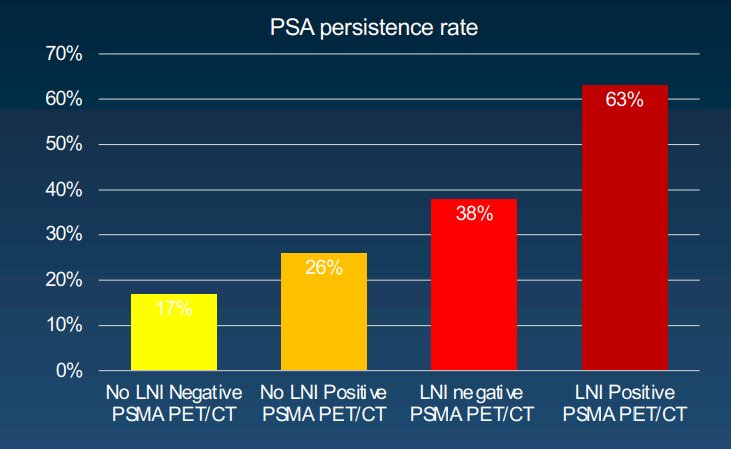 Thus, the authors conclude that both preoperative 68Ga-PSMA PET/CT and surgical pathology have important prognostic implications for patients treated with RP and LND.