(UroToday.com) In a podium presentation at the 2022 Society of Urologic Oncology Meeting held in conjunction with the American Urologic Association Annual Meeting held in New Orleans and virtually, Dr. Daniel Lin presented on de-intensifying active surveillance in prostate cancer.

He then contrasted these NCCN guidelines with guidance from the AUA and ASCO. The 2022 localized prostate cancer guidelines from the AUA recommend active surveillance as the preferred management options for patients with low risk prostate cancer, invoking a strong recommendation based on Grade A evidence. ASCO notes that this treatment approach should be adopted for any patients with low-risk or favourable intermediate-risk with a low proportion of pattern 4 and age 75 years or greater.

Once patients begin active surveillance, approaches differ. Dr. Lin highlighted 6 of many differing active surveillance monitoring plans. While there are similarities between these, they also differ in terms of the frequency or intensity of PSA monitoring and the interval for repeat biopsy. 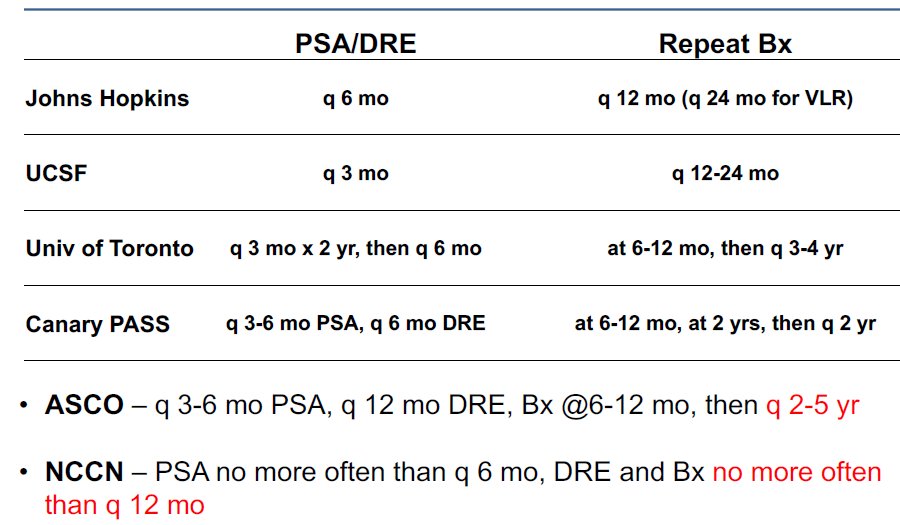 There are patients who progress early during the surveillance period and early identification of these men with provision of timely curative intent treatment is critical. However, there remains a substantial proportion of men in the plateau of an “ideal” Kaplan Meier curve who are unlikely to progress to active treatment over time and thus may benefit from de-intensification of surveillance to reduce the burden of the regime.

Across numerous active surveillance cohorts including Johns Hopkins, UCSF, the University of Toronto, and Canary PASS, consistently, PSA density and the number of positive cores are associated with the likelihood of progression. These provide surrogate measures of tumor volume. Further, work from the Canary PASS cohort, as published in European Urology, highlighted that there are particularly favourable outcomes for patients who have no evidence of cancer on their surveillance biopsy. When this was examined in a meta-analysis involving 2628 patients in 9 studies, a negative surveillance biopsy was noted in 20 to 30% of men and was associated with an approximate 50% decreased risk of future reclassification. These men may be most suitable for de-intensification.

Moving to a discussion of trials comparing surgery and watchful waiting, he noted that patient age has important implications for the potential of patients to benefit from active intervention. Thus, we need to consider when to transition from active surveillance to a watchful waiting approach with de-intensified regimes. Comparing these treatment approaches, Dr. Lin highlighted work from Dr. Loeb showing an incremental benefit of surveillance over watchful waiting in men at ages 40 and 50 than declines when men reach 65 or 70 years of age. Considering the guidelines, ASCO’s endorsement of the Cancer Care Ontario surveillance guidelines recommends transitioning to watchful weighting when life expectancy is less than 5 years. In the NCCN guidelines and EAU guidelines, watchful weighting or observation is recommended when life expectancy is less than 10 years.

Considering how we may do surveillance better, he highlighted the role of magnetic resonance imaging (MRI). He noted two major issues. First, he discussed substantial interobserver variability which is notably worse among inexperienced readers (kappa 0.15-0.39) than among experienced readers (kappa 0.41-0.61). Additionally, MRI has significant issues with the sensitivity of detecting clinically significant disease at progression. The negative predictive value at “premier MRI centers” is only 70 to 85%. He further noted data from the ASIST trial which showed no difference in upgrading between patients undergoing a standard systematic biopsy or an MRI with targeted and systematic biopsy for patients on active surveillance. This trial further highlighted significant differences between study sites, emphasizing the heterogeneity of this modality. He further presented data from the PRIAS study which noted again no difference in upgrading rates between patients diagnosed with upfront MRI compared to those with no upfront MRI, concluding that “confirmatory biopsy cannot (yet) be omitted in patients diagnosed with upfront MRI”. However, combinations of MRI and PSA density may be useful. Thus, it is not surprising that ASCO’s endorsement of the Cancer Care Ontario surveillance guidelines recommends that “mpMRI should not be used as a replacement for surveillance biopsy” with similar guidance coming from the 2022 AUA guideline on clinically localized prostate cancer.

Dr. Lin then moved to address whether biomarkers may be useful in guiding the intensity of active surveillance. Again highlighting work from the Canary PASS cohort, he noted that while the 17-gene Genomic Prostate Score (GPS) was not significantly associated with the risk of grade progression, PSA density, proportion of positive cores, and year of diagnosis were. However, work from the USCF group did demonstrate that genomic scores, in addition to PSA density and proportion of positive cores, were predictive of reclassification. In this cohort and PI-RADs score was not associated with reclassification.

The 2019 ASCO Guideline on Molecular Biomarkers in Localized Prostate Cancer, as Dr. Lin highlighted, state that these assays are “not recommended for routine use” but may be considered in circumstances in which the results, when considered with routine clinical factors are likely to affect the clinical decision making. Dr. Lin emphasized that this may be the case in patients with high-volume grade group 1 disease, patients with grade group 1 disease and an abnormal DRE or high PSA density, or those with low volume grade group 2 disease. Reflecting this, the recent AUA guidelines suggest that clinicians may “selective use” tissue-based biomarkers when added risk stratification may alter decision making but “should not routinely use” them.

Moving forward, Dr. Lin highlighted the potential of multinomial risk calculators (including Movember GAP3 and Canary PASS) which provide the risk of upgrading and thresholds for re-biopsy. Further, additional emerging biomarkers including polygenic risk scores and the use of artificial intelligence in pathology may proven influential. Finally, there may be a role for focal therapy of “index tumors” though this still has many limitations.

In closing, he emphasized that clinical factors including PSA density, number of cores of cancer, and a negative surveillance biopsy may guide decisions for de-intensification of surveillance. Further, we should consider a transition to watchful weighting in patients with shorter life expectancies. In high view, to date, MRI and biomarkers have limited routine benefit in surveillance though there are emerging platforms, biomarkers, and ablative approaches under investigation that may prove fruitful.