(UroToday.com) The 2022 American Urological Association (AUA) Annual Meeting included the Society of Urologic Oncology (SUO) session and a presentation by Dr. Viraj Master discussing whether everyone should receive adjuvant therapy after resection of high-risk renal cell carcinoma (RCC). Dr. Master started his presentation by noting that the perfect adjuvant therapy would be inexpensive, easy to tolerate, active in microscopic disease, and would provide good outcomes. Until recently, the adjuvant therapy for high-risk kidney cancer has been a barren landscape, as evidenced by the following TKI trials: 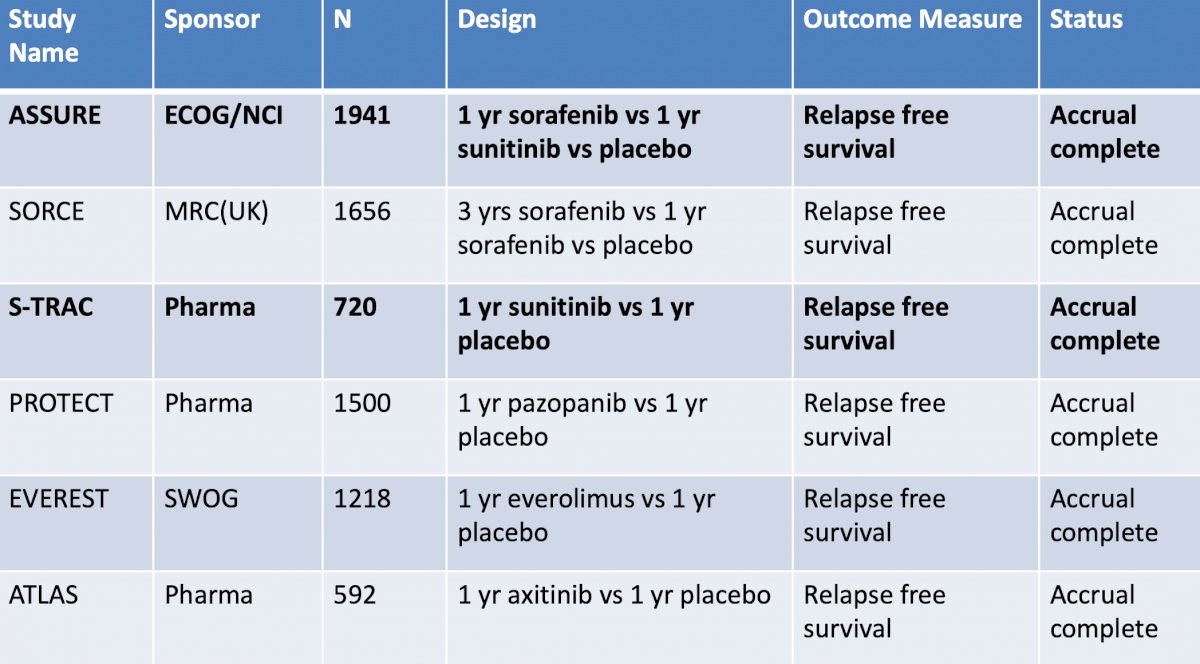 Even in an updated analysis among high-risk patients, there was no difference in disease-free survival or overall survival. Subsequently, the S-TRAC trial showed that adjuvant sunitinib prolonged disease-free survival versus placebo in patients with loco-regional RCC at high risk of recurrence after nephrectomy (HR 0.76, 95% CI 0.59-0.98, p = 0.03): 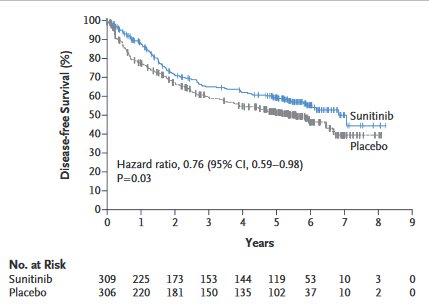 However, Dr. Master emphasized that they do not use adjuvant sunitinib at Emory University. A subsequent pooled analysis of the ASSURE (n = 1943), S-TRAC (n = 615), and PROTECT (n = 1135)3 trials showed again that VEGF TKI was not associated with improved DFS (HR 0.92, 95% CI 0.83-1.03)4. Additionally, adjuvant VEGF TKI was associated with higher grade 3-4 adverse events (OR 5.89, p < 0.001). So, perhaps adjuvant immunotherapy trials are to the rescue? Dr. Master highlighted that several trials are accruing, completed accrual, and published:

Dr. Master notes that on April 26, 2022, there was an update on the PROSPER trial, which is a phase 3 trial testing adjuvant nivolumab, stating that “the addition of perioperative nivolumab does not appear to improve RFS compared to standard of care surgery alone for patients with clinical stage T2 and higher primary kidney cancer.”

Dr. Master then discussed the one published adjuvant immunotherapy trial, KEYNOTE-5645. This trial was a phase III multicenter trial of pembrolizumab versus placebo in patients with histologically confirmed ccRCC. Risk groups were defined as follows:

The trial schema for KEYNOTE-564 is as follows:

The key figure from this trial according to Dr. Master is DFS by investigator in the intention to treat population:

In the melanoma literature, adjuvant pembrolizumab works, but Dr. Master notes that it took 10 years of follow-up to see a difference in survival. All of a sudden at the Emory tumor boards, it seemed that every patient was getting referred for adjuvant pembrolizumab. As such, it is important to dig into the details of this trial. Referring back to the Kaplan-Meier curve for DFS by investigator in the intention to treat population, Dr. Master highlighted that at 36 months of follow-up the two curves collapse. As urologists, Dr. Master notes that we know that the vast majority of recurrences occur during the 2-3 years post-operatively. Thus, this therapy with this particular cohort of patients does not really show a benefit during the entirety of the time window we would expect to see recurrences. Looking closer at the patients included in the trial, Dr. Master notes that 34.6% of patients were low grade (1 or 2):

On further analysis of the subgroups, Dr. Master highlights that region is quite interesting, specifically the European Union demonstrating a significant benefit (HR 0.49, 95% CI 0.32-0.74). Interestingly, the strongest DFS signal was seen among 26 patients in the pembrolizumab arm who are M1 NED either synchronously or metachronously (HR 0.29, 95% CI 0.12-0.69): 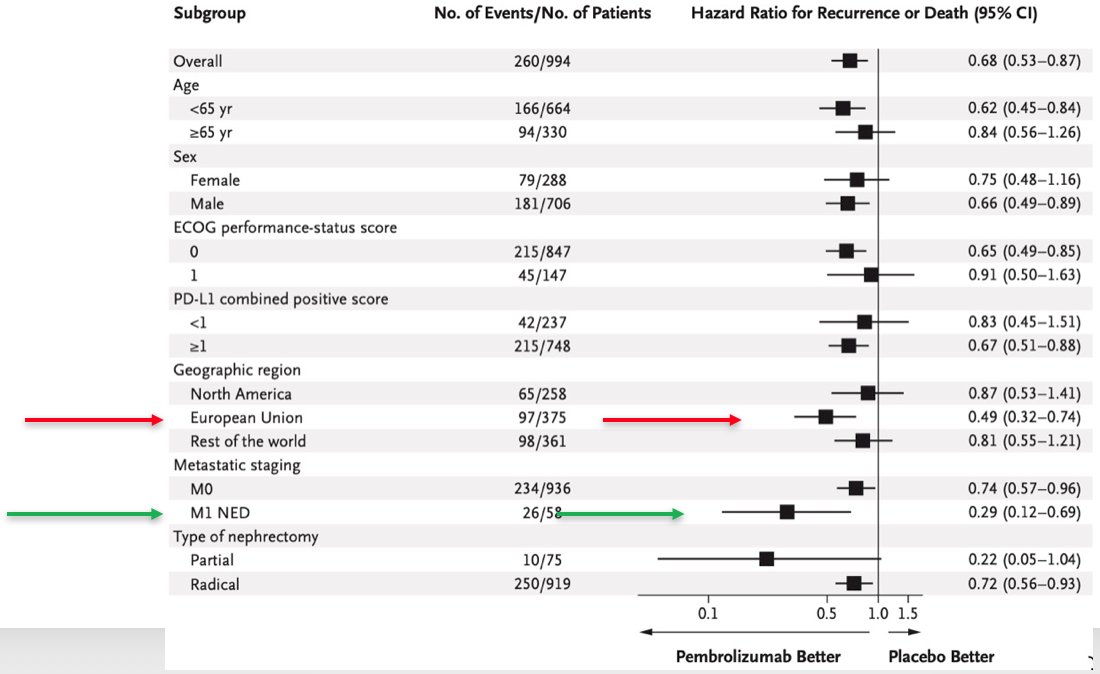 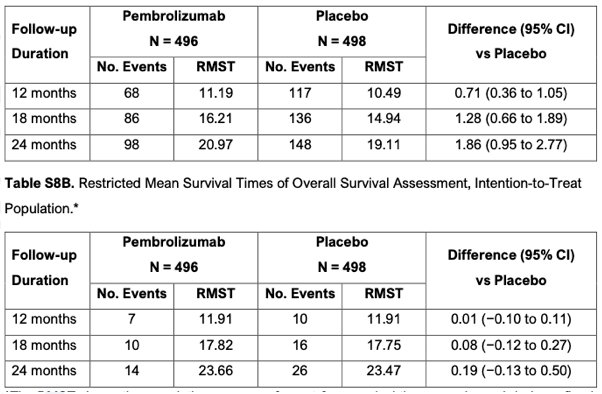 Regarding the cost of therapy, recent data was presented at GU ASCO 2022. This data showed that adjuvant RCC costs more than $100,000/patient and that adjuvant pembrolizumab was not cost-effect for all trial patients at a population level at 5 years after treatment. However, adjuvant pembrolizumab was found to be cost-effective in a subset of high-risk patients at 5 years. So, who are the patients that are developing recurrence and should receive immunotherapy? Looking at data from Leibovich et al.5, they assessed 3,633 patients with nonmetastatic clear cell RCC, papillary RCC, and chromophobe RCC, developing prognostic models for progression-free (PFS) and cancer-specific survival (CSS). Specific to clear cell RCC, the c-index for PFS was 0.83 and for CSS was 0.86. Based on the risk score model, Dr. Master says somewhere around 8-9 points may make sense to consider treating patients with adjuvant therapy: 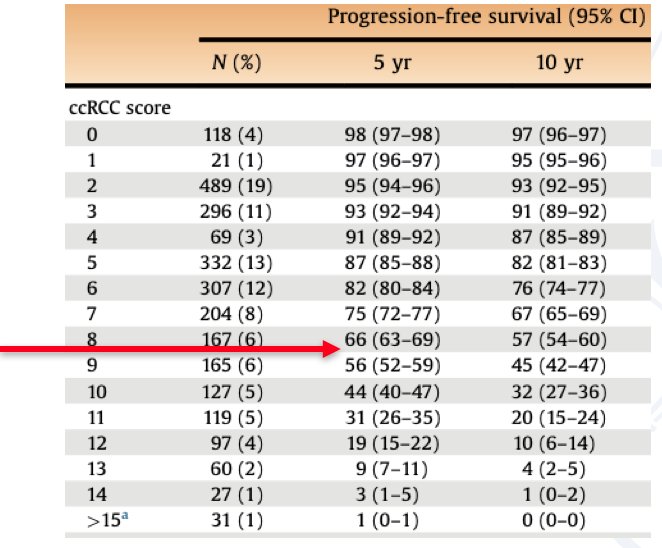 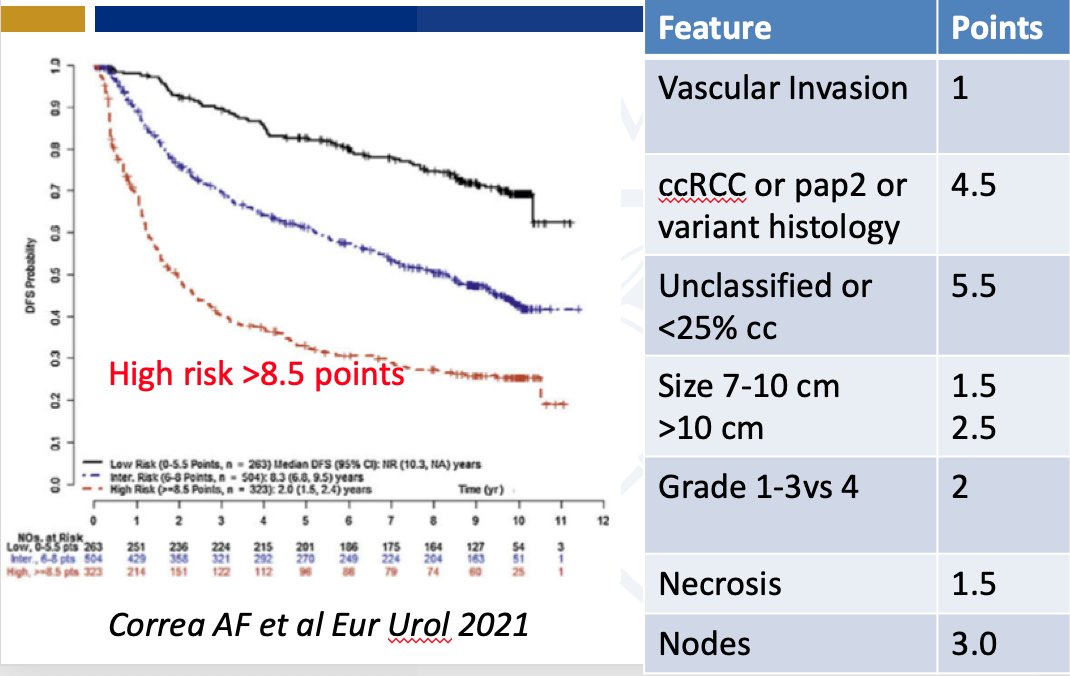 Based on the following table, Dr. Master notes that if you were to simply look at the numbers, among 86% in the total cohort, using the ASSURE DFS nomogram, 96% of the T2G4 patients would not be predicted to recur:

Furthermore, even the pT3 patients (assuming grade 3), only 80% of those patients were destined to have a recurrence. Thus, patients with T3/T4 or N+ tumors, or certainly the M1 NED patients would be those that may benefit from adjuvant pembrolizumab.

Dr. Master concluded his presentation by discussing whether everyone should receive adjuvant therapy after resection of high-risk RCC with the following summary points: