When assessing the NMIBC patient, Dr. Downs notes that it is important to define the adequacy of BCG treatment, remember the importance of a quality TURBT in NMIBC treatment, highlight the importance of prostatic urethra sampling, and schedule monitoring of the upper tracts. The panel then proceeded to discuss 5 key cases regarding patients with NMIBC.

This patient was a 59-year-old attorney that underwent gemcitabine + docetaxel for persistent CIS following two induction courses of BCG. Six months later he had a positive cytology and re-re-evaluation revealed CIS of the prostatic urethra. Dr. Lerner notes that given this patients BCG unresponsive disease, in addition to new CIS in the prostatic urethra, this patient has potentially aggressive disease and he would thus recommend radical cystectomy. This patient did elect for a radical cystectomy and urethrectomy with Indiana pouch, with final pathology demonstrating prostatic stromal invasion, as well as bilateral ureteral CIS with a positive margin for CIS of the left ureter. Dr. Lerner emphasized that while he tries to get a negative CIS margin on the ureter, there is only so much ureter you can resect without performing a nephroureterectomy, thus this patient is at increased risk of upper tract recurrence.

Dr. Downs highlighted that the AUA guidelines state that in a patient with persistent or recurrent disease or positive cytology following intravesical therapy, consider performing prostatic urethral biopsy and an upper tract evaluation prior to administration of additional intravesical therapy (Conditional Recommendation; Grade C). Early work demonstrated that among 62 patients with failed BCG therapy and subsequently underwent cystectomy, prostatic urethral urothelial carcinoma was the most important predictor of muscle-invasive cancer (HR 12.2, 95% CI 2.2-65.5), thus sampling of the prostatic urethra in high-risk patients is essential. With regards to the risk of a second primary tumor in the upper tracts and urethra, among 110 patients with high-risk NMIBC with BCG refractory disease and long-term follow-up (9 years), 52% had upper tract and/or urethral carcinoma. Among these patients, 75% had CIS, which was the only predictor of upper tract/ and or urethral carcinoma.

Dr. Downs emphasized that we cannot underplay the importance of a quality TURBT. Thus, in his opinion, all intravesical therapy is adjuvant therapy, and that marginal therapies work best in the face of minimal disease; complete resection improves the efficacy of all these drugs. The FDA also recognizes this in the importance of trial design and patient eligibility, highlighting that “Because the methods of a urologist performing the cystoscopy can affect both patient eligibility and outcome, sponsors should ensure that all participating urologists perform and document their bladder examinations according to the protocol.”

This was a 59-year-old construction work that underwent BCG for CIS and 3 months later had persistent CIS with new high grade Ta disease. He elected for a second induction course of BCG and 3 months following this his cystoscopy reveals two sessile tumors that upon TUR reveal high-grade T1 with a focus of LVI. Both Dr. Lerner and Dr. McKiernan agree that this patient has too many high risk features to offer other bladder sparing options and would offer radical cystectomy, which the patient subsequently received. Dr. Downs notes that the AUA guidelines suggest that in high-risk patients with persistent or recurrent disease within one year following treatment with two induction cycles of BCG or BCG maintenance, a clinician should offer radical cystectomy (Moderate Recommendation, Grade C). Furthermore, very high-risk NMIBC should be treated with intravesical therapy if they are fit for surgery, including those with variant histology, LVI, multifocal/large volume, T1 high grade disease, or those with prostatic urethral involvement. Several studies have shown that progression from NMIBC to MIBC is worse for patients that are BCG unresponsive compared to those that are de novo.

The third case highlighted by Dr. Lerner was a 78-year-old male who 3 years ago presented with a positive cytology and negative bladder biopsy. Three months later he had persistent cytology (again, bladder biopsy negative), followed by a biopsy with blue light cystoscopy that showed multifocal CIS. He then underwent BCG induction, but 6 weeks after induction his cytology was still positive, and biopsies showed multifocal CIS. He then underwent re-induction BCG and 15 months after his initial diagnosis he had a positive cytology and multi-focal CIS. He then had maintenance BCG x3, but still had multifocal CIS. He was then treated with nadofaragene firadenovec and has had a durable complete response for 48 months. As follows is a summary of his time-line: 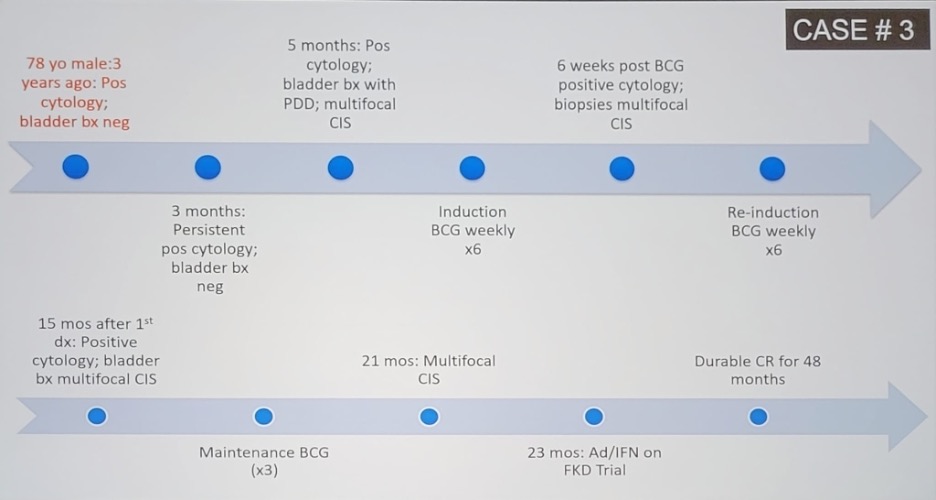 Dr. Lerner then highlighted the key Instillidrin trial,2 noting that nadofaragene firadenovec is a recombinant adenoviral vector-based intravesical therapeutic that delivers a copy of human IFNa2b gene to urothelial cells. This phase 3 trial in high-grade BCG-unresponsive NMIBC reported a 60% complete response rate in the efficacy population at 3 months, and this response was maintained in 51% of patients at 12 months. 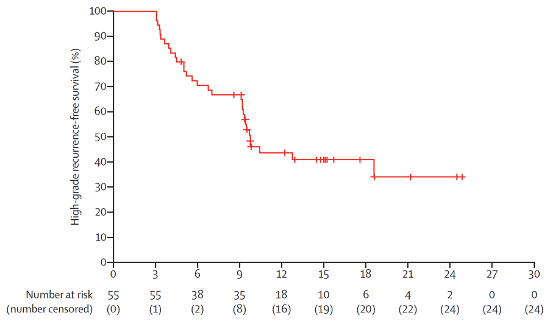 This was a 64-year-old Vietnam veteran that had relapses with CIS 9 months after two induction courses of BCG and stated that he will never undergo a radical cystectomy. He subsequently responds to induction gemcitabine + docetaxel and continues on maintenance therapy monthly for 14 months where at which point he presents with focal CIS of the bladder and a negative CT urogram. Dr. McKiernan notes that by the “rule book” of the FDA he is not BCG unresponsive given how long it has been since he last received BCG, but clinically in his opinion he is BCG unresponsive. The patient continues to refuse cystectomy and elects for IV pembrolizumab and is currently disease free at 12 months on Q3 weekly pembrolizumab. Dr. Lerner then highlighted the KEYNOTE-057 trial,3 for which pembrolizumab was approved in January 2020 for treatment of patients with BCG-unresponsive high-risk non-muscle invasive bladder cancer with CIS with or without papillary tumors who are ineligible for or have elected to not undergo cystectomy based on interim results from 96 patients in this open-label, single-arm, multicenter, phase II trial. Among patients with CIS along (64%), 40% had a complete response at 3 months, and among those patients 53% maintained a complete response greater than 9 months. Over a median follow-up of 24.3 months, the median duration of complete response was 16.2 months. However, Dr. Lerner notes that the 1-year complete response rate is only 19%, which he says we must strive to improve upon.

SWOG S1605 was a phase II \trial testing systemic atezolizumab (1200 mg IV) every 3 weeks for patients with histologically proven BCG-unresponsive high risk NMIBC who were unfit for or declined radical cystectomy. The Kaplan Meier estimate of 12 month (actual 11.9 months) duration of response after 6 month complete response for CIS patients was 48.9% (95% CI 25.4% to 72.4%) and the median duration of response was 15.4 months: 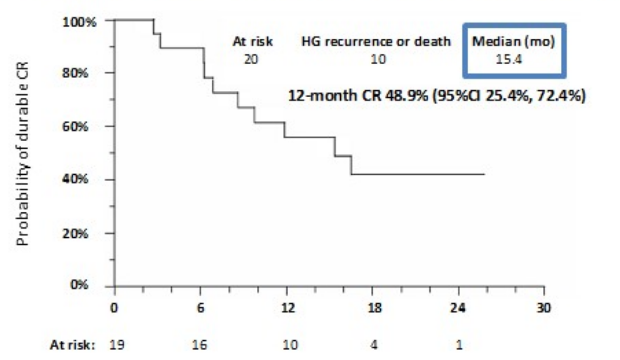 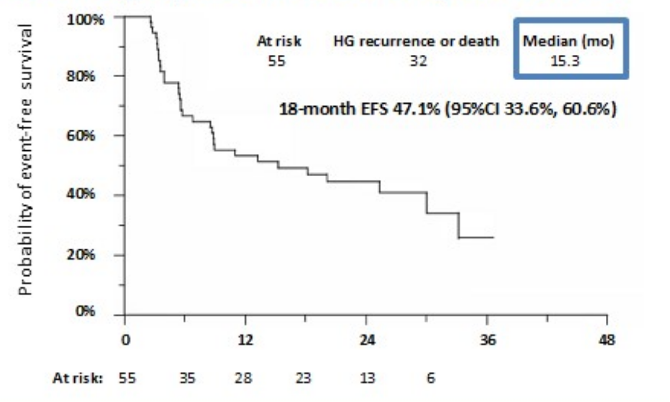 The AUA/SUO guidelines state that for patients with intermediate/high risk NMIBC within 12 months of adequate BCG and are unfit or unwilling to undergo a radical cystectomy, a clinician may recommend a clinical trial or alternative intravesical therapy (ie. valrubicin, gemcitabine, docetaxel, combination chemotherapy).

This patient was a 79-year-old female with a bleeding disorder and recurrent CIS after 6 months of BCG maintenance therapy. She subsequently enrolled in a clinical trial of intravenous pembrolizumab in conjunction with intravesical gemcitabine, does not respond, and now has CIS with high grade T1 recurrence at 3 months. She then opted for an intravesical chemotherapy trial using gemcitabine, cabazitaxel, and cisplatin and responds to treatment, now receiving monthly maintenance for 1 year and remaining without evidence of disease. Dr. Downs highlighted the following single agent trials in the BCG unresponsive disease space: 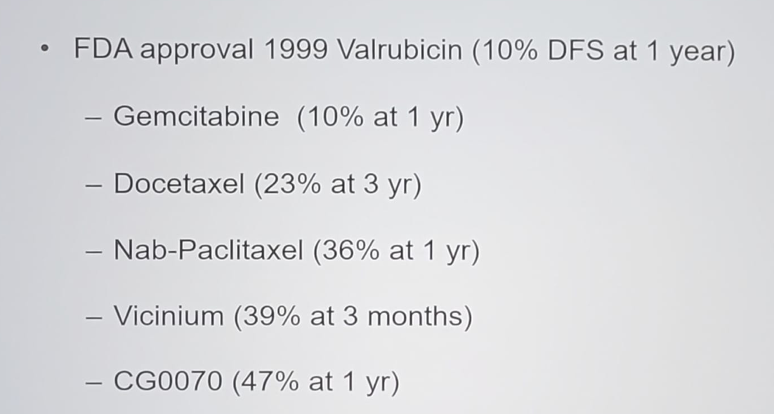 Dr. Lerner notes that historically definitive radiotherapy has had a limited role in NMIBC. However, previous studies have retrospectively reported that patients with high-risk disease treated with platinum-based chemoradiotherapy may achieve complete response rates of 88%, and 5 and 10-year recurrence rates of 19% and 30%, respectively. Importantly, the effectiveness of radiotherapy declines in patients with CIS. The prospective RTOG 0926 trial presented at ASTRO 2021 tested chemoradiotherapy with 5-FU and mitomycin following BCG failure for T1 high-grade disease and reported a freedom from cystectomy rate of 88% at 3 years of follow-up.

Intravesical/intravenous combinations are also of interest in this disease space. Presented at AUA 2021, a combination of vicinium (30 mg weekly for 12 weeks) + durvalumab (1500 mg IV monthly) for one year reported 12 patients in a phase 1 trail and a 12-month complete response rate of 17%. Presented at SUO 2021, Dr. Roger Li reported that the combination of pembrolizumab the oncolytic adenovirus CG 0070 lead to a complete response in the first 9 patients, with minimal adverse events, and continues to be assessed in the Moffitt Cancer Center’s CORE 1 trial.

Dr. Downs concluded this plenary session noting that the future in this disease space is bright: