ORLANDO, FL USA (UroToday.com) - The proto-oncogene c-MYC, located on chromosome 8q, can be up-regulated through gain of 8q causing alteration in biology of renal cell carcinoma (RCC). The aim of this study was to evaluate the prevalence of chromosome 8q gain in our renal cancer tumor registry and to correlate findings with tumor histology, grade, cancer specific survival (CSS), and overall survival (OS) in clear and papillary RCCs.

In the study, cytogenetic analysis by conventional or chromosomal microarray analysis (CMA) was performed on tumors of 414 patients who underwent radical or partial nephrectomy for suspected RCC. Non-clear RCC, non-papillary RCC, and those which did not show alteration or gain in chromosome 8 on cytogenetic analysis were excluded from the study. Impact of gain in chromosome 8q status on CSS, OS, and its correlation with clinico-pathological variables, obtained from our prospectively maintained kidney cancer database, were evaluated and compared to RCCs that did not have gain in chromosome 8q. CSS and OS were assessed using log-rank test and the Cox proportional hazards model. After the exclusions total 279 clear cell and papillary RCC tumors with cytogenetic analysis were included in study. Gain of 8q was detected in 18 (6.5%) tumors (9 clear cell, 3 sarcomatoid variant, and 6 papillary RCC), using either conventional method (11) or CMA (7). 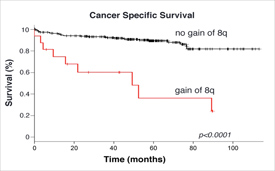 Chromosome 8q harbors the proto-oncogene c-MYC, which can be up regulated by gain of 8q. Findings from this study suggest that gain of 8q, shown by cytogenetics, can predict aggressive tumor phenotype and inferior survival in patients with RCC. These findings may help clinicians to identify high risk patients and enroll them into neoadjuvant and adjuvant clinical trials.