ORLANDO, FL USA (UroToday.com) - Inflammatory markers are known to predict outcomes in patients with hepatic, gastric, pancreatic, and kidney cancers. As such, authors sought to confirm initial data regarding the prognostic relevance of preoperative NLR for OS in patients undergoing RC for urothelial carcinoma of bladder. A retrospective analysis on the Fox Chase Cancer Center institutional bladder cancer database was performed and identified patients who underwent radical cystectomy from 2006 to 2011. Patients with available preoperative hematologic parameters for absolute lymphocyte and neutrophil count, within 1 month of RC, were included in the analysis. As previously reported, NLR ≥ 2.5 was considered abnormal. Prognostic value of preoperative NLR was evaluated by univariate and multivariable Cox and Fine & Gray proportional hazard ratios to assist in risk stratification for OS. 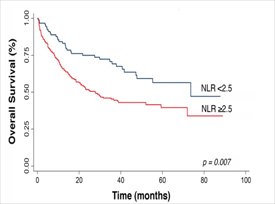 Over the last decade, there has been increasing evidence that cancer-related inflammation is a major determinant of outcome in cancer patients. The systemic inflammation initiated by tumors known to cause apoptosis and/or margination of the white blood cells leading to a drop in lymphocytes, and perhaps this tumor-associated immune dampening is one of the reasons for poor survival in cancer patients. Here, as shown for various other cancers, NLR was found to be an independent prognostic factor in bladder cancer patients treated with RC . Further investigation into whether NLR can be harnessed for purposes of clinical prognostication and individualized patient care appears warranted.